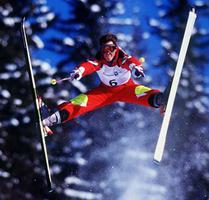 Jean-Luc Brassard, freestyle skier (b at Valleyfield, Qué 1972). At age 8 Brassard began skiing on a small hill near his home. He quickly tired of traditional skiing and discovered competitive moguls. Brassard developed rapidly, joining the national team at 17 and winning his first World Cup race at 18.

He became a serious contender at every World Cup event, winning 10 before capturing the 1993 world championship. Brassard suffered through a poor season in 1993-94 but rebounded at the 1994 Olympic Games with a spectacular performance, defeating the defending champion and winning the gold medal on 16 Feb. With yellow patches on his knees to highlight his flawless technique, Brassard edged out Russian Sergei Shupletsov by a mere 0.34 points. He added to his successes by winning the Canadian title in 1995 and the World Cup in 1996 and again in 1997. He was selected to carry the flag for Canada in the opening ceremonies of the 1998 Olympic Games in Nagano, but was unable to reach the medal podium during those games. Brassard finished 4th in the 1998-99 World Cup standings. It was the first time in 9 years that he did not finish the season in the top 3 rankings. He suffered a serious knee injury during the 2000 World Cup finals and was unable to compete during the 2000-2001 season. He was, however, able to return in time to qualify for the 2002 Salt Lake Olympic Games, where he placed 21st in the men's moguls event. He retired from professional competition in 2004.

Brassard is also known for extensive charity work, including his annual tour with "Enfants du Soleil," the French division of the Children's Miracle Network. He was given the 2000 Gillette Sport Award in recognition of his dedication to charity work. In 2010 he was inducted into CANADA'S SPORTS HALL OF FAME.