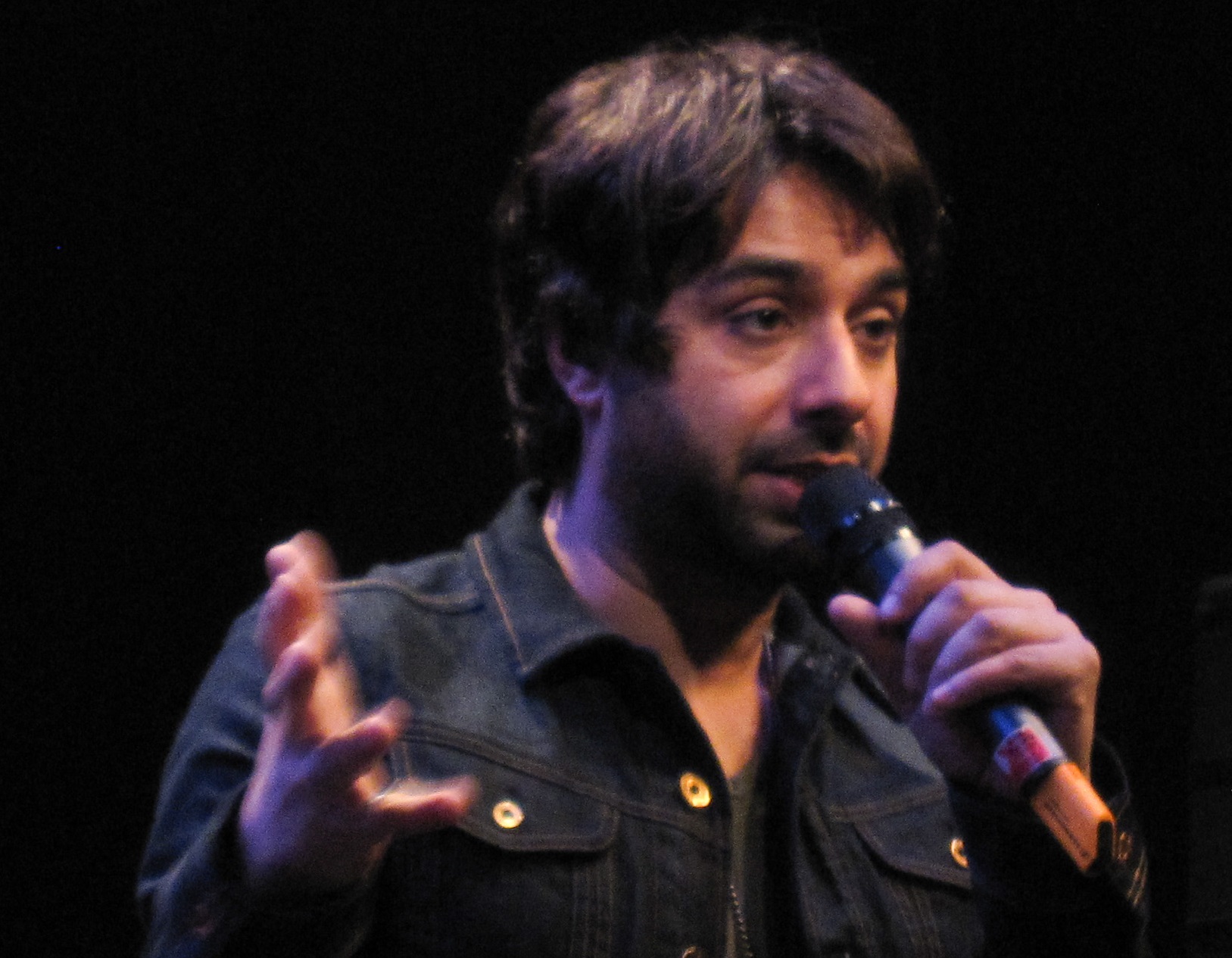 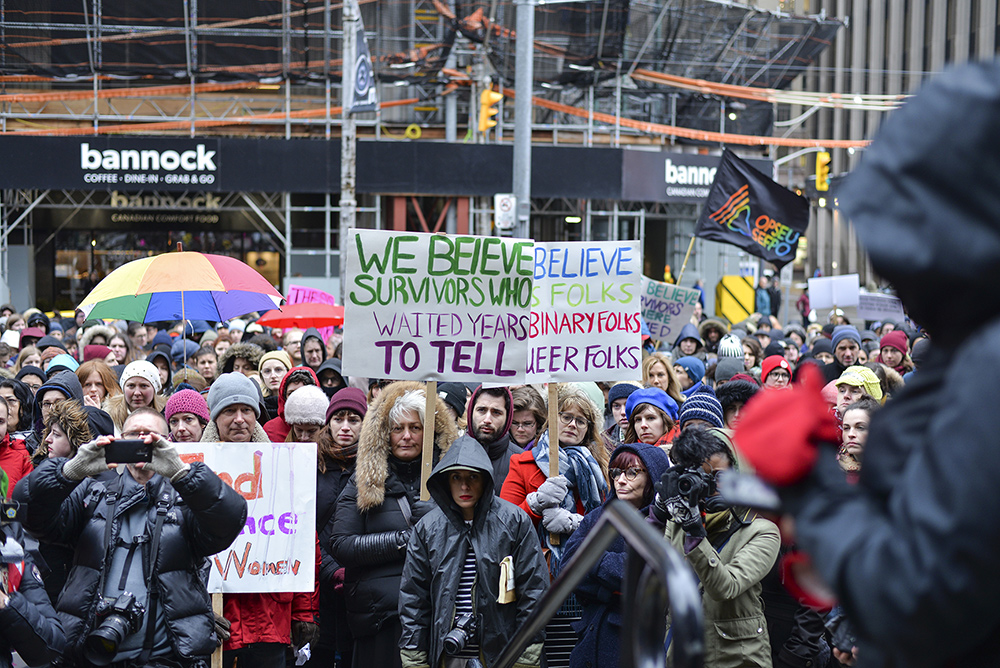 Hundreds marched to police headquarters Thursday evening, just hours after Jian Ghomeshi was found not guilty of sexually assaulting three women. At least 300 people, including men and women, walked from Old City Hall to Toronto Police headquarters, joining up with a group of Black Lives Matter Toronto protesters. Chants of "We believe survivors!" and "Our bodies, our lives, we will not be.
PreviousNext

Jian Ghomeshi was born in London, England, to Iranian parents and moved with them to the Toronto suburb of Thornhill in 1974. He attended Thornlea Secondary School and became friends with Murray Foster, with whom he formed the new wave band Tall New Buildings in 1983. The group released two EPs and had a minor hit with the Ghomeshi-written single “Breaking Her Walls” before disbanding in 1988. Ghomeshi attended  York University, where he received a Bachelor of Arts in political science with a minor in women's studies.

Jian Ghomeshi, Murray Foster and fellow high school friends Mike Ford and David Matheson gained a following busking in Toronto as the group Moxy Früvous. They caught the attention of a CBC Radio producer who enlisted them to perform on and write satirical songs for the drive-time program, Later the Same Day.

Moxy Früvous issued a self-titled and independently produced cassette in 1992 that sold more than 50,000 copies in Canada on the strength of such popular songs as “King of Spain” and “My Baby Loves a Bunch of Authors.” Warner Music Canada signed the band and released the platinum-certified Bargainville (1993), which included five songs from the debut along with several new songs, including the Top 10 single “Stuck in the 90s.”

This proved to be the group’s commercial high point. While they continued to tour extensively and enjoyed a cult following, particularly on the US college circuit, subsequent records Wood (1995), The ‘b’ Album (1996), You Will Go to the Moon (1997), Live Noise (1998), Thornhill (1999) and  The ‘c’ Album (2000) failed to deliver similar sales. Moxy Früvous dissolved in 2001. Ghomeshi released a solo EP titled The First 6 Songs in July 2001 before transitioning into a new career.

In 2002, Jian Ghomeshi became host of CBC Newsworld's >play, a show about the arts in Canada and abroad. He held that position for three seasons while also doing entertainment reports for the Toronto edition of the early-evening CBC TV national news program, Canada Now. Ghomeshi hosted 50 Tracks, which dealt with the most essential pop-rock songs in history, and 50 Tracks: The Canadian Version on CBC Radio in 2004 and 2005, respectively. He then hosted the similar CBC Radio show The National Playlistin 2005–06. He also presented a number of television documentaries, including The End, Screw the Vote and Philanthropy Inc.

Ghomeshi’s most successful broadcasting run began in April 2007 when he became host of CBC Radio One’s Q, which also aired on more than 180 stations in the United States via Public Radio International. The daily arts, culture and entertainment talk show was the highest rated program in its time slot in CBC history and attracted a variety of high-profile guests. Perhaps the most noteworthy segment in Ghomeshi’s time at Q was an interview he did with actor and musician Billy Bob Thornton and his band, The Boxmasters, on 8 April 2009, during which Thornton was rude, contemptuous and openly hostile towards Ghomeshi.

Footage of interviews and musical performances collected from the Q radio program also aired on CBC Television and YouTube. The show began to be syndicated in September 2014 to commercial television stations in the US through PPI. Ghomeshi’s high profile and fluid public speaking skills also resulted in an active side-career as a host and master of ceremonies for many events and awards, including the Polaris Music Prize and  Dora Awards ceremonies, among others.

Ghomeshi was fired on 26 October 2014 after the CBC said it received “information” that “precludes us from continuing our relationship with Jian.”

Ghomeshi formed a management and production company called Wonderboy Entertainment, whose clients included singer-songwriters Martina Sorbara and Dar Williams. His longest and most successful association was with Juno Award-winning electro-pop artist Lights, whom he managed for 12 years.

Jian Ghomeshi’s writing has been published in The Washington Post, The Guardian, the Globe and Mail, the Toronto Star, the  National Post, El Mundo and The International Herald Tribune. His 2012 memoir, 1982, intertwines stories of his experiences growing up with the songs and musical moments that changed his life while he was in high school. It received mixed reviews and became a Canadian best seller. Penguin Random House Canada was set to publish a second book but cut ties with Ghomeshi in November 2014 following allegations of sexual assault.

Jian Ghomeshi was tried in February 2016 and found not guilty on four counts of sexual assault and one count of overcoming resistance by choking. He was scheduled to face a second trial in June 2016 on one remaining charge of sexual assault. However, he avoided this trial by signing a peace bond and issuing a formal apology to the complainant on 11 May 2016. (See also: Jian Ghomeshi Case.)

Jian Ghomeshi has largely disappeared from the cultural scene since allegations of sexual assault surfaced in 2014. In 2017, he launched the Ideation Project, a podcast and music series featuring original work by Ghomeshi. The series began with a podcast on “exiles” and has since covered a range of topics, including social media, fearmongering and the treatment of elders in Western society. The debut podcast was covered in many mainstream publications, including the Toronto Star and Globe and Mail, which called it a “less-than-triumphant return.” The most recent podcast was released in June 2017.

In 2018, Jian Ghomeshi reflected on the allegations of sexual assault and his subsequent fall from grace in an essay published in the New York Review of Books. The article, “Reflections from a Hashtag,” was published online in September. In the essay, Ghomeshi apologized for the way he had treated people but maintained that some accusations were “inaccurate.” The title was a reference to the #MeToo movement. "I've become a hashtag,” he wrote. “One of my female friends quips that I should get some kind of public recognition as a #MeToo pioneer. There are lots of guys more hated than me now. But I was the guy everyone hated first."

The backlash on social media was immediate. Many were angered by Ghomeshi’s remarks about the #MeToo movement and felt that the essay demonstrated no real remorse from the author but was instead designed to elicit sympathy for him. Many social media users also criticized the decision to publish the essay in such a prestigious publication. Editor Ian Buruma defended his decision, stating that he felt it provided an angle on the #MeToo movement that had received little attention. “I think nobody has quite figured out what should happen in cases like his,” he told Isaac Chotiner for Slate magazine in 2018, “where you have been legally acquitted but you are still judged as undesirable in public opinion, and how far that should go, how long that should last, and whether people should make a comeback or can make a comeback at all.”