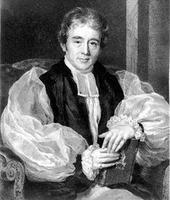 An eloquent speaker and a relentless publicist for Anglican rights, Inglis found himself out of step in the liberal climate of the reform era (courtesy Metropolitan Toronto Reference Library/T31718).

John Inglis, Church of England bishop (b at New York 9 Dec 1777; d at London, Eng 27 Oct 1850). Son of Charles INGLIS, the Church of England's first bishop of Nova Scotia, he entered the ministry in 1802, after studying at King's College, Windsor, and soon took charge of diocesan church affairs for his ailing father and then for the nonresident second bishop until his own episcopal appointment in 1825. His diocese included NS, PEI, until 1839 Newfoundland and Bermuda, and until 1845 New Brunswick. Inglis's preoccupations were maintenance of the privileges of the established church; opposition to evangelical tendencies within his own denomination, which produced serious divisions, especially in Halifax; and fund raising for the church in a period of declining British grants and increasing colonial hostility to his exclusivist aims. An eloquent speaker and a relentless publicist for Anglican rights, he found himself out of step within the liberal climate of the reform era and his minimal achievements left him embittered.