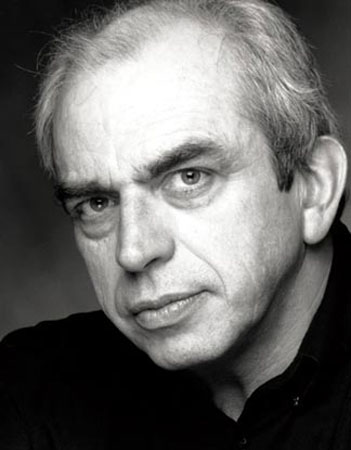 Julien Poulin, Québec actor (born 20 April 1946 in Montréal, Québec). An actor by training, Julien Poulin has been involved in many spheres of the world of entertainment. He has worked not only as an actor but also as a director, producer, and screenwriter in Québec film and television. He is known especially for playing the comic character Elvis Gratton in a series of films that he co-wrote and co-directed with Pierre Falardeau. In the course of his career, Poulin has appeared in over 100 films.

Poulin became enthralled with theatre at an early age, enrolled in intensive acting courses, and began landing small roles in various productions in 1960, when he was still a young teen. But his acting career really began when he joined Paul Buissonneau and La Roulotte — a travelling outdoor theatre company sponsored by the City of Montréal. Poulin acted with La Roulotte from 1965 to 1969. In the 1970s and 1980s, he spent more and more of his time directing the company’s productions.

In the 1990s, Poulin returned to acting for good, appearing notably as the brewmaster in the Vaclav Havel play Audience at the Théâtre de la Récidive. In 1996, Poulin delivered an outstanding turn as an actor in a production called 38 at the Théâtre d’Aujourd’hui, in which 38 playwrights less than 38 years old presented freely adapted versions of 38 plays by Shakespeare. At the same time, Poulin began a fruitful collaboration with Dominic Champagne, appearing in a number of plays that he directed, including Lolita from 1995 to 1997 (Théâtre de La Manufacture), Korsakov in 1997 (Théâtre Il va sans dire), La Caverne in 2001 (Théâtre Il va sans dire and Théâtre d’Aujourd’hui) and Paradis Perdu in 2010 (Théâtre Maisonneuve). Also in 2010, Poulin played an unforgettable Casanova in La fin de Casanova (Théâtre Ubu).

In addition to acting in film, Poulin has written and directed a number of films in which he expresses his political and social views, such as À force de courage (1977), Pea Soup (1979)and Speak White (1980). But it is through the character of Elvis (Bob) Gratton, whom he co-created with director Pierre Falardeau shortly after the failure of the first Québec referendum on sovereignty-association, that Poulin offered some of his most scathing comments about Québec identity. A perfect embodiment of the cynicism of the times, Elvis Gratton is a caricature of a highly Americanized Québec federalist who is incapable of defining his own cultural identity.

Though Poulin achieved the peak of his popularity with Elvis Gratton, he continued to be seen everywhere, both in films and on television. He worked not only with Denys Arcand, Jean Beaudin and Pierre Falardeau, but also with Richard Ciupka in Le dernier souffle (1998), a role that earned Poulin a Jutra Award. In 2001, he worked with Falardeau again on the film 15 février1839, which recounts the final hours of Chevalier de Lorimier, a hero of the Rebellion in Lower Canada. In 2002, Poulin played Père Ovide in Séraphin, un homme et son péché, by Charles Binamé. In 2004, he played a police inspector in the US production Taking Lives.

In 2012, director Rafaël Ouellet’s film Camion, in which Poulin played the leading role, received the prestigious Ecumenical Jury Award at the 47th Karlovy Vary International Film Festival, in the Czech Republic. In 2013, Poulin also received a Jutra Award for Best Actor for this role. In 2014, he appeared in the film Miraculum, directed by Daniel Grou (also known as Podz) and written by Gabriel Sabourin.

In addition to acting in these well-known films, Poulin has made many appearances on television. He has played various roles in shows written by Victor-Lévy Beaulieu (Super sans plomb, Blanche, Montréal P.Q.), Fabienne Larouche (Les orphelins de Duplessis, Le volcan tranquille, Virginie, Fortier III) and Lise Payette (Les machos). He also appeared in various episodes of Le négociateur I, II, III and has received a Prix Gémeaux for his touching performance as Gaétan in the series Minuit, le soir, directed by Podz. In 2010, Poulin played Rolland in the series Rock et Rolland. Since January 2016, he has been seen as François-Xavier Laloge, Donalda’s father, in the historical series Les pays d’en haut, based on Claude-Henri Grignon’s novel Un homme et son péché.