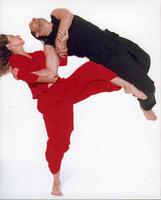 Kaeja d'Dance, a Toronto-based dance company, was founded in 1991 by Karen Kaeja and Allen Kaeja, co-artistic directors and husband and wife. Kaeja d'Dance produces contemporary dance for stage and film while operating one of the most successful dance education programs in the city, reaching more than 4000 students a year. Their book Express Dance is the most popular teacher resource for grades 4 to 12 dance curriculum in Ontario. When not in rehearsal or performance, their set company of 6 dancers guest-teach in the school system, implementing the Kaejas' "express dance" approach.

Kitchener-born Allen and Toronto-born Karen share a love of contact improv (weight-bearing lifts using all parts of the body), through which they developed the acclaimed Kaeja partnering techniques rooted in "anchor throws." The latter is a fusion of martial arts and contact improv where, regardless of strength, size and gender, partners are able to propel one another through space in an explosion of energy that seems to defy gravity. Karen Kaeja and Allen Kaeja are on the faculties of Ryerson University's dance department and the School of Toronto Dance Theatre, teaching both technique and dancefilm.

For Toronto's Nuit Blanche 2007, Karen Kaeja co-created a site-specific work set in the stables of historic Casa Loma that was deemed the most innovative event of the festival. (Nuit Blanche features indoor and outdoor performances, installations and art exhibits throughout the city from 7 p.m. to 7 a.m.).

Allen Kaeja's choreography deals with issues such as child abuse, dysfunctional families and the Holocaust. His background in wrestling and judo is reflected in movement that is highly physical, controversial and risk-taking. Karen Kaeja's more lyrical, intimate and detailed works focus on personal relationships. Both believe in multidisciplinary arts and have always collaborated with playwrights, composers and designers in their pieces. They have also crossed boundaries to work in theatre and new opera. Their choreography and dancefilms have been seen in many countries.

Allen and Karen Kaeja and company dancers received the 2000 Toronto's Moving Pictures Festival of Dance on Film and Video best performance award for Zummel. Kaeja d'Dance was honoured with the 2002 American Dance Festival Certificate of Distinction for Resistance. The company has been in the forefront of the Dance on Screen movement, and its dancefilms have been honoured with nominations from the GEMINI AWARDS (2004), American Choreography Awards (2004), Banff World Television Awards (2006) and Barcelona's IDN Festival of Dance and the Moving Image Awards (2007).