This article was originally published in Maclean's Magazine on March 30, 1998

Leave it to Ken Finkleman - and perhaps only Ken Finkleman - to come up with a statement so outrageous, so potentially offensive and, at the same time, so perceptive.This article was originally published in Maclean's Magazine on March 30, 1998 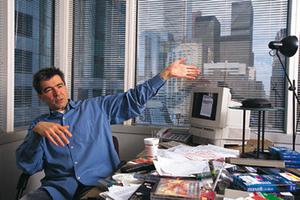 Ken Finkleman is the creator and star of the television shows The Newsroom and More Tears (courtesy Maclean's).

Ken Finkleman is on. His arms wave in the air, his face contorts in thought, his words tumble out in machine-gun staccato, rat-a-tat-tat. The subject is TV news - a favorite - and Finkleman doesn't sermonize so much as strafe. "A plane goes down, 350 people are killed, and the TV cameras go out and shoot the family members crying. I don't think they should do that, because it is implicit in the fact - 350 people killed - that there's going to be family members crying." Finkleman pauses, not to gather breath, but for effect. "Now, I guarantee you somewhere at that airport there's a wife, and her husband was on that plane, and he was on a business trip, and he took his secretary with him, and he was f-ing her, and the wife knew. And now, the wife's standing at the airport and she's saying, 'Serves that c-sucker right.' " Another pause, and Finkleman's steely eyes glare out across his desk, searching for a reaction. "They don't show that story, do they? When was the last time you saw a story about a plane crash and somebody said, 'Good!' "

Leave it to Ken Finkleman - and perhaps only Ken Finkleman - to come up with a statement so outrageous, so potentially offensive and, at the same time, so perceptive. It was, after all, that combination that made The Newsroom, which skewered TV journalism with its depictions of simpering-idiot newsreaders and amoral executives, such a hit last year. The CBC series - created, co-written and starring Finkleman as the muffin-obsessed producer George Findlay - was hailed as that most un-Canadian of achievements: a genuinely funny sitcom. It transformed the practically unknown native Winnipegger, now 52, into a Canadian celebrity ("That's an oxymoron," Finkleman points out). The Newsroom won five awards at this month's Geminis. And it helped make his new series - a four-part satire debuting on March 30 - perhaps the most anticipated event on CBC this season.

But with More Tears, a dark, disturbing and sometimes off-putting satire that is either sheer genius or complete madness, Finkleman might well have pushed the satiric envelope too far for TV audiences to accept. And he knows it. "I think people will watch the first show, only because of the publicity," he tells Maclean's during a two-hour interview in his modest office, tucked into the labyrinthine CBC Broadcast Centre in downtown Toronto. "After the third one, they'll all just be scratching their heads. And then I think all that'll be left will be some kind of hard-core audience of about 150." The funny thing is, that seems to suit Finkleman just fine.

For months, his next project has been the buzz of Toronto media circles: what will it be? will it be as good? Meanwhile, the actor-director was adamant that The Newsroom was history. "Who would want to do that any more?" he asks. "It was over. It was drudgery." And Finkleman clearly had enough of the situation-comedy routine. During the 1980s, he slugged it out in Los Angeles writing sitcoms and developing TV concepts (as well as directing a few B-grade movies, like Airplane 2) that rarely saw the blue light of broadcast. "If you're working for the Americans, you're interested in making the deal," he says. "The deal is the orgasm - the production is like trying to get the woman out of your apartment."

So, he came up with something different - very different. While The Newsroom was focused on character, More Tears is a highly political and at times didactic satire. The sole hold-over from The Newsroom is George Findlay, who (as Finkleman describes him) is "this completely disconnected, completely f-ed-up character." He is unable to commit to his wife (Arsinée Khanjian) or either of his lovers (Larissa Laskin and Lou Thornton), and he goes through the motions as a news producer, chasing stories with all the passion and principle of an arms dealer. The moral centre is provided by George's lunch-buddy Shaffik (Hrant Alianak), a horny intellectual who spins off into harangues about right-wing politicians, media bias and the culture of consumerism.

Kind of like Finkleman himself, who in conversation takes the word "tangential" to new heights. He declines to talk about his personal life (he lives in Toronto with Marion Cohen and their two preteen children); he prefers to talk about ideas. And the Big Idea he has now - the central theme of More Tears - is the way the media impose digestible narratives on events. "Hollywood says there are only five or six story lines the audience can understand, and the media use these stories, impose these narratives," Finkleman declares. "If people keep hearing these stories over and over again, they become disconnected with reality."

If asked, he provides plenty of examples of how the process works - pointing, for instance, to CTV News co-anchor Sandie Rinaldo ("That look of compassion she shows on a tragic story - that's a narrative"), to CBC National Magazine host Hana Gartner ("She feels"), and especially to the media canonization of Diana, Princess of Wales, since her death last year. "I mean, she went out with Dodi Al Fayed," he says, "and she married Prince Charles, so how great could she have been?" The modern malaise, to Finkleman, is defined by the triumph of feeling over truth. It is, he says, the technique Hitler used to sell Nazism to Germany, and the approach that Reform Leader Preston Manning takes when he stages flag debates in Parliament. "I'm not saying Manning is a fascist," adds Finkleman, "but his impulses are fascist."

In More Tears, feeling and truth play against each other in a constant dialectic. In the first episode, "Symbols," George and his on-air sidekick (gloriously played by Leah Pinsent, who both looks and sounds like Diane Sawyer) cover an archetypically sensational story: a baby is trapped in a well. As the media and politicians vie for ratings and votes, the dialogue is often hilarious. (George on the phone to his boss: "All we can do is hope and pray that she comes up in a decent time slot.") In the next episode, "Victims," the satire gets uncomfortable, as when Pinsent interviews a Nazi war criminal. "Those 11,000 people you allegedly murdered," she says. "How did you feel?"

As the show progresses through its three 30-minute episodes, it becomes darker, more extreme. In the last instalment, a 90-minute special titled "Nasty, Poor, Brutish and Short," George has a crisis of conscience, and decides to make a movie about the way people like him distort the news. George's movie-within-a-movie revolves around a provincial ministers' retreat in an unnamed northern location. As the politicians get increasingly drunk, violent and crude, a female police officer is raped and murdered. But the George clone (played with stunning vacuousness by Shift editor Evan Solomon) ignores the crime and focuses on the politicians' agenda - taping only their diatribes about welfare bums, immigrants and women.

It isn't funny. And clearly, it's not supposed to be. If The Newsroom took a cue from HBO's The Larry Sanders Show, then part of the inspiration for More Tears is Federico Fellini - in particular, the Italian director's La Dolce Vita and 8 ½. Finkleman says he is obsessed with them. "I believe that most truths in movies are in those two pictures," he says. But the references in More Tears to Fellini, especially to La Dolce Vita, in which Marcello Mastroianni plays a tabloid journalist, are not merely a homage: they also re-create a satiric ethic. "Fellini had an idea about the corruption of Rome," Finkleman says. "And I think that corruption exists here."

The last episode of More Tears is difficult to watch, virtually doing away with any of the standard sops to audience expectation. And in creating a show about cultural clichés, Finkleman runs the risk of writing himself into one that is older than TV: the hubris tragedy, with the talented hero who flies too close to the sun. Finkleman is aware More Tears might bomb - but contends he just doesn't care. During the Geminis, he recalls, he ran into a CBC executive who asked whether the show would get decent ratings: "I said, 'I don't think for a second about that, and you shouldn't either - you're a public broadcaster.' "

For now, Finkleman is brimming with ideas. A jazz buff, he often takes his inspiration from bits of music. Popping a CD of late-'50s swing into his office stereo, he runs through the opening scene of a movie he says he will probably never write. "Suburbs, guy comes out of his house, looks like Peter Gunn, 1960, kisses wife and kids, drives away." Hands poised like a conductor's as the horns blare in the background, Finkleman walks the hero to a gleaming skyscraper, past his secretary, into his office. "He closes the door, takes down one of those huge pieces of office art, a statue, from the bookcase, puts it in his briefcase, throws it through the window." A crescendo, another wave of arms. "Then he jumps out the window." The tune falls off to a rumbling funk, punctuated by drum riffs. "That boom there," he says, pointing at the CD player. "That's his head hitting the cement."