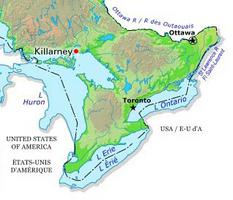 On the north shore of Georgian Bay, over 80 km southwest of Greater Sudbury, Ontario, Killarney Provincial Park (established 1964, 48.5 km2) is a vast tract of wilderness.The beauty and magnificent, unspoiled scenery of Killarney has inspired many artists, including members of the Group of Seven.

Natural History
The park's most striking feature is a series of rock ridges consisting mostly of white quartzite. These large, rounded hills are the remains of the La Cloche range, a ring of Precambrian mountains that once towered higher than the present-day Rockies. Over the last million years, numerous Ice Ages have scraped away the tops of the mountains, filled in some of the crevices between the bedrock outcrops and left innumerable sandy ridges marking the temporary shorelines of ancient meltwater lakes. Along these former shorelines, archeologists have uncovered evidence of 3 prehistoric encampments (9000, 6500 and 1500 years ago.)

In the transition zone between the Boreal Shield and Mixed Wood Plains natural regions, Killarney has a wide variety of plant and animal life. Maple is the dominant tree along the southern boundary of the park, growing alongside species rarely found this far north such as black cherry and American beech. Eastern white and red pine, oak and hemlock are the dominant species in the more northerly interior. Orchids, northern ferns, alders and cattails grow in marshes around beaver dams.

More than 100 species of birds breed in the park. Among the smaller mammals living here are red squirrel, eastern chipmunk, beaver, snowshoe hare, muskrat and weasel. Larger mammals include white-tailed deer, bobcat, moose and black bear. The lakes do not support large communities of fish and aquatic plants owing to the effects of acid rain from industrial pollution far outside the park, compounded by the naturally occurring acidity of the park's quartzite deposits.

Facilities
With its many lakes and an interconnecting network of rivers and portages, Killarney is a favourite destination for canoeists. Motor boats are prohibited on the interior lakes to ensure a peaceful wilderness experience. Park visitor facilities include campgrounds, an extensive network of hiking trails and organized nature programs.