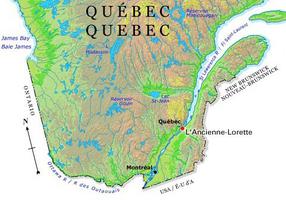 L'Ancienne-Lorette, Qué, City, pop 16 516 (2006c), 15 929 (2001c), inc 1967. L'Ancienne-Lorette is located on the North Shore of the St Lawrence River, 13 km west of QUÉBEC CITY. First incorporated as a village under the name of Notre-Dame-de-Lorette in 1948, this residential suburb of Québec City grew rapidly from the 1960s, just like most of its neighbours, Cap-Rouge, SAINTE-FOY and Saint-Augustin-de-Desmaures.

The history of L'Ancienne-Lorette goes back to 1674, when the Jesuit Pierre Chaumonot (1611-93) built a chapel on this site for the HURONS who had been forced to flee their homeland (Ontario) by the Iroquois. The original church of L'Ancienne-Lorette, Notre-Dame-de-l'Annonciation, was set up as a mission in 1698, the year following the departure of the Hurons, who had moved northwards, closer to their hunting grounds.

The old village centre along rue Notre-Dame is rich in architectural heritage and parks. Notre-Dame-de-l'Annonciation church, however, with its 2 impressive steeples, monopolizes the attention of visitors. L'Ancienne-Lorette's city centre also contains the Théâtre de la Fenière, the oldest and best-known of Québec's summer theatres.