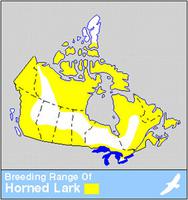 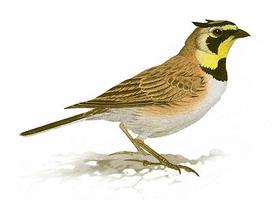 The very long and sharp hind claw is characteristic of the lark (Macmillan Illustrated Animal Encyclopedia). 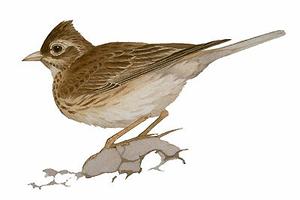 Lark is a common name for small songbirds of the primarily Old World family Alaudidae.

The hind claw is long and sharp; wings are long and pointed. Characteristically, they run or walk, rather than hop. Both sexes are similarly coloured, mainly in subdued browns, which blend with their usual surroundings; young are spotted. Many larks have elaborate, impressive flight songs.

Larks inhabit open country and are ground dwelling. Of the world's 75 species, 2 occur in Canada. The horned lark (Eremophila alpestris) is a native, Holarctic species found throughout Canada. Fond of open expanses, it breeds across prairies, arctic and alpine tundra and sea coasts, even in airports, cultivated fields and pastures. In settled areas, horned larks eat quantities of weed seeds and insects.

The Eurasian skylark (Alauda arvensis), introduced in 1902-03, is now resident on southern Vancouver Island. The population remains low and has spread little. The skylark's song is immortalized in English poetry and prose.

The meadowlark is not a lark.