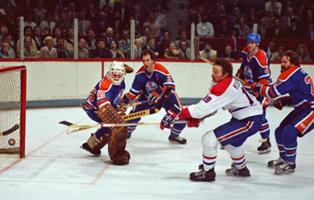 Laurence Clark Robinson, "Larry," hockey player (b at Winchester, Ont 2 June 1951). He was a first-round selection for the MONTREAL CANADIENS in the 1971 NHL draft and, after a year and a half in the American Hockey League, was called up to play on the Canadiens' 1973 STANLEY CUP winning team. The tall redhead became the anchor of a great defence corps, leading Montreal to 5 more Cups, 4 between 1976 and 1979 and a fifth in 1985-86. Robinson became a free-agent after the 1988-89 season and signed with the Los Angeles Kings. He played there for 3 more seasons, retiring in 1992.

During his twenty-year career, Robinson's teams never failed to make the play-offs. Gordie HOWE is the only other player ever to appear in the play-offs 20 times. His 228 play-off games played is an NHL record. He scored 208 goals, 750 assists and 958 points during his career and added 28 goals and 116 assists for 144 play-off points. He won the JAMES NORRIS MEMORIAL TROPHY (1977, 1980), the CONN SMYTHE TROPHY (1978) and 3 NHL all-star awards. Robinson was inducted into the HOCKEY HALL OF FAME in 1993, and in 2007 the Canadiens retired his jersey (#19).

In 1993 Robinson was hired as an assistant coach for the New Jersey Devils, winning one Stanley Cup with the team in 2000. He remained in the position until 2002 and is currently a special assignment coach for the team.