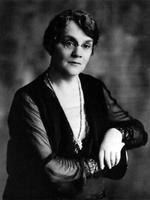 Lillian Kathleen Thomas, née Beynon, journalist, author, suffragist (born 4 September 1874, King Township, ON; died 2 September 1961, Winnipeg, MB). Lillian Beynon Thomas was a newspaperwoman and author. She was active in the women’s suffrage campaign in Manitoba, which won women the right to vote at the provincial level in 1916.

Lillian Beynon was the second child born into a farming family of three girls and four boys. Her parents, Rebecca Manning Beynon and James Barnes Beynon, were strict Methodists living at the time of Lillian’s birth in King, Ontario — a community north of Toronto. Rebecca was involved in the Woman’s Christian Temperance Union. Both parents did everything they could to ensure that their children adhered to the tenets of their religion. Unlike her younger sister Francis, with whom she remained quite close, Lillian maintained her Methodist faith. When Lillian was two, the family moved to Streetsville, Ontario. There, at the age of five, Lillian became seriously ill. She was left with a tubercular hip, which would make walking difficult for the rest of her life.

Like many farm families in the East, the Beynons moved west seeking a brighter future. In 1889, they settled on a farm near Hartney, Manitoba. The school in Hartney was too far for Lillian to walk, given her hip, so her family arranged for her to move back east where she attended Harbord Collegiate Institute in Toronto. She returned to Manitoba in 1895. After obtaining a teaching certificate in 1896, she began to teach in rural schools. It was through teaching that she became familiar with the difficulties that Prairie farm women suffered.

In 1902, the Beynons moved to Winnipeg. In 1905, Lillian graduated with a BA from the University of Manitoba. This was a great achievement, as women university graduates were rare in Canada during the early decades of the 20th century.

In 1906, John Dafoe, editor of the Manitoba Free Press, was travelling through the southern Manitoba town of Morden, where Lillian Beynon was teaching. With ambitions to be a writer, she boldly asked Dafoe for a job. He hired her as an assistant editor of the Weekly Free Press and Prairie Farmer, offering her a “woman’s page.” Until the late 20th century, Canadian newspaperwomen were almost always hired to write on women’s issues. (There were some notable exceptions, including Mary Ann Shadd, editor of The Provincial Freeman, mainly published in Chatham, Ontario, and E. Cora Hind, agricultural reporter for the Manitoba Free Press).

Beynon called her column “Home Loving Hearts” and edited and wrote under the name Lillian Laurie. Readers were encouraged to write letters to the editor and many Prairie farm wives wrote about their loneliness and about their political grievances. Most of the writers supported women’s suffrage and, in addition, wanted the law to recognize their right to inherit (dower rights) and to homestead. The letters she received increased Beynon’s knowledge of and sympathy with Prairie farm women and encouraged her support for women’s suffrage and other changes to the legal status of women.

Beynon’s women’s page included recipes, articles about fashion and various homemaking hints, but it also featured stories about the women’s movement. Beynon’s interest in women’s rights was wide ranging. On 17 September 1910 she wrote, for example, about Muslim women in India: “Beyond shadow of a doubt in emancipating women, Islam is laying the foundation upon which to build a superstructure of progress.”

In September 1911, Lillian Beynon married fellow newspaper writer Alfred Vernon Thomas (1875–1950). It was Thomas, a feminist and pacifist, who encouraged Lillian to become one of the founders of the Manitoba Political Equality League in 1912. A highlight of the League’s work was a satirical play, A Women’s Parliament, staged at the Walker Theatre in Winnipeg on 28 January 1914. The play was set in a world in which women ruled, and men were asking for the vote. Nellie McClung, Manitoba’s most famous suffragist, played the leading role, but it was Lillian Beynon Thomas who brought the idea to the group.

The sociable, tactful and warm-hearted Beynon Thomas had a talent for bringing people together. In 1908, she was instrumental in starting a short-lived literary club called The Quill and she was active in the Canadian Women’s Press Club. But her work with the Political Equality League, which fought for and won women the right to vote in Manitoba in 1916, was her most significant contribution to Manitoba politics (see Women’s Suffrage in Manitoba).

When the First World War broke out in 1914, most English Canadians supported the effort, and supported conscription as well. A.V. Thomas did not and was fired from his job at the Manitoba Free Press as a result. Lillian and Alfred left Winnipeg for Brooklyn, New York, in 1917. Lillian worked for a charity for sailors run by the Episcopalian church. She went to the theatre in her spare time, and took writing courses at Columbia University.

Lillian and A.V. Thomas returned to Winnipeg in 1922. Thomas was hired by the Winnipeg Tribune, where he remained until his retirement in 1944. Lillian devoted herself to writing short stories and plays, including Jim Barber’s Spite Fence (1935), winner of the Dominion Drama Award for Manitoba. She published her first novel, New Secret, in 1946.

Lillian Beynon Thomas died on 2 September 1961. Her obituary in the Winnipeg Free Press mentioned that she was still active at age 86 and that “a week before she died she was delving into the technique of the T.V. play.”