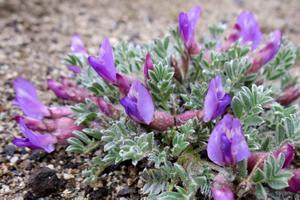 Locoweed is the common name for plants of the genera Astragalus and Oxytropis in the pea family, Leguminosae or Fabaceae (see Legume). Species of Astragalus are also commonly known as milk vetch. Locoweeds are notorious for causing livestock poisoning. "Loco," Spanish for "crazy," refers to peculiar movements of poisoned (intoxicated) horses.

Both genera are morphologically similar, with pealike flowers and compound leaves with numerous leaflets. Oxytropis flowers have lower "keel" petals prolonged to points (short-beaked), and the plants are stemless or nearly so. Astragalus species have blunt keels (not beaked) and the stems are evident. Both produce flowers in spikes; plant height and flower colour vary with the species.

Approximately 2000 to 3000 Astragalus and about 300 Oxytropis species are found in cool, arid and Mediterranean-like regions of the northern and southern hemispheres. There are about 40 species of Astragalus and 15 species of Oxytropis in Canada. The most important Canadian plains species are Oxytropis lambertii (distributed in southern Manitoba and Saskatchewan), O. campestris, (British Columbia to Manitoba) and O. sericea (Yukon to Manitoba). Poisonous Astragalus species in Canada include A. bisulcatus, A. racemosus and A. pectinatus.

There are 2 major modes of poisoning in locoweeds. Some poisonous Astragalus species accumulate the metal selenium from the soil, making the plant tissue toxic when consumed. Some Oxytropis and other Astragalus species synthesize a compound (swainsonine), which causes symptoms of intoxication - and sometimes ultimately death - when eaten. In Canada most poisonings occur among cattle.