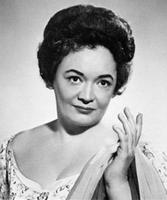 Lois Catherine Marshall, soprano (b at Toronto 29 Jan 1925; d there 17 Feb 1997). One of seven children in a large, music-loving family, Marshall from childhood was surrounded by singing siblings. An early memory had her giving her first "public" request performances from a hospital bed for doctors and nurses, while she was convalescing from polio contracted at the age of two. After some years of painful recuperation (the disease was to leave her with a life-long walking disability), she began voice studies at age 12 with Weldon Kilburn (at the Royal Conservatory of Music in Toronto), her accompanist and coach until 1971 and to whom she was eventually married in 1968.

During her late teenage years as a stenographer at the T. Eaton Company, Marshall made an unofficial debut as Princess Ida in the Gilbert and Sullivan operetta mounted by that firm's opera society. Foregoing secretarial work, she formally attended the Royal Conservatory and, on completing her studies there in 1950, received the Eaton Graduating Scholarship for the outstanding graduate of the Conservatory's Senior School. That same year, she won top award in the radio contest Singing Stars of Tomorrow, appeared with the National Symphony Orchestra in Washington, DC, while the city celebrated its sesquicentennial, and sang at the Bach (bicentennial) Festival in Toronto. She was already known, however, to Ernest MacMillan, who in 1947 when she was studying lieder with Emmy Heim, had sought her soprano voice - "radiant even then" he later recalled - for the solos in the annual performance of Bach's St Matthew Passion in Massey Hall. It was a part she was subsequently engaged by him to sing on many occasions, including the 1954 visit to New York by the Toronto Mendelssohn Choir and the Toronto Symphony Orchestra, and the 1953 recording of the oratorio. During the 1950s, she also sang under MacMillan in Bach's Mass in B Minor, Verdi's Requiem and Handel's Messiah.

Winning in 1952 the coveted Naumberg Award and making, the same year, her New York Town Hall debut, brought Marshall to the notice of Arturo Toscanini, with whom she performed in the NBC Symphony Orchestra's Missa Solemnis of Beethoven and in their 1953 landmark recording of that work. Then followed her glory years, working with such conductors as Sir Thomas Beecham, George Szell, Sir Ernest MacMillan, Otto Klemperer, Wilfrid Pelletier, Leopold Stokowski, Kyril Kondrashin, Eugen Jochum, Karel Ancerl and Andrew Davis. In solo recitals, orchestral performances, concerts, broadcasts and recordings, both at home and abroad, she sang with the world's leading orchestras in Britain, Germany, the Netherlands, Australia, New Zealand, the US, Canada - and the USSR, to which she made in 1958 the first of some eight tours, at that time a record for a western artist.

Not only was her dexterous, lyric soprano voice a superb natural instrument capable of power, warmth, flexibility, range and a renowned beauty of tone, Marshall herself sang with a strong emotional commitment. Her unusual ability to transform notes into pure emotion and to convey their heartfelt interior meaning resulted partly from the intense preparatory study she gave to a work. But it also arose from her personal sincerity and innate musicality which, born of a private strength of character, unlocked for millions the beauty of intent lying at the core of vocal music, be it an intimate Scottish folk song or a towering Bach aria. Canadian contralto Maureen FORRESTER commented that Marshall's singing could "make an audience dissolve." Marshall's interpretive acuity and communicative skill could, in fact, evoke profound response: choral conductor and CBC program host Howard Dyck recalled that his first hearing her, in 1962, perform her Messiah solos "inspired me and confirmed my decision to pursue a career in music."

Success followed success. Following her premiering, in 1953, Godfrey Ridout's Cantiones mysticae No. 1 at Carnegie Hall, Marshall appeared with many US orchestras in Chicago, Boston, Cleveland, Philadelphia, New York and elsewhere and, in 1956 - the year of her London debut - she sang Mozart's Exsultate, jubilate with the Royal Philharmonic Orchestra under Thomas Beecham, afterwards recording Handel's Solomon and Mozart's Abduction from the Seraglio. She gave recitals in 1957 at the Edinburgh Festival and at Royal Festival Hall and, in 1960, made a world tour. Already known internationally, she was acclaimed one of the leading artists of the day. In Canada, she appeared many times over her career at the Vancouver International Festival, at the Guelph Spring Festival, with the York Concert Society, at the Stratford Festival, and with the Mendelssohn Choir in Toronto for concerts, broadcasts and recordings. She sang Hindemith's Das Marienleben, with her great admirer Glenn Gould at the piano, at Stratford in 1962; Strauss's Four Last Songs at Expo 67; Handel's Solomon in Toronto in 1972; and Somers's Limericks in Toronto in 1980. She sang, or sang in, the premieres of a number of Canadian compositions, such as Brott's Songs of Contemplation (1945), Beckwith's Four Songs to Poems by e. e. cummings (1950), Ridout's Esther (1952), Freedman's Anerca (1966), Morawetz's From the Diary of Anne Frank (1970) and Johnston's The Irish Book (1972). As a member for 15 years of the New York-based Bach Aria Group, Marshall toured extensively and, with Maureen Forrester, gave a number of joint recitals in the 1970s.

Primarily a recitalist and oratorio soloist - polio had precluded an active stage career in opera - Marshall nonetheless performed a variety of operatic roles in concert and, on a few occasions, acted in operas where choreography was favourable or, indeed, customized for her. Her staged operatic roles included the Queen of the Night (The Magic Flute), Ellen Orford (Peter Grimes) and, while she toured the US with the Boston Opera under Sarah Caldwell, Mimi (La Bohème) and Tosca. Her extensive discography, of course, includes a variety of operatic arias.

In 1968, Marshall was invested as a Companion of the Order of Canada but was, over her long career, the recipient of many other honours and awards, such as the University of Alberta National Award in Music (1962), the Centennial Medal (1967), a Canada Music Council Medal (1972), the Ontario Arts Council Medal of Excellence (1973), the Molson Prize (1980), the Toronto Arts Award for music (1987) and the Order of Ontario (1993). She held honorary degrees from the Universities of Toronto and Regina, and the Royal Conservatory made her an honorary fellow in 1994. In the mid-1970s, after more than 30 years as a world-class soprano, she made the vocal transition to the mezzo-soprano range, which permitted her to revisit in performance the French operatic mezzo repertoire and, particularly, a body of German lieder in their original keys. This notable vocal adaptation led to a number of memorable recitals in the late 1980s - despite her having given her official farewell tour in 1981-82, concluding in a Roy Thomson Hall benefit concert - with leading accompanists such as William Aide, Anton Kuerti and Greta Kraus. In Toronto, she sang for the Royal Conservatory's centennial concert in 1987 and performed in Schoenberg's Pierrot Lunaire in 1989. Named adjunct professor in music at the University of Toronto in 1986 (having completed duties as artistic director of Edmonton's TriBach Festival in 1985), she gave further masterclasses at the 1990 Scotia Festival of Music where she also performed the role of narrator in Walton's Facade. By 1996, she was still teaching at the University of Toronto two days each week, where her mentoring wisdom continued to stir young Canadian singers.

Marshall's death in 1997 at the age of 73 occasioned mourning across the world's musical community and numerous tributes from those who, over her luminous 40-year career, had been touched by her radiance and her passion. Later that same year, family, colleagues and friends established the Lois Marshall Memorial Scholarships at the University of Toronto's Faculty of Music, "in loving memory of a consummate artist and an inspiring teacher."

In 1947, Ernest MacMillan had spoken of her "radiant" voice in Bach arias. Forty years later, fondly remembering her performance of Schubert lieder at the Conservatory's 1987 gala, Opera Canada had reported that her impact was "so overwhelming that it brought tears to many eyes." Marshall's personal archives have been deposited at the National Library of Canada.