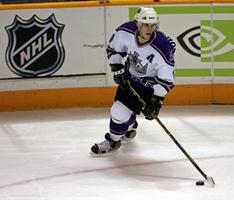 Luc Robitaille, HOCKEY player (b at Montréal, 17 Feb 1966). Luc Robitaille was a prolific goal scorer during his 19 seasons in the NATIONAL HOCKEY LEAGUE (NHL) from 1986 to 2005. During his career he scored 688 goals, placing him 10th on the NHL's all-time goal-scoring list. Robitaille's 1394 total points rank 20th in league history, making him the highest-scoring left-winger in NHL history.

Robitaille was not originally thought to be all-star NHL material. He was the 171st pick of the 1984 NHL entry draft, selected in the 9th round by the Los Angeles Kings. Robitaille's skills and point production improved after he was drafted, however, and in his final 2 years of junior hockey with the Hull Olympiques of the Quebec Major Junior Hockey League (QMJHL), Robitaille recorded seasons of 149 and 191 points. In 1986 he was named the Canadian Hockey League's (CHL) player of the year. That year, he also competed for Canada's silver medal- winning world junior team.

Robitaille's rookie season with the Kings was one to remember. He scored 45 goals and 84 points on his way to winning the CALDER TROPHY (rookie of the year) for the 1986-87 season. His best NHL season was 1992-93, when Robitaille scored 63 goals and 125 points, both of which were league records for left-wingers.

Robitaille earned a special place in Canadian hockey history when he scored the winning goal in a shootout to give Canada its first gold medal in 33 years at the International Ice Hockey Federation (IIHF) world championships in Milan, Italy, in 1994. He admitted later to being nervous before taking his shot, but said that he would never forget the moment. He still has the equipment bag he used during that tournament. He also played for the 1991 Canada Cup team.

After the 1993-94 NHL season, Robitaille was traded to the Pittsburgh Penguins, where he spent one season. Following his stint with the Penguins he played 2 seasons with the New York Rangers, where he was re-united with former Los Angeles teammate Wayne GRETZKY for the 1996-97 season. From 1997 to 2001 Robitaille again played for the Kings before signing as a free agent with the Detroit Red Wings for the 2001-02 season. Robitaille won his only STANLEY CUP championship with the Red Wings that season.

Robitaille joined the Kings for a third time for the 2003-04 season and retired from NHL play after the 2005-06 season after scoring just 24 points in 65 games. During 19 seasons in the NHL, Robitaille scored 30 or more goals 12 times. He is the Kings' all-time leading goal scorer with 557. Robitaille, whose #20 was retired by the Los Angeles Kings, was inducted into the HOCKEY HALL OF FAME in 2009.