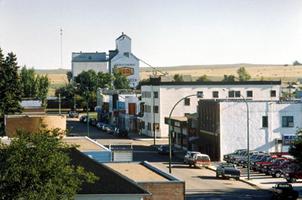 The Cypress Hills area was of great significance for Indigenous peoples, providing both game and supplies of lodgepole pine. In 1875 the North-West Mounted Police (NWMP) established Fort Walsh near the Cypress Hills in response to an attack on local Assiniboine by American wolf hunters in 1873. In 1882 construction workers of the Canadian Pacific Railway main line wintered at the present site of Maple Creek. When Fort Walsh was shut down the following year, a barracks of the NWMP was set up here, most of the fort's peripheral population followed the police, and a village was founded. The creek, and subsequently the village, was named for the Manitoba maples along its banks. Ranching quickly became the mainstay of the local economy, and by 1903 the population had grown enough for Maple Creek to incorporate as a town serving the local ranch population.

The rural municipality remains one of Saskatchewan's most important ranching areas. There is also some grain farming and natural gas exploration and development in the area. The town serves as a gateway to Cypress Hills Interprovincial Park, an important tourist attraction. The area's western heritage is displayed in two museums and celebrated with several rodeos that are held each year.