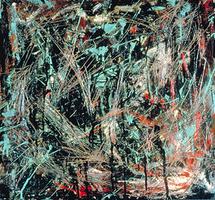 Marcel Barbeau, painter, sculptor, filmmaker (born 18 February 1925 in Montréal, QC; died 2 January 2016 in Montréal). One of the original signatories of Refus global, Barbeau was an active member of the Automatistes led by Paul-Émile Borduas. His early training was thorough. As well as studying drawing at the École du meuble, Montréal, he worked with Borduas, with architect Marcel Parizeau and art historian Maurice Gagnon. He travelled extensively, living and exhibiting in Paris, New York and California, and his style changed, moving from the lyrical abstracts of the Automatiste period towards a more geometric mode.

In the late 1970s he returned to the free-form, all-over surface activity that he had favoured before. By 1987, inspired by his sculpture and collages, his painting again changed, moving back to hard edge forms in highly contrasted colours. From 1958 to 1974 and 1991 to 1996, he lived and worked in the United States and in Europe, meeting artists such as the American abstract-expressionists and members of the Pop Art movement, as well as members of the French kinetic movement, GRAV (Groupe de recherche d'art visuel). During his time living in France in the early seventies he began making large-scale sculpture as well as experimenting with performance art.

Marcel Barbeau's art has been shown extensively throughout Canada, the United States and Europe, including a retrospective exhibition at the Winnipeg Art Gallery in 1969. An exhibition of his post-Automatiste work from the late 1950s and early 1960s was mounted in Paris in 1971, contributing substantially to his stature as a major artist and establishing his international reputation. He has won many awards, including the 1964 Royal Canadian Academy Zack Award, the 1994 Gold Medal in painting at the Jeux de la Francophonie in Paris and the Governor-General's Award in Visual and Media Arts in 2013. Barbeau is represented in major collections, including those of the Art Gallery of Ontario, the British Museum (London), the National Gallery of Canada, the Montreal Museum of Fine Arts, the Musée d'art contemporain de Montréal, Musée du Québec, and the Stedelijk Museum (Amsterdam).