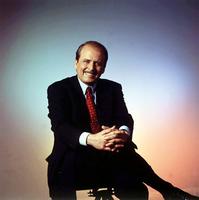 Mark Starowicz, journalist, radio and TV producer (b at Worksop, Eng 8 Sept 1946). The son of Polish émigrés, Mark Starowicz lived in England and Argentina before coming to Montréal at age 7. He was educated at McGill University where he edited the McGill Daily, and he worked for the Montreal Gazette. He covered Québec politics for the Toronto Star and co-founded and wrote for The Last Post magazine.

In 1969 he moved to Toronto. There he joined CBC Radio and during the 1970s produced five programs including "Radio Free Friday," "Five Nights" and "Commentary." Most importantly, he was assigned to improve CBC's flagship news magazine"As It Happens" (1973-76) and he created the popular 3-hour "Sunday Morning" current-affairs show, serving as its executive producer (1976-80) and winning a number of ACTRA awards.

In 1979, CBC new programming boss, Peter Herrndorf, appointed Mark Starowicz to chair a task force to reform CBC TV news and current affairs. The result was to move The National news broadcast to 10 pm, considered a risky move at the time. In addition Mark Starowicz was made executive producer of The Journal, a current affairs and documentary program to follow The National. He made use of his radio experience, and hired the popular "As It Happens" host, Barbara FRUM, to host The Journal. It was an immediate success and achieved an average 1.6-million viewers in its first year, a record for a CBC current affairs program. "As It Happens," "Sunday Morning" and The Journal are considered by critics and industry insiders to be the most influential and innovative news programs in Canada since 1970. In 1985 he was Atkinson Lecturer at Ryerson University.

Following the cancellation of The Journal in 1992, Mark Starowicz became the executive producer for documentary production at the CBC. In this role, he launched the prime-time documentary series Witness, a weekly documentary program that won a GEMINI Award for best documentary series, and Life & Times, a biography series. He oversaw the programs The Third Angel (1991) and Red Capitalism (1993), which won numerous international awards, as well as The Dawn of the Eye (1996), the 32-hour miniseries Canada: A People's History (2000), the 10-part Hockey: A People's History (2006), and China Rises (2006). In 2004, he was the creator and executive producer on the series The Greatest Canadian.

Mark Starowicz won a Gemini Award for best documentary series for A People's History in 2001, was nominated for City of Ruins: The Halifax Explosion in 2004, and won again in 2006 for China Rises. He was made an officer of the ORDER OF CANADA in 2004 and a member of the ORDER OF ONTARIO in 2006. He was named the Canadian Club's Canadian of the Year in 2000, and was also the recipient of the Canadian Journalism Foundation's Lifetime Achievement Award for his contribution to the industry. He lectures and speaks widely on the impact of television and public policy upon the way we see the world.