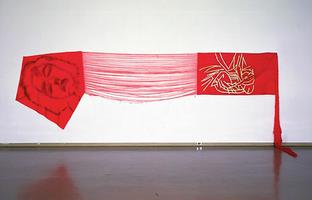 Mary Elizabeth Scott, artist (b at Calgary, AB 19 Dec 1948). Well-known for her work as an artist, she has also played an important role as a teacher, administrator and gallery director. She is a graduate of the University of Calgary (Bachelor of Fine Arts with Distinction, 1978) and the NOVA SCOTIA COLLEGE OF ART AND DESIGN (Master of Fine Arts, 1980). She worked as summer program coordinator, Studio Division (1980), and as an instructor at the Nova Scotia College of Art and Design (1980-81). At the BANFF CENTRE she was the summer program coordinator (1981), assistant head of the Art Studio (1982-84) and head of the Fibre Department for the summer session (1988). She is an instructor of painting and drawing at the Alberta College of Art and Design, Calgary (1984-present). Her support for artists has also taken form in her work as one of the founders and co-directors of Stride Gallery, Calgary (1985-86), and director of dL Gallery, Calgary (1988-89).

Since 1979, she has exhibited widely in Canada in group and solo exhibitions, many with published catalogues, such as She Writes in white ink, Walter Phillips Gallery, Banff (1985); Mary Scott, Paintings 1978-1985, organized and toured by the Dunlop Art Gallery, Regina (1986); Songs of Experience, The National Gallery of Canada (1986); Mary Scott, organized and toured by the Southern Alberta Art Gallery (1989); The Embodied Viewer, Glenbow Museum (1991); and Mary Scott, Edmonton Art Gallery (1993). Her work is in major public collections such as the Canada Council Art Bank, Glenbow Museum, Mendel Art Gallery, The National Gallery of Canada, Nickle Arts Museum, University of Lethbridge and Vancouver Art Gallery.

Mary Scott takes a feminist approach, questioning what it is to make art and linking her work to readings in literature and theory, incorporating text and layers of meaning. She often uses labour intensive techniques such as building up painted surfaces with a syringe, shredding and removing the weave of fabric, using embroidery and gold leaf, wrapping and crochet.