Mary Matilda Riter was born on 7 September in either 1867 or 1868 in Teeswater, Ontario. She was the youngest of five children. In the early 1880s, her family moved to a homestead in Clearwater, Manitoba.

Hamilton was fond of drawing from a young age. As a teenager, she trained as a hatmaker in Emerson, Manitoba. When her boss moved to Port Arthur, Ontario (now Thunder Bay), Hamilton followed. There she met Charles Hamilton and the couple married in July 1889. Charles was a dry goods merchant, and Mary co-owned the Paris Dry Goods House with him.

In 1892, Mary gave birth to a stillborn infant, and Charles died the following year. Before her husband died, Hamilton studied art in Toronto. In 1894, she moved to Winnipeg to pursue art further. She opened a china-painting studio, where she taught and produced works to support herself.

Mary Riter Hamilton’s art teachers in Toronto encouraged her to travel to Europe to continue her studies. She left to study art in Berlin in August 1901. In 1903, Hamilton moved to Paris to continue her studies. A major career boost came in 1905, when Hamilton was exhibited in the Salon in Paris, one of the largest annual art exhibitions, and when one of her paintings was reproduced on the cover of a French magazine. In 1906, she returned to Winnipeg to see family and exhibit works. She returned to Paris the following year to continue practising art. 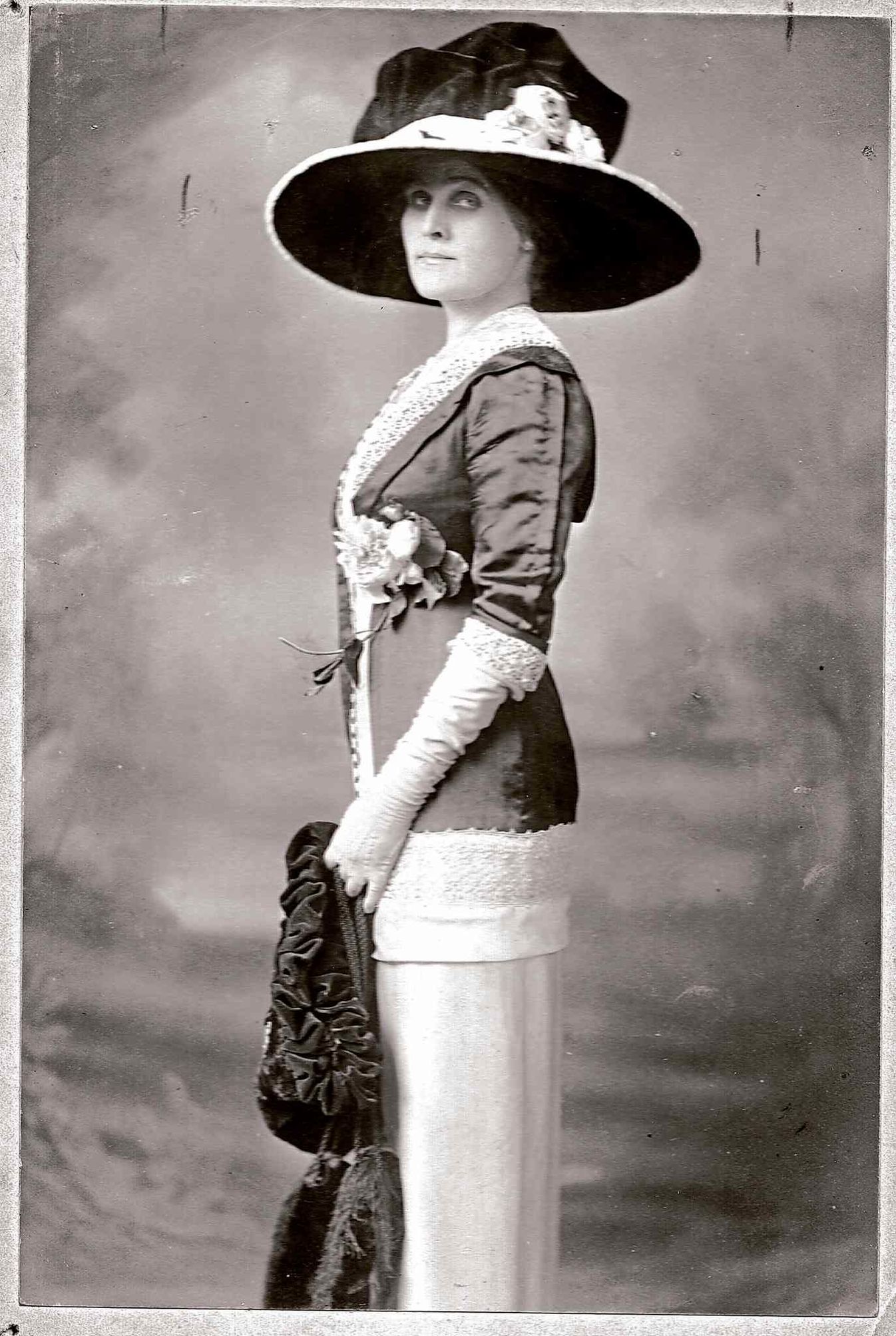 Mary Riter Hamilton returned to Canada in 1911 to care for her sick mother. She exhibited works in Toronto, Montreal and Ottawa. She returned to Winnipeg, but moved to Victoria, British Columbia, in 1912 and continued teaching and producing art. Hamilton put on exhibits in Western Canada and reports from this time refer to Hamilton as a well-known, celebrated, and distinguished artist. Her works were purchased by Princess Patricia and Prime Minister  Sir Robert Borden.

Mary Riter Hamilton was living in Victoria when the First World War broke out and had been planning to return to Paris. Hamilton had to stay in Canada and ran a portrait studio in Victoria. During the war, she petitioned the Canadian War Memorials Fund to send her to the front lines as a war artist, but was denied (see Art and the Great War). Only men received commissions for the battlefront, whereas female artists were relegated to the Canadian home front (see Representing the Home Front: the Women of the Canadian War Memorials Fund).

Hamilton got her chance to visit the battlefields after the war ended in 1918. She received a commission from the Amputation Club of British Columbia (now The War Amps) to paint battlefield landscapes for their veteran’s magazine, The Gold Stripe. This commission sought to record the aftermath of the war and to commemorate those lost. Hamilton departed for Europe quickly to depict the ruined state of battlefields, cemeteries and towns before reconstruction began, leaving in March 1919.


Hamilton arrived in France, staying at first with Canadian military but later embarking on her own. Hamilton travelled through France and Belgium visiting the sites of major Canadian battles, such as the Somme, Vimy Ridge and Ypres. She faced harsh conditions, living in inadequate shelters, often with little to eat. The landscapes she painted were littered with unexploded land mines and shells. In a 1922 interview, Hamilton explained why she worked in these conditions: “I made up my mind that where our men went under so much more dreadful conditions I could go, and I am very proud to have been able even in a small way to commemorate the deeds of my countrymen.” 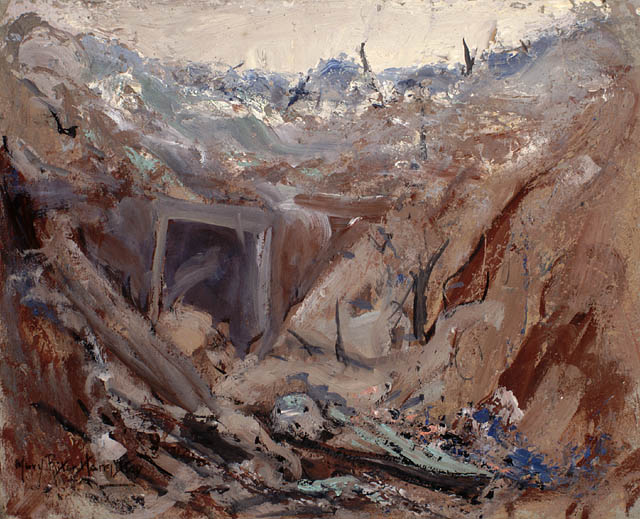 Hamilton painted on site, setting up her easel on the battlefields. When she ran out of canvases, she used whatever materials could be found to paint on. Her supplies needed to be portable as she often had to walk long distances. Between 1919 and 1922, Hamilton created some 350 works from the warfront, the largest collection of Canadian First World War paintings by a single artist. The works displayed themes of destruction and renewal and were painted in an impressionist style, favouring colour and form over detail. 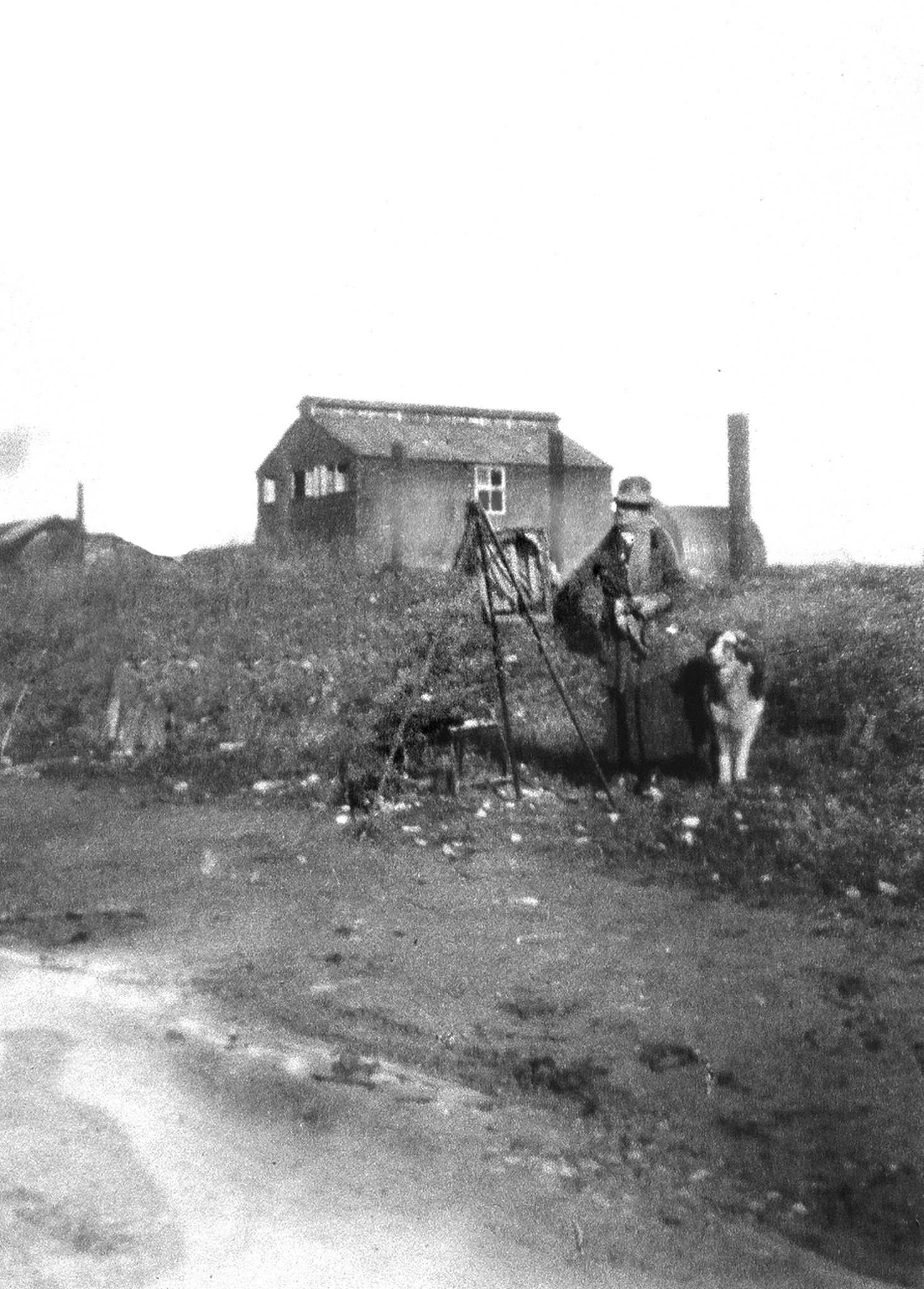 Mary Riter Hamilton on the battlefields with her easel and dog, Old Bob. An army hut stands in the background. Photo taken circa 1920.

Hamilton’s battlefield paintings first appeared in The Gold Stripe in 1919, and in exhibitions in British Columbia. Her works were later exhibited in France, including at the Paris Opera House and at the Salon. Her paintings received high acclaim in Europe. In 1922, she was awarded the purple ribbon of the Order of the Academic Palms from France in recognition of her work and was commended for her bravery in depicting the devastation of the battlefields. 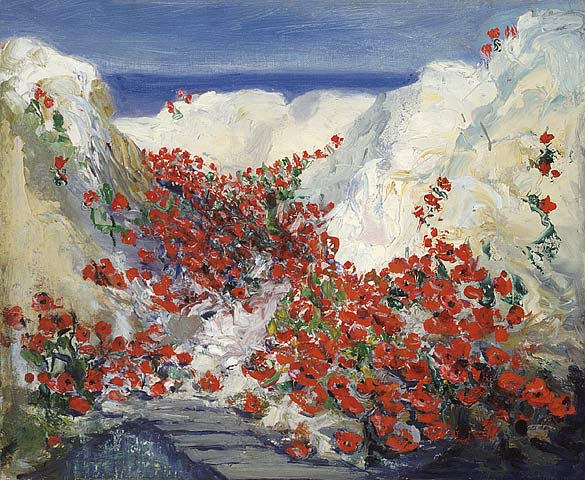 Hamilton’s health suffered during the three years she spent living in poor conditions and painting the destruction. In the years following, Hamilton was hospitalized in France and the United Kingdom. Her financial situation was increasingly dire, Hamilton sold her pre-war paintings for low prices to pay rent and painted silk scarves in Paris to earn money for her return to Canada. Hamilton won a gold medal from the International Decorative Arts Exhibition in Paris in 1925 for one of her scarves.

Mary Riter Hamilton returned to Canada in 1925, where she promoted her battlefield collection. Although Hamilton’s paintings had been successful in Europe, they did not receive the same reception in Canada. This was likely because Canadians were moving on from the war by this time, and perhaps because her European painting style contrasted with the Canadian national style popular in this period (see Group of Seven). Hamilton gifted some of the paintings to war veterans, but refused to sell the rest. She donated her war paintings to the National Archives of Canada (now part of Library and Archives Canada).

Hamilton moved to Winnipeg in 1926, before settling in Vancouver to teach and exhibit. Her battlefield painting project had taken a toll on her health. From 1928 until her death, Hamilton was in and out of hospitals and psychiatric institutions. By 1948, Hamilton had lost her sight and was living in poverty.

Hamilton died on 5 April 1954 in the Essendale psychiatric hospital in Coquitlam and was buried alongside her husband in Port Arthur.

Mary Riter Hamilton painted some 350 works from the war front, the largest collection of Canadian First World War paintings by a single artist. After her death, Hamilton’s works continued to be exhibited both nationally and internationally.

In 1988, The War Amps released a short documentary on Hamilton titled No Man’s Land. In 2018, to mark the 100th anniversary of The War Amps — which commissioned Hamilton to paint battlefront scenes following the war — the Canadian War Museum launched Resilience – The Battlefield Art of Mary Riter Hamilton, 1919–1922. The temporary exhibition featured 15 of Hamilton’s paintings from the collection of Library and Archives Canada. In 2020, Canada Post issued a stamp in honour of Remembrance Day; the stamp featured Hamilton’s painting Trenches on the Somme (1919). 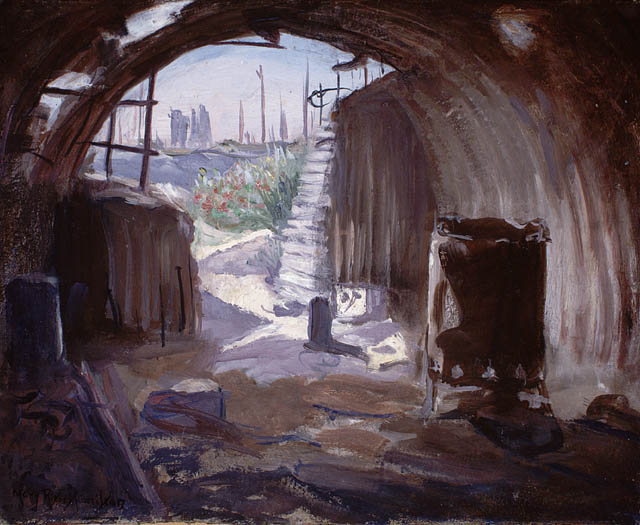 Mary Riter Hamilton, oil on board.
×
Suggest an Edit