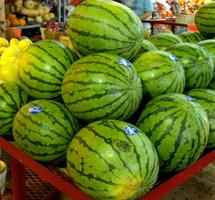 Even though it is not in the genus Cucumis, the watermelon (Citrullus vulgaris) is loosely considered a melon. Its juicy flesh is usually pink, but it can also be red, orange or yellow (courtesy Isis Gagnon-Grenier).

The melon (Cucumis melo), is an annual, viny plant of the Cucurbitaceae family. The most important cultivated groups are cantaloupe, muskmelon, winter melon and sugar melon. Watermelon (Citrullus vulgaris) belongs to a different genus of the same family.

Melons originated in Asia and were found by Christopher Columbus on Isabella Island in 1494. Cantaloupe is grown mainly in Europe. What are known as cantaloupes in North America are muskmelons; they have a pleasant flavour and aroma and can be served as an entrée or dessert. Winter melons ripen late and lack the scent and rough rind of the muskmelon. Melons need warm temperatures and a frost-free growing season of at least 120-140 days; these factors limit their cultivation in Canada to southern Ontario, the Okanagan Valley of British Columbia, southern Alberta, southern Manitoba, and drier parts of the Annapolis Valley, Nova Scotia. A hardy variety of muskmelon, Far North, was introduced by Ukrainian settlers in the southern prairies. To hasten their development, muskmelons may be grown in greenhouses or under cover in the field. Irrigation is important during dry spells, especially in the period up to formation of the melon. Melons are susceptible to wilt diseases and mildew, and to cucumber beetles and aphids. 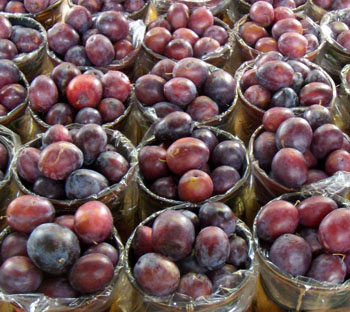 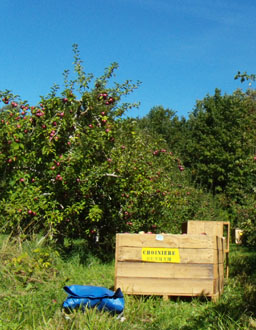