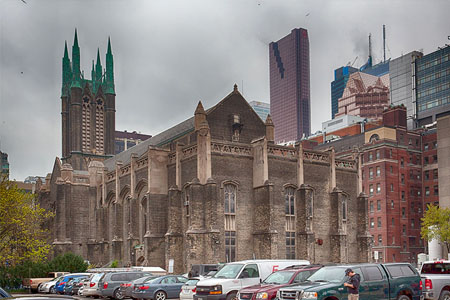 An exterior view of the Metropolitan Methodist Church, circa 2012. The spire and apse are much changed after the fire in 1928 (photo \u00a9 2012 by James Marsh). 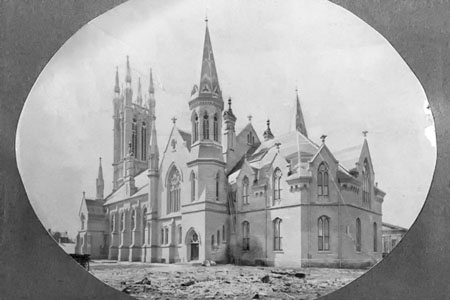 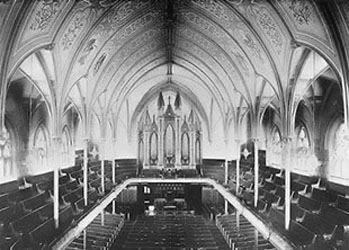 A view of the original interior of Metropolitan Methodist Church, 1890s, in its more traditional communal arrangement (public domain).
PreviousNext

Metropolitan Methodist Church, now called Metropolitan United Church, is located at 56 Queen Street East, Toronto. From the 1870s through the 1890s Toronto was proud to call itself a "city of churches." This piety spurred Victorians to build bigger and more impressive churches than their competing denominations. The history of the Wesleyan Methodist congregation dates back to 1818 when it built a modest church in downtown Toronto. This building was replaced in 1831 and again in 1833 with a Georgian-style building that could accommodate 1000 people. As the congregation continued to grow it moved to its present location on Queen Street.

The Rev. Egerton Ryerson laid the cornerstone of the ambitious new church in 1870 and it was dedicated in 1872. Early Methodist churches were more modest, often in the Classical or Romanesque revival styles, in contrast to the churches of the Anglicans and Roman Catholics, which were usually Gothic Revival. But the new Metropolitan was to be the greatest of these churches, noble and stately, surpassing both the nearby St. James Anglican Cathedral and St. Michael's Roman Catholic Cathedral.

While architect Henry Langley's design resembled a High Victorian Gothic cathedral from the outside, inside it consisted of a rectangular auditorium with galleries around three sides, with no sign of an alter. Methodists had no use for the liturgical forms of Anglicans or Roman Catholics. Langley's church, with seating for over 1900 people, was often referred to as the "Cathedral of Methodism." The inaugural service of the Methodist Church of Canada was held here 16 September 1874. The church hosted the World Ecumenical Methodist Conference meetings in 1911 and the first General Council of the United Church in 1925, at which the United Church of Canada was formed by the union of Methodist and Congregational congregations plus two-thirds of the Presbyterian Churches in Canada. From this time the church would be known as Metropolitan United Church.

The first Carillon installed in Canada, a 23-bell set commissioned from Gillett & Johnston by Chester D. Massey in memory of his wife, was placed in Metropolitan United Church, Toronto, in 1922. The carillon was, at the time of its installation in 1922, the first harmonically tuned carillon in North America. It was enlarged in 1960 and 1971 to a total of 54 bells.

The church also contained an organ that was rebuilt and enlarged into a three-manual instrument with 3315 pipes in 1876, making it the largest organ in Canada at the time. In 1904, the Karn Company built a new instrument given by Lillian Massey Treble in memory of her father, Hart Massey. In 1911, this organ was enlarged to 86 stops, 93 ranks, once again giving the church the distinction of having the largest organ in Canada.

Twelve hours after the evening service of 30 January 1928 - at which a sermon was preached on the text "the God that answereth by fire, let him be God" - the church caught fire and was gutted. The tower with its 23 bells, the narthex, the rear portion of the balcony and the brick walls were all that could be saved.

The new church, designed by J. Gibb Morton and opened in December 1929, retained the front wall and tower, but inside the architect laid out a more cathedral-like plan with nave, aisles and transepts. There were vociferous objections that the new plan was a denial of the nonconformist ideology of Methodism.After the fire, the congregation contracted with Casavant Frères to build a five manual organ of 96 stops that was first used on Easter Sunday, 20 April 1930. Once again the church could claim having the largest organ in Canada.