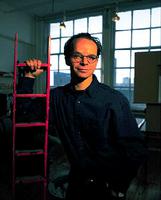 Michael Levine, scenographer (b at Toronto 5 November 1961). Michael Levine completed a foundational year at the Ontario College of Art in 1979 and obtained a degree in theatre design at Central St Martin's College of Art and Design in London, England, in 1981. He works in North America and Europe, designing sets and costumes for opera, theatre, film and dance productions.

In 1984 Levine was a resident designer at the Glasgow Citizen's Theatre, Scotland, where his imaginative costume and set designs first attracted attention for their postmodern evocation of visual styles from the past. Levine subsequently designed Uncle Vanya (TARRAGON THEATRE, 1985), Spring Awakening (CentreStage, 1986) and five productions at the SHAW FESTIVAL (1984-87). At the Shaw Festival his towering closet of red dresses mirroring the costumes for The Women, the monochromatic cream-coloured set that grew in front of the spectators for Heartbreak House (1985) and the multi-layered set for Arms and the Man (1986) were huge metaphorical designs that redefined perspective and performance space. Levine's scenography often integrates elements that have their own life on the stage, such as water in Tectonic Plates (Harbourfront, Toronto, 1988), mud in A Midsummer Night's Dream (National Theatre, England, 1992), paper in La Bohème (Antwerp, Belgium, 1994), and leaves in Eugene Onegin (Metropolitan Opera, USA, 1997).

Michael Levine's designs for opera frequently draw on the chorus as a constitutive component of the stage, as when chorus members became bodies heaped under Oedipus's throne in Oedipus Rex (CANADIAN OPERA COMPANY, 1998) or when the chorus became the human counterpart to the architectonics of the hydraulic platform in Rigoletto (Netherlands Opera, 1996). For Mephistofele (San Francisco, Lyric Opera of Chicago and Geneva Opera, 1988) he extended his design beyond the proscenium arch with figures suspended in the auditorium. For the internationally acclaimed double bill Bluebeard's Castle and Erwartung (Canadian Opera Company, 1993) he characterized the stage as an enormous black box. In Bluebeard he defined the architecture primarily through lighting, while for Erwartung he used slide projections on the stage and downstage scrim to create a collision in perspective. In Mario and the Magician (Canadian Opera Company, 1992) the entire theatre was drawn into the set by the chorus to evoke the increasingly regimented society of pre-fascist Italy. Based on a previous design for the Lyric Opera of Chicago, Levine created a sumptuous Victorian men's club complete with wingback chairs, enormous Persian rugs and gothic fireplaces for Rigoletto (Canadian Opera Company, 2011).

In designs for Nabucco (Paris Opera - Bastille, 1995), the acclaimed production of Die Dame Ohne Schaten (Vienna State Opera, 1998) and the award-winning Midsummer Night's Dream (Le Festival d'Aix en Provence and English National Opera, 1991), Levine made stunning use of new technologies. For Nabucco, monumental walls extending the height and width of the stage created cavernous environments that in the final scene were revealed onstage as destroyed rubble. For A Midsummer Night's Dream, objects in contrasting scale and the suspension of singers on swings engaged attention to perspective. His designs for Jerusalem (1997) and Die Dame Ohne Schaten (Vienna State Opera, 1998) were critically acclaimed for their definition of performative space. Levine's sets for the opera Dr Ox's Experiment and his scenography for Tales of Hoffmann and Rusalka (2002) and Les Boréades (2003) for l'Opéra de Paris are significant re-envisionings of the roles to be played by costumes and sets in opera.

Hyperealism has been the theme of several designs. For a production of Candide (English National Opera, 2008), Michael Levine designed an enormous television screen where scenes of the central character's misadventures abroad unfold as a newsreel. His set design for The Flying Dutchman (Royal Opera House, 2011) featured the hulking iron hull of a ship that dominates the stage.

In 2006 Levine designed all four epic operas comprising Wagner's Der Ring des Nibelungen for the Canadian Opera Company's highly anticipated opening season at the Four Seasons Centre for the Performing Arts in Toronto. He made his debut as a director with the prologue Das Rheingold. In 2004 he contributed the designs for Die Walküre under filmmaker Atom EGOYAN's direction (Canadian Opera Company).

Beginning in the late 1990s, Michael Levine returned to designs for plays with Possible Worlds (THEATRE PASSE MURAILLE, 1997) and, for SOULPEPPER Theatre, Platonov (1999) and Uncle Vanya (2001). His work in other genres includes designs for September Songs: The Music of Kurt Weil (RHOMBUS MEDIA, 1995), The Satie project with DANCEMAKERS (2001), The Contract with the NATIONAL BALLET OF CANADA (2002) and Rivers with TORONTO DANCE THEATRE (2012). Yet set and costume design for opera continues to be Levine's main focus and source of acclaim.

In 1981 he was named Chevalier des Arts et Lettres in France. Levine has won numerous awards, including a Toronto Arts Award (1997); Edinburgh Festival Drama and Music Award (Bluebeard's Castle and Erwartung 1993); DORA AWARDS (Spring Awakening, Bluebeard's Castle and Erwartung, Oedipus Rex and The Symphony of Psalms); Critics Award, France, (Benjamin Britten's A Midsummer Night's Dream, 1991); and a GEMINI AWARD for September Songs. Michael Levine is a member of the Associated Designers of Canada, and his designs were featured as part of the Canadian delegation to the Prague Quadrennial in 1999. In 2011 Levine was the recipient of the Distinguished Artist Award from the International Society for the Performing Arts.