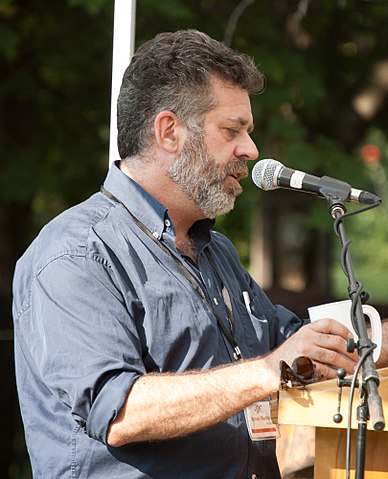 Michael Redhill was born in Baltimore, Maryland, where his father was a medical resident at Johns Hopkins University. He was raised in Toronto from a young age. He attended Indiana University for one year before returning to Toronto to complete his Bachelor of Arts in acting, film and English. He attended York University and the University of Toronto, completing a three-year degree in seven years.

Michael Redhill’s early publications are primarily poetry collections, including Music for Silence (1985), Temporary Captives (1989), Asphodel (1997) and Light-Crossing (2001). He received works-in-progress grants for poetry from the Ontario Arts Council in 1990 and 1994 and Canada Council grants in 1993 and 1996. His poetry has earned him several awards, including first prize in the League of Canadian Poets’ National Poetry Contest, the 1990 Norma Epstein Award and the 1991 E.J. Pratt Prize (see Edwin John Pratt).

Michael Redhill is also an established playwright. In 1993, he was named the Ontario Arts Council Writer in Residence at Toronto’s Tarragon Theatre. Building Jerusalem (2001), a drama set in Toronto on the eve of the 20th century, won a Dora Award for Best New Play and a $25,000 Chalmers Award for playwriting.  It was also shortlisted for a Governor General’s Award for drama. Goodness (2005), a highly personal examination of heartache and the Holocaust accompanied by choral music, won a Scotsman Fringe First Award and the Carol Tambor Best of Edinburgh Award at the Edinburgh Fringe Festival.

Michael Redhill has gained national and international acclaim for his fiction. His book Martin Sloane (2001) won the Books in Canada First Novel Award and the Commonwealth Writers Prize (Canadian-Caribbean Region). It was also shortlisted for the Scotiabank Giller Prize. The novel revolves around the relationship between university student Jolene Iolas and the titular eccentric artist. The unfolding narrative is told by Jolene as she searches for Martin after his mysterious disappearance. Redhill dedicated 10 years and 12 drafts to the production of the novel.

Redhill’s Fidelity (2004) is a collection of short stories investigating the delights, betrayals and failings of marriage, familial relationships and friendship. The focus ranges from a mother trying to connect with her gifted son, a father struggling with his abrupt awakening to his daughter’s sexual maturation, and several men who never seem to know when relationships have ended — or haven’t even begun.

Redhill’s second novel, Consolation (2006), traces the evolution of Toronto through the death of two of its citizens, separated by a century and a half. A mingling of public history and private pain, Consolation demonstrates Redhill’s ability to examine the intricacies and vagaries of human relationships. It won the City of Toronto Book Award and was longlisted for the Man Booker Prize.

Bellevue Square, the first novel Redhill published after letting go of his Inger Ash Wolfe pseudonym, won the Scotiabank Giller Prize. The novel is a literary thriller about a woman who discovers her doppelgänger in a park in Toronto’s Kensington Market. The jury praised the novel for its “complex literary wonders.”

Redhill reportedly only had $411.46 in his bank account before depositing the $100,000 award. Prior to winning the Giller Prize, Redhill supported himself with freelance editing, sessional teaching at the University of Toronto and York University, and selling some of his personal collectibles online. Pursuing writing full-time took a significant toll on his finances. After depositing his cheque, he shared a photo on social media with his new bank account balance: $100,411.46.

In an emotional acceptance speech, Redhill thanked other Canadian writers, specifically Michael Ondaatje and Linda Spalding, for their support and encouragement. He regards the Canadian writing community as a wealth of emotional and artistic support: “All of your writer friends are the ones who say, ‘Yeah, it’s horrible being poor. Keep writing.’”

Michael Redhill has also published under the pseudonym Inger Ash Wolfe, a name partly inspired by his grandmother’s maternal name, Wolfinger. Redhill released his first mystery novel, The Calling, under the name Inger Ash Wolfe in 2008. It centred on small-town Ontario detective Hazel Micallef. The novel was successful, and the author’s jacket hinted that the book was written by a “well-known and well-regarded North American writer.” This led to speculation on the real identity of the author. Some suggested Jane Urquhart, Linda Spalding, Margaret Atwood and Farley Mowat. Others believed it could be Michael Redhill. However, when asked in 2008, he did not reveal his identity. Three other novels by Wolfe followed, The Taken (2010), A Door in the River (2012) and The Night Bell (2015).

In 2012, Redhill revealed his identity as Inger Ash Wolfe in the Globe and Mail, sharing that he had published poetry under a pseudonym in the 1980s and found the experience to be “thrilling.” As an author, the idea of fully disappearing into his characters and his work appealed to him. He would use pseudonymity as a theme throughout his mystery novel series, beginning with The Calling.

The rapidly evolving nature of the publishing industry meant that it was difficult for Redhill to maintain his separate identity as Wolfe, especially since so many people were expecting Wolfe to make an appearance. Redhill admits that as Wolfe he could produce writing faster, but ultimately he decided it was time to reveal his true identity as the author: “so here we are, after seven years of carrying on in private. I admit I’m a little sad about it. Inger fulfilled some peculiar longing in me when she was mine alone, but I’m letting go of her now.”

From 1993 to 1996, Redhill served on the editorial board of literary publisher Coach House Press. He was also the editor of one of Canada’s premier literary journals, Brick, from 2000 to 2009. He has also worked as an editor, ghostwriter, screenwriter, cultural critic and essayist.

Michael Redhill lives in Toronto with his health-care consultant partner and their two sons.