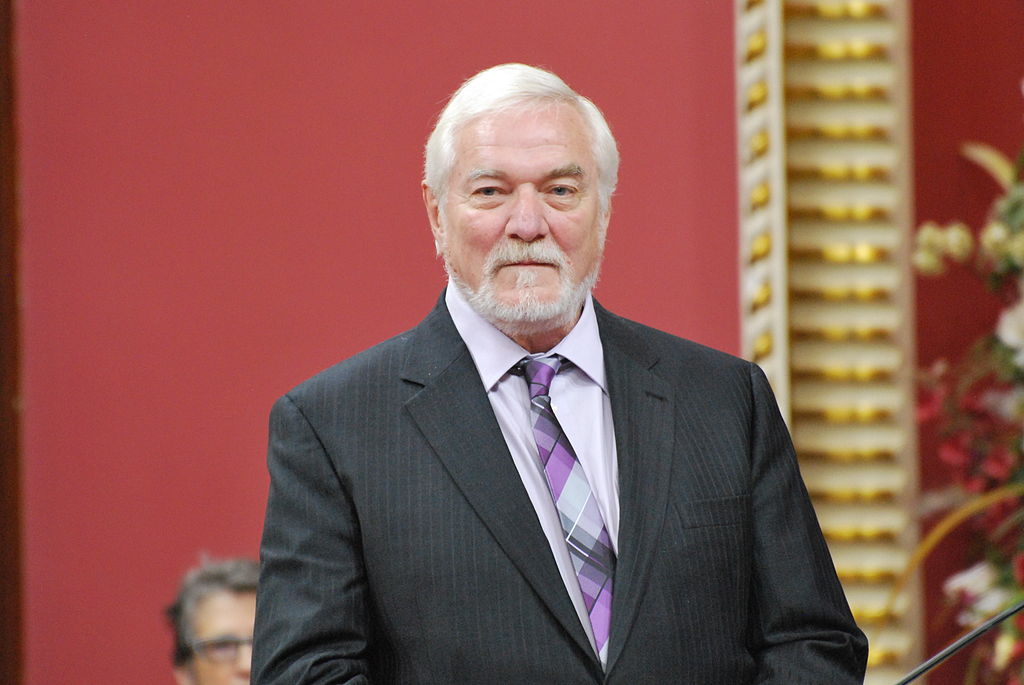 It was in his hometown that Michel Dumont made his first stage appearance, in an amateur theatre festival, and received his very first acting award, presented by actor Paul Hébert. But it was at the Théâtre du Trident, in Quebec City, that Dumont truly began his professional career as a man of the theatre, after brief stints teaching at the Collège de Jonquière and the Cégep du Vieux-Montréal.

Watching the great Québec actor Jean Duceppe play the starring role of Willy Loman in a French-language production of Arthur Miller’s Death of a Salesman, Dumont dreamed of one day performing alongside him. His dream came true in 1973: Duceppe had just founded his own theatre company and moved it into the Théâtre Port-Royal at Place des Arts in Montréal. He cast Dumont in the role of Willy Loman’s son Biff in the production of Death of a Salesman that opened there. This marked the start of a long, wonderful collaboration between these men.

It has been said that in the scope of his career, Michel Dumont “has no equal but the imposing figure of that profoundly subtle actor, the great Jean Duceppe.” In his career, Dumont interpreted all of his roles with professionalism and sensitivity. Over the years, he appeared in Of Mice and Men, by John Steinbeck (1987); Twelve Angry Men, by Reginald Rose (1987); À toi pour toujours, ta Marie-Lou by Michel Tremblay (1996); Un simple soldat, by Marcel Dubé (1998); Cat on a Hot Tin Roof, by Tennessee Williams (2000); Uncle Vanya (2006) and The Seagull (2007), by Anton Chekhov; and Amadeus, by Peter Shaffer (2009). Dumont also participated in the translation of numerous plays into French, including several by American playwright Arthur Miller.

After Jean Duceppe died in 1991, Michel Dumont took over as artistic director of his theatre company, the Théâtre Jean-Duceppe (or simply, DUCEPPE). Carrying on Duceppe’s mission, Dumont strived to offer his audience a theatre of “feelings and identification” as his mentor had imagined it.

In addition to his work on stage, Dumont displayed his acting talents on television. In 1972, he played the role of Fantoche on Picotine, a children’s show aired on Radio-Canada, which he co-wrote with Linda Wilscam. His other notable television roles included Jos in the dramatic series Race de monde (1978–81) by Victor Lévy-Beaulieu; Minister Alain Robert in Monsieur le ministre (1982–86) by Solange Chaput-Rolland; and Michèle Bazin, and Gilbert Trudel in Les dames de cœur (1986–89) by Lise Payette. He played Henri St-Jean in Marilyn (1991–94, also by Lise Payette) and Captain Gilbert Tanguay in Omertà, la loi du silence (1996–97), a police drama series scripted by Luc Dionne. Dumont also appeared in La part des anges (1998–99), as well as in the series Bunker, le cirque (2002) and the highly popular series Providence (2009–11) and Yamaska (2009–16).

Michel Dumont served as narrator of the theatrical spectacle La fabuleuse histoire d’un royaume, written and created by Ghislain Bouchard, which was presented in Dumont’s native region of Saguenay-Lac-Saint-Jean beginning in 1988. In 2006, he hosted and narrated a new version of the popular show Dossiers mystères on Canal D. In 2010, he lent his sombre, theatrical voice to a Montreal Symphony Orchestra production of Beethoven’s The Creatures of Prometheus, reading a text by Yann Martel.

Michel Dumont’s first film appearance was in Jean-Claude Lord’s Éclair au chocolat (1979). In 1980, Dumont appeared in De jour en jour, by Robert Desrosiers. In 1990, François Girard cast him as Philippe in his feature film Cargo. Almost 10 years later, Dumont showed himself in top form when Denise Filiatrault chose him to play Michel Collard in her film Laura Cadieux...la suite. He appeared in Café de flore (2012) by director Jean-Marc Vallée and in Le Garagiste (2015) by Renée Beaulieu. This last performance earned him three nominations for the Canadian Screen Awards in 2016.

Michel Dumont won the Prix Gémeaux for Best Actor in a Supporting Role in a Drama Series three times (1998, 2003, 2013). In 2001, he received an honorary doctorate from the University of Québec at Chicoutimi. In 2010, Québec’s National Assembly recognized him for his work as spokesperson for the Montréal South Shore chapter of the Alzheimer Society. He was made an Officer of the Ordre national du Québec in 2013. In the interviews that he granted Pierre Maisonneuve for the book Michel Dumont, grandeur nature (1999), Dumont said that he was never happier than when he was on the stage. He died of cancer at age 79.