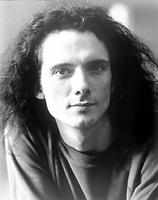 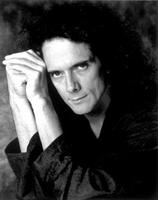 Robert Guy Desrosiers, dancer, choreographer, director (born at Montréal, Qué 10 Oct 1953). Robert Desrosiers, a brilliant dancer in his own right, has gained international renown as a choreographer of startling imagination and originality. He studied at the NATIONAL BALLET SCHOOL (1965-71) and danced briefly with the NATIONAL BALLET OF CANADA (NBC) before continuing to perform and train in France, England, the US and Canada.

He was unwilling to settle long in any one company and instead began to develop his own choreographic ideas, which found full expression in the creation of the DESROSIERS DANCE THEATRE in 1980. Desrosiers's work was quickly acclaimed for its unique blend of movement, decor, music, film/video, song, speech and inventive stage effects. Works of this period - Nightclown and Brass Fountain (both 1980), The Fool's Table (1982) and Ultracity (1986)- were often described as fantastical or surreal. In 1986 he also created a major, evening-length multimedia spectacle, Lumière. His 1988 Incognito was commissioned by the Calgary Olympic Arts Festival and involved magical illusions in its depiction of one man's struggle with mental illness.

Rarely creating outside his own company, in 1985 he accepted a commission from Erik BRUHN for the National Ballet of Canada. The result, Blue Snake, with its mechanized sets and elaborate costumes, remains one of his most extravagant and spectacular works. It was also performed by the NBC at the Metropolitan Opera House in New York in 1988. Desrosiers has also choreographed for WINNIPEG'S CONTEMPORARY DANCERS, the Lyons Opera Ballet in France and the National Ballet School.

In 1990 Robert Desrosiers largely revamped his company, putting more emphasis on movement and choreography and less on flamboyant theatricality in such works as Jeux (1990), Full Moon (1991), Black & White (1991) and Black & White in Colour (1993). In later works such as Corridors (1996), however, Desrosiers returned to his more familiar style. His company has toured across North and South America, to Europe, Australia, Japan and Singapore. In March 1996 Desrosiers ambitiously staged a season at Toronto's O'Keefe (now Hummingbird) Centre. While an artistic success, it was financially crippling, and Desrosiers's company was compelled to scale back operations. Although it continued its school programs the company lost the visibility and prominence of its earlier years. Desrosiers meanwhile fell out of favour with government funding agencies because of what was perceived as a lack of artistic evolution in his choreography. The company ceased operations in 1999.

After the demise of Desrosiers Dance Theatre, Robert Desrosiers took a break from dance to reflect and to pursue visual art. Despite the hiatus, interest in Desrosiers as a teacher, choreographer and personality persisted. In 2001 the DANNY GROSSMAN DANCE COMPANY, whose mandate includes the preservation of significant modern-dance works, revived Desrosiers's Bad Weather from 1982. From 2004-06 Desrosiers was the host of a documentary series on Canadian dancemakers, which was produced and developed in association with Bravo! Canada. In 2003 Desrosiers was cast as the ambitious artistic director of a fictitious ballet company in Robert Altman's film The Company, starring Neve CAMPBELL.

Robert Desrosiers is a guest artist with Ryerson Theatre School and in 2007 he premiered Rendezvous, a commission from BALLET JÖRGEN CANADA with a score by Eric Cadesky, Desrosiers won the JACQUELINE LEMIEUX Prize in 1980 and the Jean A. CHALMERS Award in Choreography in 1985.