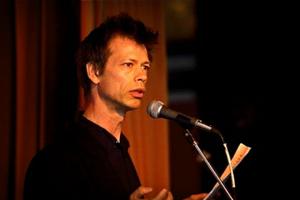 Of Dutch-Indonesian heritage, Hoolboom used his father's Super 8 camera to shoot much of his early work, in which he is fascinated with dismantling the mechanics of meaning: how language and narrative work, how physicality determines perception, how film itself conveys ideas. Often intensely personal, Hoolboom's early films use autobiographical images and recollections to anchor their investigation of forms of mediated discourse. A seemingly tireless model of low-budget ingenuity, Mike Hoolboom has been known to assemble complete films from leftover, unused and recycled footage from his other movies.

A critic and curator as well as a filmmaker, he was diagnosed as HIV-positive in 1989, a development that effectively shifted the terms of his work from the personal to the more broadly political. Some of his films, including Valentine's Day (1994), moved toward more conventional forms of narrative while others, such as House of Pain(1995), challenged audiences with increasingly explicit images of sexual transgression.

Mike Hoolboom's work in the late 1990s confronts problems of perception in an image-saturated mass culture. Works such as Shooting Blanks (1995), Dear Madonna (1996), In the Future (1998) and In My Car (1998) contain stolen images from music videos, Hollywood blockbusters, European art cinema and commercial television. Hoolboom recontextualizes them, changes their meaning, and asks his audience to question their presence in our individual and collective consciousness.

Panic Bodies (1998), an anthology of short films, is a direct and passionate cinematic confrontation with AIDS. It played to critical acclaim at various international film festivals. In 2002, Hoolboom completed a daring feature-length biography of New York experimental filmmaker Tom Chomont. Entitled Tom, the film had its world premiere at the 2002 Berlin International Film Festival. Other works include both short - In the Dark (2003), The Invisible Man (2003) - and, prolific as ever, feature-length: Imitations of Life (2002), a meditation on the meaning of cinema itself; Public Lighting (2004), a penetrating examination of contemporary media's obsession with forms of biography; Fascination (2006), a poetic essay/tribute to trailblazing Canadian video artist Colin Campbell; and Mark (2009), a meditation on the suicide of his longtime collaborator-editor, Mark Karbusicky.

In addition to his extraordinary output as a film and video maker, Mike Hoolboom is also a tireless and perceptive writer on contemporary media culture. In 1997 he published Inside the Pleasure Dome: Fringe Film in Canada, a collection of interviews with Canadian experimental filmmakers. This book was updated and released in a second edition with additional interview material in 2001, followed in 2009 by another volume of artist interviews entitled Practical Dreamers. Mike Hoolboom's own writing includes . Plague Years: A Life in Underground Movies (1998), a personal memoir and meditation on cinema, media and desire. In 2008 he also published a critically acclaimed novel called The Steve Machine.