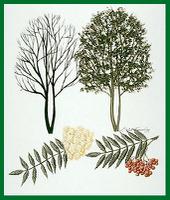 Sorbus decora is native to Canada. Its small applelike red berries are much sought by birds (artwork by Claire Tremblay).

The introduced European mountain ash or rowan (S. aucuparia) is grown as an ornamental from Haida Gwaii to Newfoundland and Labrador, and often escapes, appearing native. In some reference works, Sorbus is included in the genus Pyrus (pear). Berries and bark were used as medicine by North American First Nations. The wood is easily bent and was used for canoe frames and snowshoes. Mountain ash is not a true ash.