"So you know, we’d spend a whole day up at the front and get shelled the odd time and they’d tell you to get down or get into bunker or do something, get out of the road mainly because they wanted to fight, so you got out of their road."

"So you know, we’d spend a whole day up at the front and get shelled the odd time and they’d tell you to get down or get into bunker or do something, get out of the road mainly because they wanted to fight, so you got out of their road." 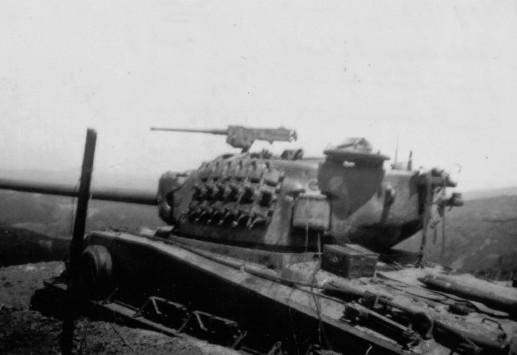 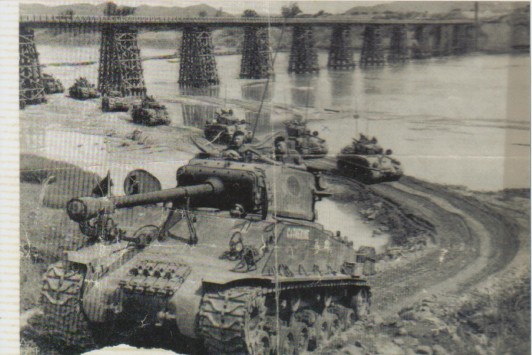 I had been in the reserve, 20th[(Saskatchewan)] Armoured [Regiment] reserve for quite a while, and a guy by the name of Vick Dinhey, who was a sergeant-major in the Strathconas [Lord Strathcona’s Horse (Royal Canadians)] was on staff in Moose Jaw [Saskatchewan] and he said, “Why don’t you join the army, I’ll talk to your mother about it, you get a good steady job and you travel,” and blah, blah, blah. So I ended up going to Regina [Saskatchewan] with him and getting in the army and going to basic training. And that was in, oh God, 1948 I think it was.

I didn’t even know it was on. I didn’t know what it was on until I got shipped out of, I was in [Canadian Forces Base] Suffield [Alberta] testing napalm bombs on tanks. And they put me on an airplane and flew me to [CFB] Wainwright [Alberta] to Sergeant Major, Armour. I reported to him and he said, “Well, Corporal Cooper, you’re in B Squadron and you’re going to Korea in two weeks.” And I didn’t even know where it was. I mean, I never even heard of the country before. So the next thing you know, we’re on a train at Wainwright going down to Seattle [Washington], getting on a boat and sailing the Pacific. That quick.

But anyway, we got to Yokahama [Japan] and they took all the Americans off the boat and reassigned them and then put them all back on and we were there for about a day and a half and then we went around then to Japan and up to a place, Inchon [South Korea]. And we landed at Inchon. And of course, everybody got off the boat and down the rope things and everything in them little boats and into shore and then we went to directly east to Seoul, north from Seoul to a place called Uijongbu, and then we went west from there on I think it was route 5 I believe it was, over to what they call Gloucester Valley, that’s where the Gloucester Regiment from England got wiped out just about [at Battle of the Imjin River, 22-25 April 1951]. North on there to almost Teal Bridge, turned right and went down the road about two miles and that was our B Echelon. And that’s where we met all the guys that we were replacing. And they told us what to expect and what to do and we stayed in their bunkers and took them over when they left, we took over their bunkers. So it was pretty neat.

It was hard but everything was there for us. Like the tanks were dug in and we took them out of where they were dug and moved them to other positions and dug them in but you know, everything was there for us when we got there. So we didn’t really, we just thought it was sort of acclimatized ourselves and find out where we were driving and learned to read maps all over again and find out where we were going.

They give you R&R [rest and recreation] and they sent six of us to Seoul for three days and then we had a week in Japan, seven days in Japan, we flew over and flew back. But that was all sort of like escort. You had a sergeant with you that took you down in the airplane, put you on the airplane, put you through the rigmarole to get on the plane and everything and you’re, they always knew where you were because you were on the list that said, “You got on this plane at 10:22 and you’re going to get off it at 11:57.” So they knew exactly where you were.

We were in Hiroshima [Japan] about five or seven years after the atomic bomb dropped and it was flat. They took us down their, the ship was ERLClackstonor some, it was a little motor launch type of thing. And they took about 40 of us down to Hiroshima and then on a bus to Nagasaki [Japan], an old rattle trap bus, but we seen Hiroshima and Nagasaki while we were there and it was something to see, I’ll tell you. If they start a real bad war with them things, it’s going to be total annihilation whoever gets hit. So, but we seen that. And of course, we went, what do you call it, the Ginza Market [Tokyo, Japan] I believe it was, we went to do our shopping. And it was fantastic.

In Korea, the Koreans didn’t have much because everything was just, Seoul was totally flat, except like the train station was partly standing with lots of holes in it. There was two or three two story buildings that were pretty well shot up, but there wasn’t that much left of Seoul.

We looked after the tanks on the front lines, so if they were having problems, we had to go up and fix them in the front line. So most of the, most of the problems were with auxiliary generators and armament, so Russ – Gus Vallier, who was our armament guy, he’d go up to look at the guns and we’d go with him to check the tanks over and stuff like that. So you know, we’d spend a whole day up at the front and get shelled the odd time and they’d tell you to get down or get into bunker or do something, get out of the road mainly because they wanted to fight, so you got out of their road.

But we were, in the echelon [unit subdivision], we were basically, I would say we were in echelon probably 50 percent of the time. The rest of the time, we were up driving around the front to tanks and stuff like that. So you know, it was all organized, everybody knew where everybody was. They wanted somebody, they radioed you and you sent somebody up and if they needed ammo, you took them ammo and stuff like that. So everybody worked together.

When you’re up at the front, it was, if you’re getting shelled, they give you a pad and you had to sort of take a compass and show the direction the shell was coming from and where it went and it landed. So that they could find out where their artillery was. So you didn’t get away with just sitting there and doing nothing, everybody worked all the time.

These were the Korean guys, they backed ammunition up to the tanks, they cleaned up the mess hall, they shined our boots, the little kids shined our boots, and these guys on these little A-frame things were bringing wood over, so you had wood for a fire if you wanted it. We had about probably eight or ten of them in our echelon and then of course, every time an ammo truck went out, they always took four or five of them because they could carry about ten rounds of ammo on these A-frames up to the tanks. They could carry a load of sticks and you couldn’t even see the guy that was carrying it. That’s how big it was.

But we lost, Camponi lost a tank too, we lost two tanks and two guys, Bernie Wulner and [Leonard George] Neufield, we lost those two guys when we were there. We lost another guy but he was originally C Squadron and he stayed over with B Squadron because he was sick or something. So he stayed there with C Squadron and he died when B Squadron was there so they attributed his death to B Squadron.

It’s like a big family and you lost a couple of guys. You get guys wounded and stuff like that and everybody knows everybody. So it, it, well, it hurts in a way because you think about it. So then it becomes on your mind and you think, well God, I’d better not go around this corner too quick, let’s be careful because Neufield got shot. So you think about things like that. But the, it’s part of war again, you know, you have to expect stuff like this.