"I took a walk through many of the rows of tombstones at the Pusan cemetery to find some of my close friends who were there. I told myself that I would see that once in my lifetime."

"I took a walk through many of the rows of tombstones at the Pusan cemetery to find some of my close friends who were there. I told myself that I would see that once in my lifetime." See below for Mr. Roy's entire testimony. Please be advised that Memory Project primary sources may deal with personal testimony that reflect the speaker’s recollections and interpretations of events. Individual testimony does not necessarily reflect the views of the Memory Project and Historica Canada. 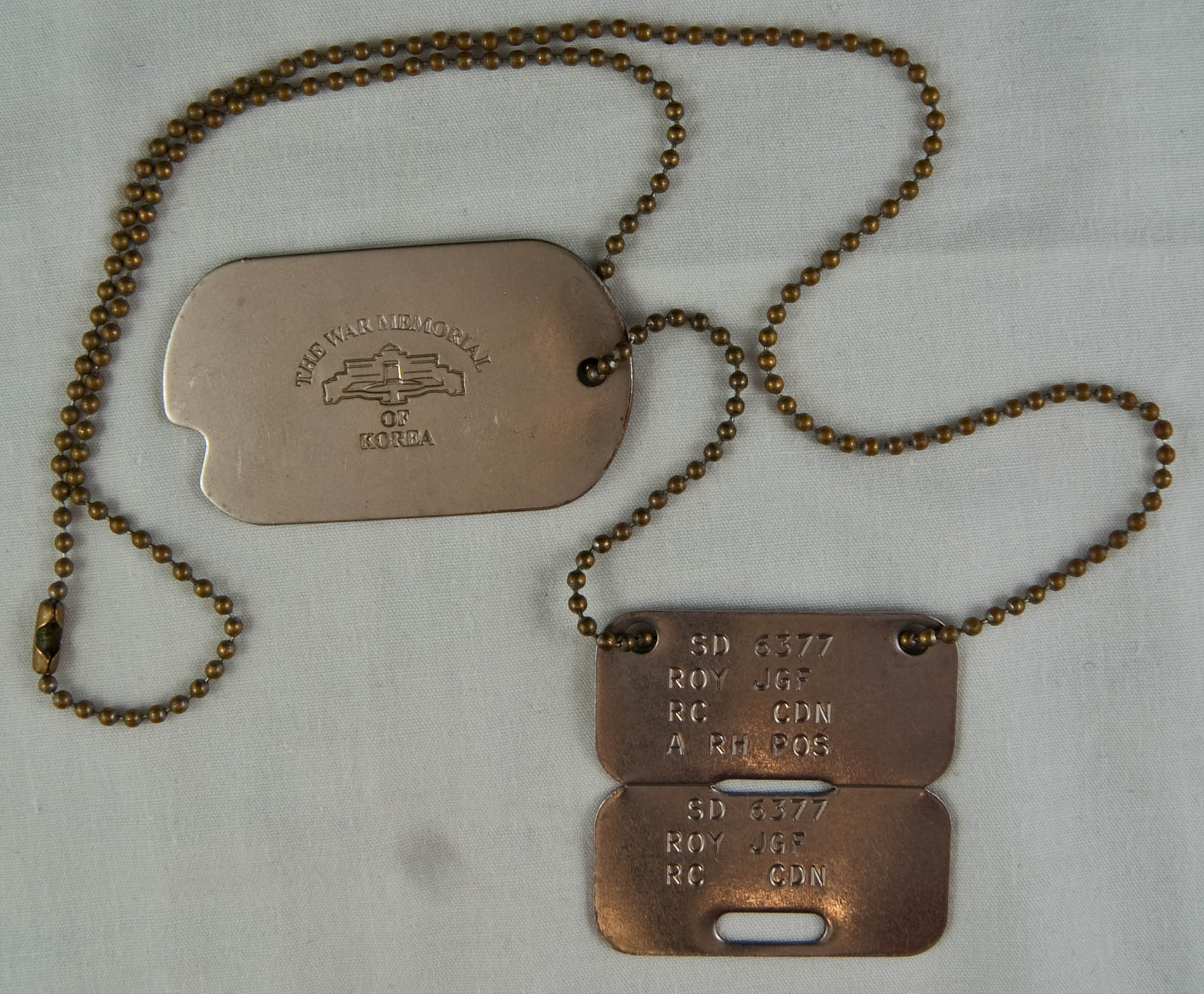 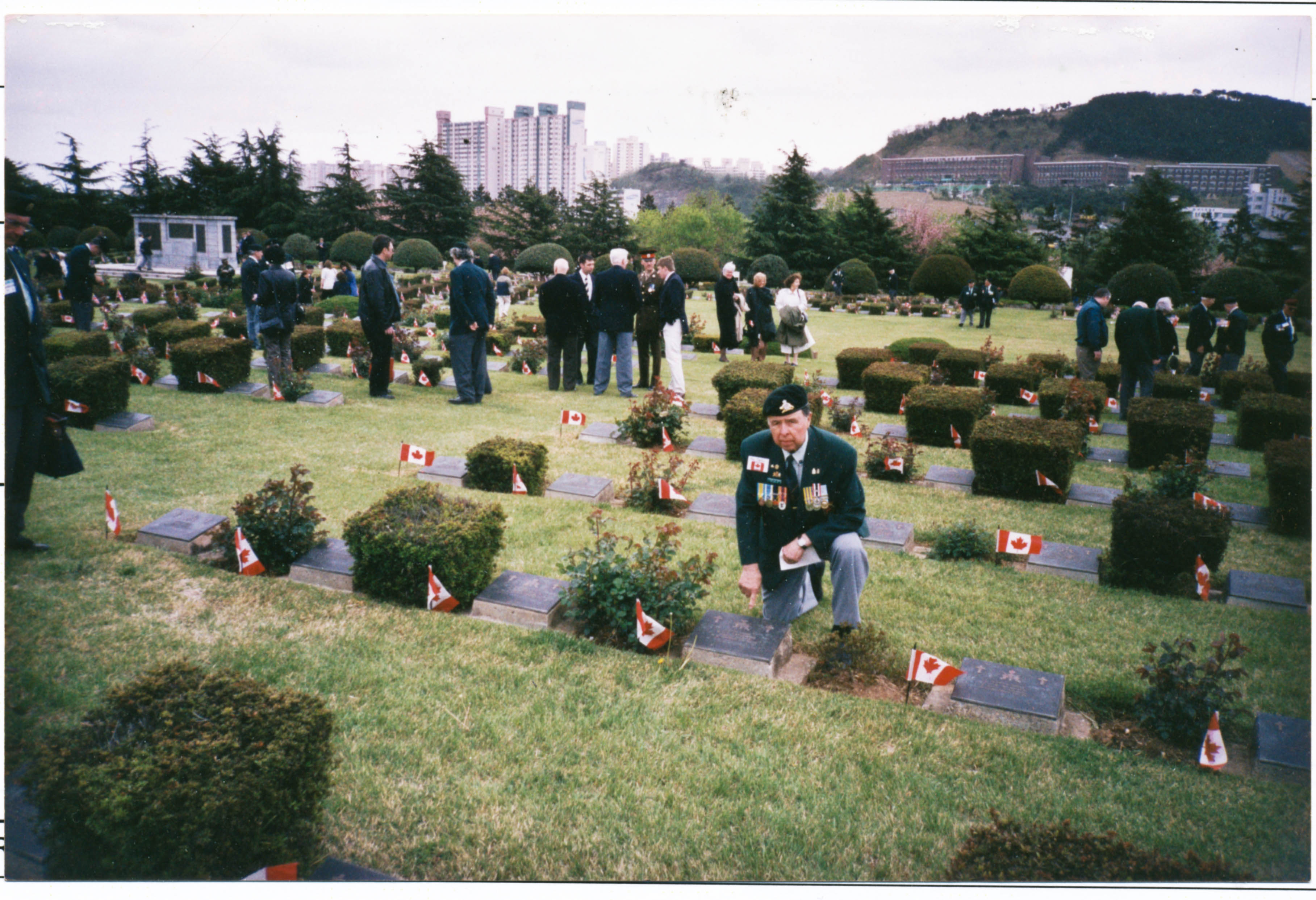 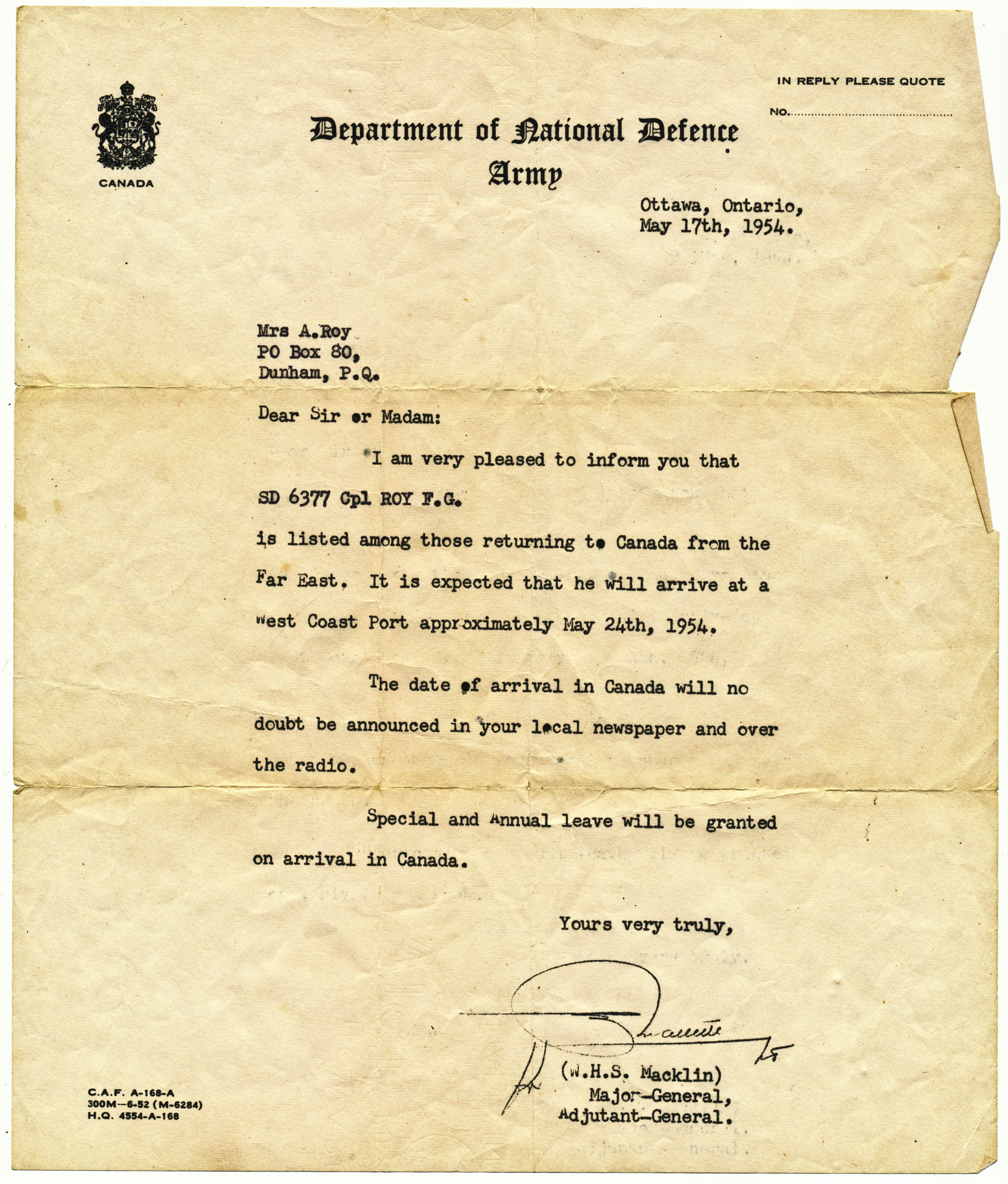 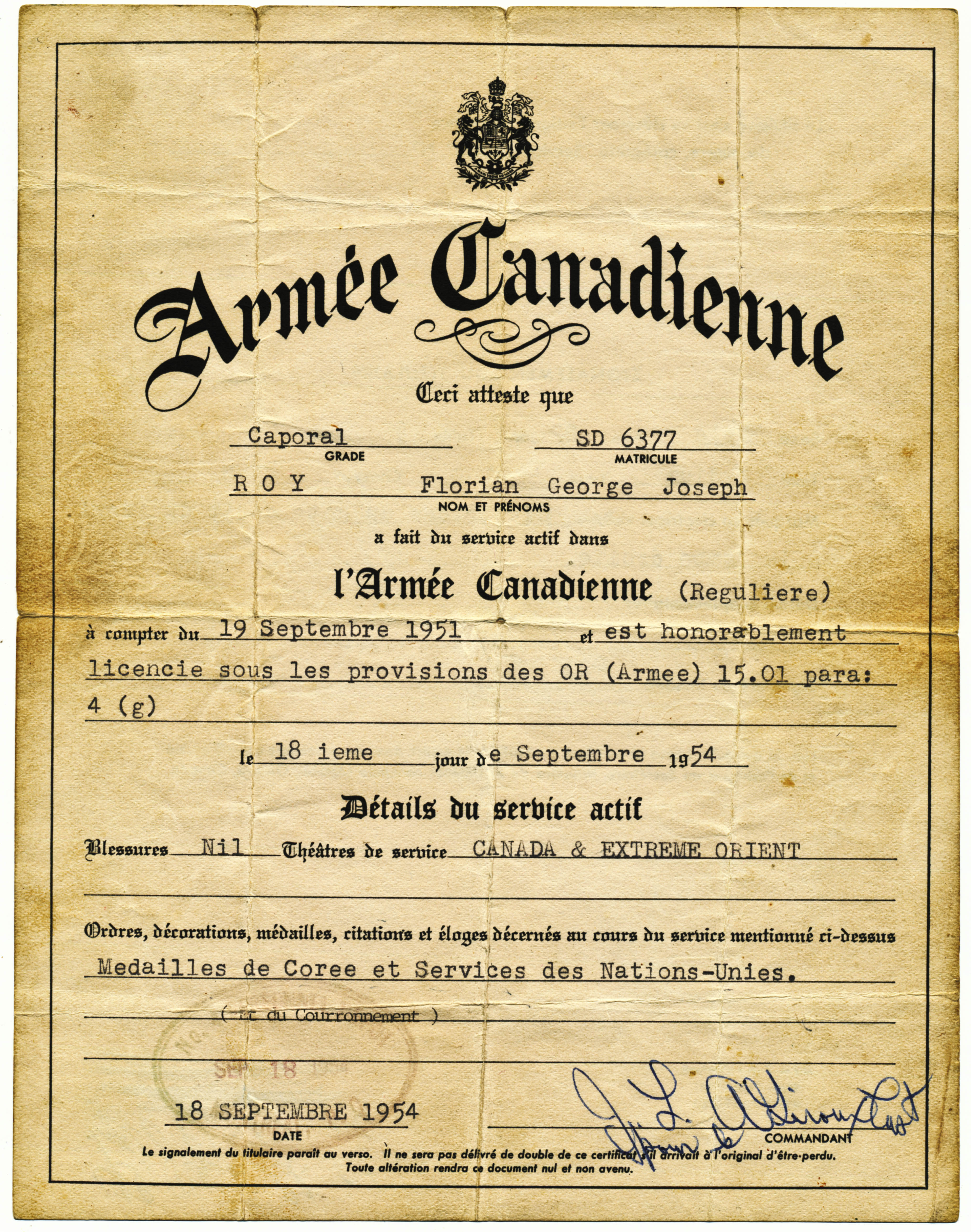 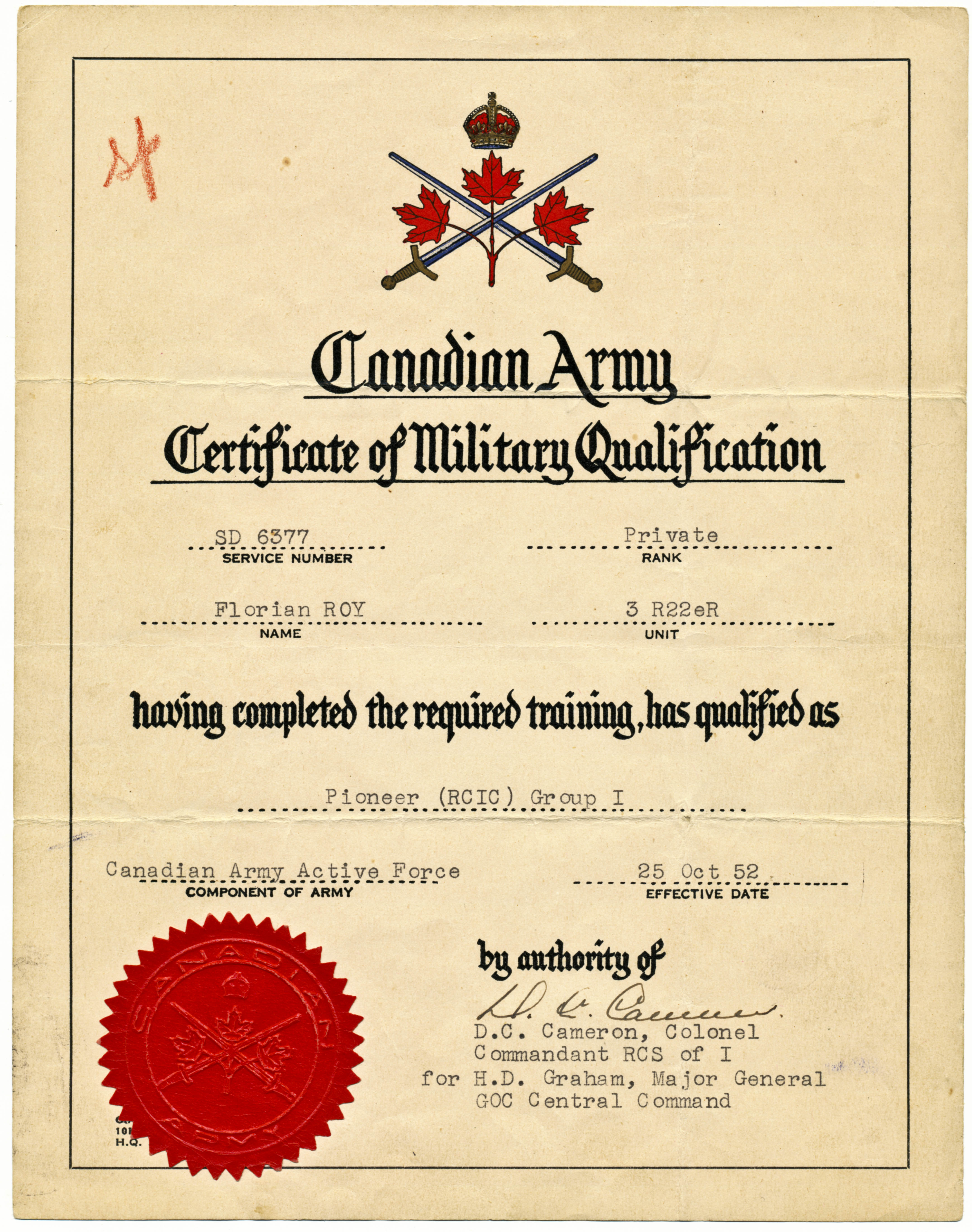 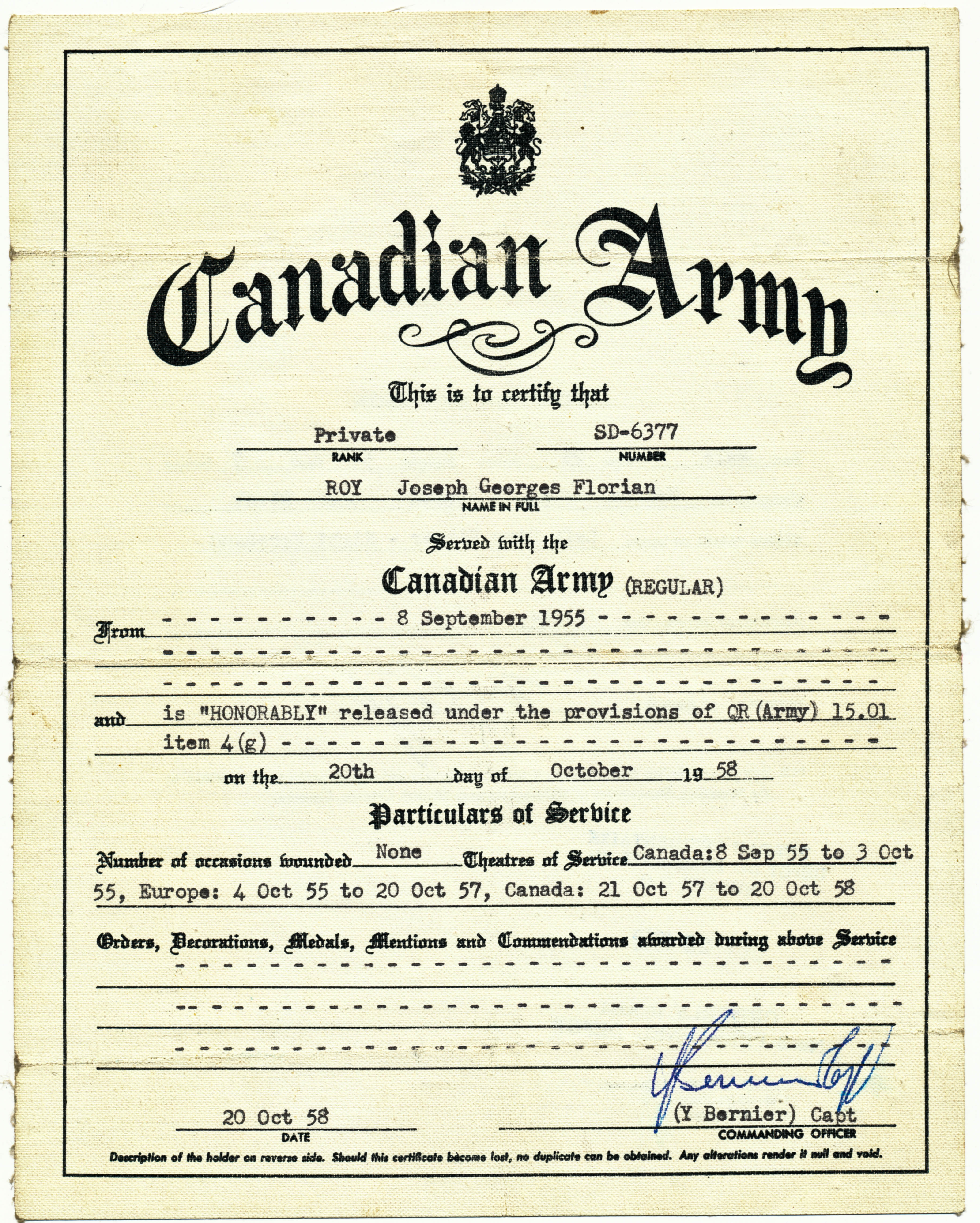 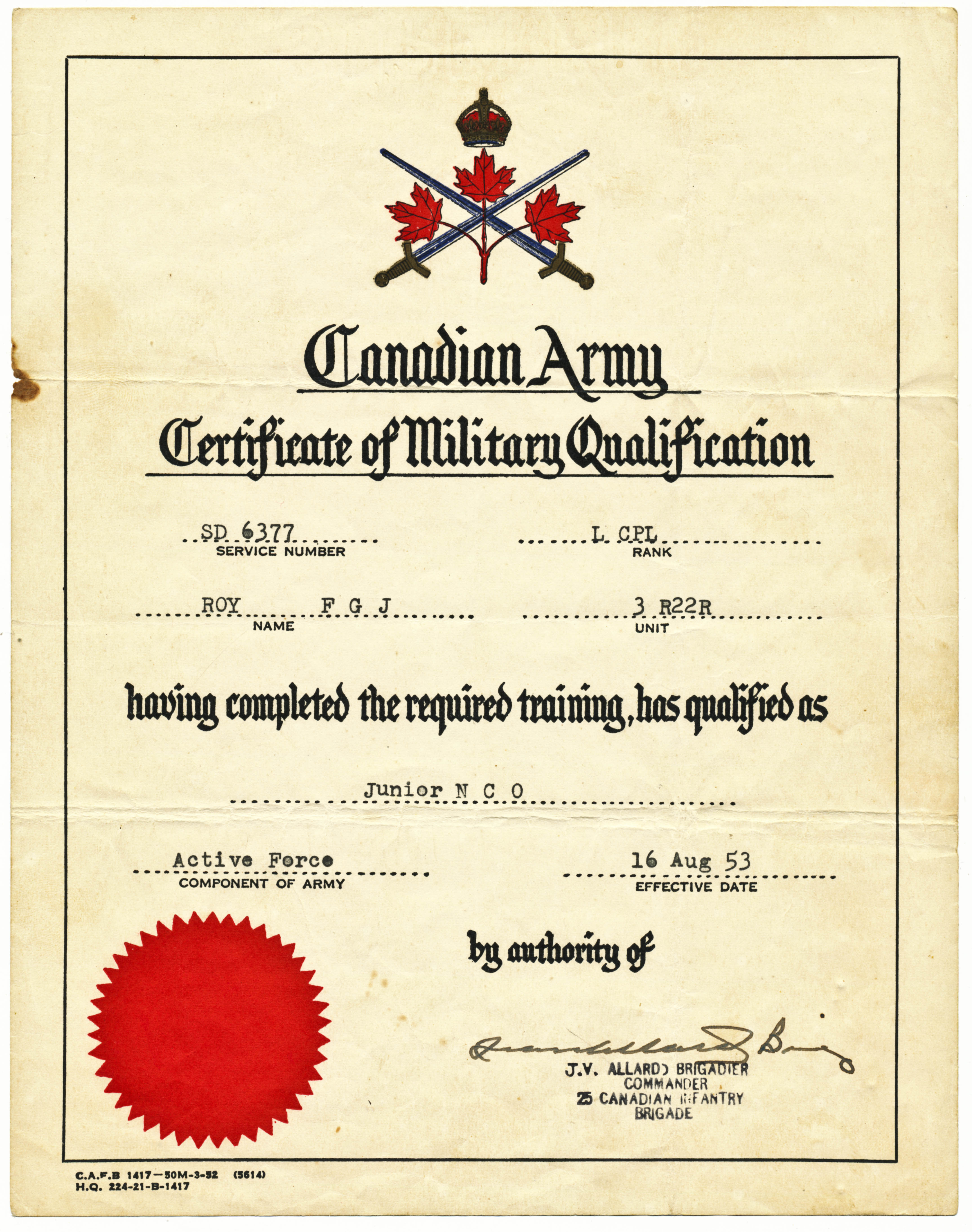 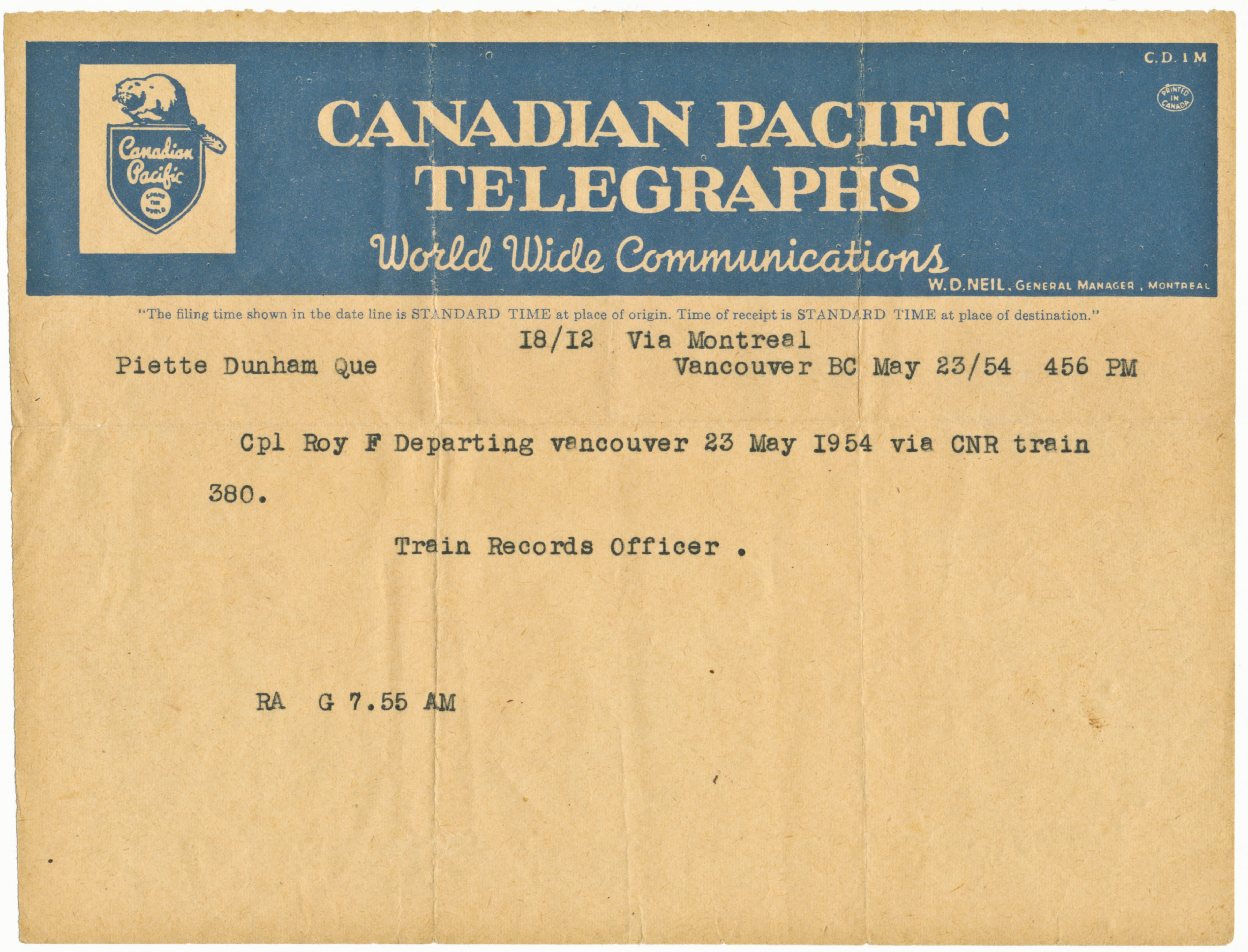 First off, after having completed my basic and specialized training in Wainwright, Alberta, then sent me to Camp Borden in Ontario to learn how to set up mines and make floating bridges and things like that. They called it being in the “pioneers’ platoon” of the Royal 22nd Regiment, the third battalion (deployed in Korea in 1953-1954). We were in charge of setting up obstacles such as barbed wire, removing mines to make gaps in mine fields, helping troops patrol or who were going out on patrol or who were coming back from patrol, removing obstacles in front of positions, making bridges to bring over supplies or helping vehicles cross over. So that’s what I did. And when there were things that the troops couldn’t transport themselves, we destroyed them on site so that no one else could use them.

Even today, at 79 years of age, I think it’s difficult to believe that we left a country (Canada) where we pretty much had everything we needed to survive, even if we weren’t rich, we lived well…to go to a place that was in ruins, that was completely destroyed, where there were little straw huts made with mud and things like that. People lived like that, in the bushes between the mountains. We would arrive in position and we would find children and people hiding in the mountainous areas here and there, and we would hand them over to the Red Cross. We couldn’t communicate with them, that was clear enough. They were simply scared and wanted food. They needed clothing and help. So that’s how we helped them. So we would people like that, in addition to doing our jobs of removing and setting up mines or other obstacles, like setting up or removing barbed wire, or various things like that.

Since I was a corporal, I had a few men below me to whom I would give minor orders that I had received from officers higher up. We had a certain area that we had to cover and monitor when we were in position; the valley to a certain degree to the left and a certain degree to the right. If we saw movement or anything like that with our binoculars, we relayed a message back to the officers who would either contact the planes we had in Seoul that would come out and bomb the area, or they would contact the artillery that was behind us to direct the shells quickly to the position, a given location in the valley. And if we continued seeing movement the next night, at dark, a patrol would go out and they would have to take the valley and try to get to the position. Then they would try to discover how many of the enemy there were and what sort of weapons they had. Were there many or just a few? Or was it just a tactic to harass us, call us out? To let us know that they were there, in front of us. They were playing with our morale.

They had asked us to try to get all of the details so that we could tell them what kind of weapons they were carrying and to get some sort of planning, movement, an advance or something like that. They called the positions in front “Chinese holes.” They were holes in the side of the mountain and if the planes came out to bomb them, they launched napalm bombs. The side of the mountain would be on fire, a real inferno, and then five minutes later they would come out of their holes and we could shoot them.

What did we learn? The Chinese who were fighting against us were armed with Russian artillery. How did they get it? They were Russian guns used mostly for personal defense. The North Koreans were infiltration specialists. They could crawl up, could take up positions that were very difficult for us to find. On Christmas Eve (1953), they crawled up right in front of our positions, a few hundred yards away from us, and they brought us Christmas cards which they inserted into our barbed wire, which was protecting our positions. The next day, we went down into the valley to see what was blowing in the wind. We came back with the Christmas cards. They said, “Go away you Canadians, go back to Canada! We don’t want to fight you. You’re fighting for the Americans, and we don’t want to fight you. Go home!” In the cards were also lovely photos of families and children and all the nice things that were happening back home. Sometimes they would play music for us when they came to bomb us. They came out of their holes and would play us songs, musical pieces similar to what we would hear back home in Canada.

That was very painful for us, it really affected us. I turned 18 over there, in the Korean mountains. I wondered whether I could be going home, and what would happen. I would hear about friends that were shot by the enemy. Some of them died and some of them were taken to the hospital. I wondered whether I would go home, or whether my life would be ending in Korea. I would often think things like that when I was there.

I took a walk through many of the rows of tombstones at the Pusan cemetery (United Nations cemetery in South Korea) to find some of my close friends who were there. I told myself that I would see that once in my lifetime.