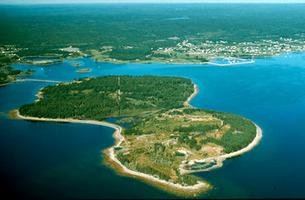 In 1795, 16-year-old Daniel McGinnis discovered a depression in the ground near a huge oak tree and evidence that a block and tackle had been used there. McGinnis and 2 friends dug at the site, revealing a filled-in shaft with platforms of decayed oak logs at 3 m levels. They quit digging after 9 m, but in 1804 returned and reached the 30 m level before the shaft filled up with salt water.

Subsequent digs uncovered tunnels connecting the "money pit" with the ocean. A dam built to solve the problem was destroyed in a storm. Vast sums of money have since been spent in excavations that have cratered the island, and 4 treasure hunters died in an accident in 1965. Though no treasure has been found, a submarine TV camera, lowered into a cavity 60 m below the surface in 1971, produced faint images of what is thought to be 3 chests, a pick and a dismembered human hand.