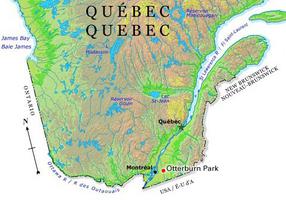 The name Otterburn is a reminder of the birthplace of Sir Joseph Hickson, general manager of the Grand Trunk Railway from 1874 to 1890. The name of this northern English town was given to a park set up in 1885 by Bruce Campbell and his brothers, sons of Major Thomas Edmund Campbell, the seigneur of Rouville. They chose that name as a tribute to Hickson, who had acquiesced to the establishment of a railway station opposite the entrance to their park. Until 1943, Bruce Campbell was sole manager and owner of the park, which attracted Montréalers in search of fresh air and outdoor swimming facilities. It was the preferred destination for Montréal company picnics and for family outings, particularly by railway personnel. The park outlay included a dance hall, a bandstand and the oldest canoe club in Canada.

The early residential growth of Otterburn Park goes back to 1912, when Ernest J. Spiller and David Mason, real estate dealers from Montréal, decided to buy and subdivide land there for cottages. Their first lots were sold to Grand Trunk Railway employees from the Pointe-Saint-Charles railyards, a majority of whom were English Catholics. This explains why Otterburn Park was 85% English-speaking in 1961. The growth in population since 1981 has accelerated demographic change. Anglophones, who still accounted for 65% of the total in 1971, had dropped to 13% by 1996.