From the Woodland Period: the basic sequence of projectile points found at the Oxbow site, NB (courtesy Patricia M. Allen) 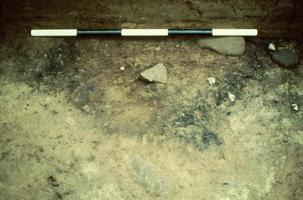 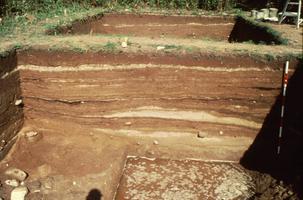 The Oxbow site is located on a low terrace along the north bank of the Little Southwest Miramichi River, 1 km west of its confluence with the Northwest Miramichi, Northumberland County, New Brunswick. The present day Mi'kmaq community of Metepenagiag, formerly Red Bank First Nation, lies opposite the Oxbow along the river's south bank. Strategically situated at the river's head-of-tide, Oxbow is a deeply stratified Maritime Woodland period village site. It was discovered in the early 1970s by the late Joseph M. Augustine.

An avid reader, nationally recognized trapper (by the Hudson's Bay Company), hunter and former Chief, Mr. Augustine had a keen interest both in his Mi'kmaq past and in the future of his community. Joe Augustine's discovery and subsequent reporting of the Oxbow site and of the nearby Augustine Mound led to over a decade of joint archaeological research by provincial archaeologists and Metepenagiag First Nation.

The Oxbow site was first tested in 1977. Its outstanding cultural heritage value was immediately recognized. The site contained over 2.5 m of pre-European cultural deposits. The site follows the river for circa 200 m and ranges between 40 m and 80 m wide. Working cooperatively with Metepanagiag crews extensive Oxbow excavations were conducted throughout the summers of 1978, 1979 and 1984. Although large scale, these excavations examined less than 2% of the site's known area.

Archaeological Interpretation of the Oxbow Site

Sandwiched between clean bands of river-deposited sands and silts, old village living floors were easily identified and loaded with artifacts from everyday life. Excepting charred vegetable and bone matter, the vast majority of artifacts recovered from the living floors and their associated hearths were remnants of pottery vessels and stone tools such as projectile points, scrapers and axes. Other items such as fragments of stone pipes and gaming discs offered a glimpse of early Mi'kmaq recreation.

Following decorative and stylistic changes in the pottery and lithic artifacts, a chronological framework for the region's Early, Middle and Late Maritime Woodland period was established. The Oxbow site revealed previously unidentified artifact associations within its earliest levels. It offered a solid, radiocarbon dated projectile point sequence, from 2600 BP to 500 BP (Before Present; "present" indicates c. 1950), and it presented enough evidence to suggest the nearby Augustine Mound had been built by the ancestors of the local Mi'kmaq. Most important to Metepenagiag First Nation, the Oxbow site revealed a stable and vibrant picture of early Mi'kmaq life on the Miramichi River.

The Oxbow site sits on the edge of a long deep pool currently known as an excellent Atlantic Salmon fishing location. The upstream end of both the pool and the site marks the meeting place of salt and fresh waters. Identification of the charred botanical and faunal remains from the numerous excavated hearths provided evidence to interpret the Oxbow site as a warm weather fishing village. Hunting and gathering expeditions were launch form the site. Several varieties of wild grains, fruit, nuts and herbs were collected. Bear, moose, beaver, muskrat and other animals were consumed on-site.

The vast majority of all excavated hearths (from the deepest to those just beneath the surface) contained bones of the Atlantic sturgeon. It is worth noting that the largest Atlantic sturgeon ever caught was taken in 1924 on New Brunswick's Saint John River. That fish weighed 811 lbs (nearly 369 kg) and measured 14 feet (about 4.25 m) in length. These large anadromous fish enter river systems to spawn at head-of-tide locations in late May or early June. Atlantic sturgeon produce excellent caviar and tender, rich flesh most suitable for smoking. The Oxbow soils were made for exhibiting post moulds. Some configurations of stakes associated with elongated charcoal features were interpreted as smoking stages.

The Heritage Significance of the Oxbow Site

The Oxbow and the Augustine Mound sites reported by Joseph M. Augustine have been declared New Brunswick Historic Sites and National Historic Sites of Canada. The sites are two of the most impressive Aboriginal heritage archaeological sites in Eastern Canada. The Oxbow revealed Metepenagiag to be the oldest, continuously occupied seasonal village in New Brunswick. In 2007 the Mi'kmaq community of Metepenagiag welcomed guests from far and wide to celebrate the opening of Metepenagiag Heritage Park. This world class cultural heritage interpretation center was a long-held dream of the late Mr. Augustine. Because of him, the historical journey of the Mi'kmaq at Metepenagiag is widely recognized and a great source of pride for this New Brunswick community.