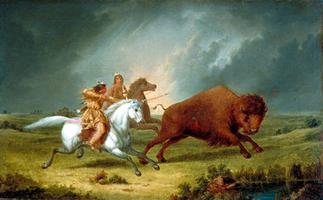 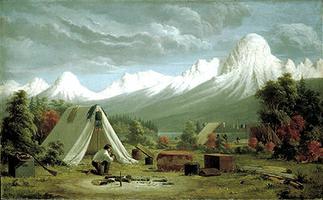 Paul Kane, oil on canvas. This painting shows the formal style of Kane after he has worked up sketches made in the field (courtesy ROM). 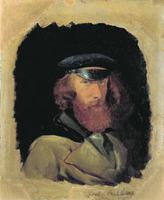 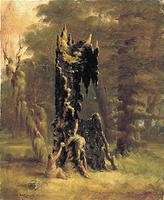 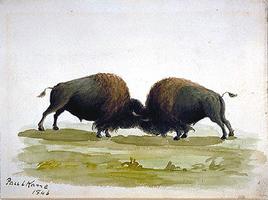 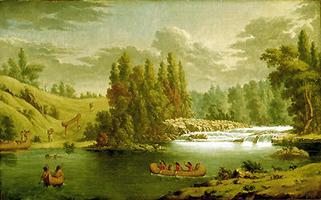 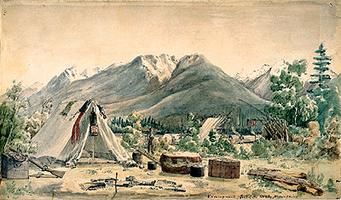 Paul Kane, circa 1846, watercolour. Sketch made by Kane on the Columbia River, BC (courtesy Stark Foundation, Orange, Texas).
PreviousNext

Paul Kane, painter (born 3 September 1810 in Mallow, County Cork, Ireland; died 20 February 1871 in Toronto, ON). Largely self-taught, Paul Kane was the most famous of all Canadian artist explorers, specializing in depicting the lives of Indigenous peoples and settlers in the Canadian West.

Paul Kane immigrated with his parents and six siblings to York [present-day Toronto] around 1819. Showing early talent, Kane is thought to have been mentored during his teen years by Thomas Drury, a drawing teacher at Upper Canada College in the 1830s. During that time, Kane worked as a decorator of furniture and also as a sign and house painter. In 1834, he exhibited nine works at the Society of Artists and Amateurs of Toronto, two of them originals and the rest copies.

After spending five years travelling and painting in the United States (Detroit, St. Louis, Mobile and New Orleans), between 1841 and 1842 he visited Italy to study the old masters, spending time in Genoa, Venice, Florence and Rome. He hiked from Rome to Naples, and eventually left Italy through the Brenner Pass to Switzerland, continuing on to Paris and then London. In London, Kane may have met the American artist George Catlin and viewed Catlin’s Indian Gallery, a showcase of paintings, lectures and performances based on his sketches of Indigenous peoples in the Western United States. Inspired by Catlin’s images and experiences, Kane returned to Canada determined to paint a similar series in the Canadian North-West.

Kane left Toronto in 1845 to sketch Indigenous peoples in their homelands and to collect their legends. He travelled around the Great Lakes but, warned of the dangers of a solitary trip to the Pacific, he contacted Sir George Simpson, superintendent of the Hudson's Bay Company, who arranged for him to accompany the fur-trade canoe fleets to the West. He joined the traders at Fort William [Thunder Bay, Ontario] in May 1846 and travelled west with them to Fort Garry. He witnessed the last great buffalo hunt in that region, continued to Norway House, and followed the Saskatchewan River to Fort Edmonton. After crossing the mountains on horseback, he descended the Columbia River to Fort Vancouver and sketched Mount St. Helens and the coastal tribes around Victoria. He returned to Toronto in 1848, having made over 700 sketches of western scenery and of Indigenous peoples from some 80 tribes.

Paul Kane’s paintings range from portraits to dramatic scenes to landscapes. Kee-akee-ka-saa-ka-wow, Plains Cree (1849–56) is a portrait of a Cree chief. Based on an earlier, more intimate and expressive watercolour sketch, the portrait of the chief has a stern face gazing past the viewer against the background of a stormy sky. In full regalia, face painted, Kane’s intent appears to have been to project the chief’s full power and dignity. Medicine Pipe Stem Dance, Blackfoot (1848), originally shown as part of a suite of paintings depicting Indigenous peoples in the Upper Canada region, which were produced Provincial Exhibition held in Brockville in 1852, features two figures in ceremonial robes engaged in a dance in a semi-circle of other people, one of whom is playing a drum, beside a line of tipis. In the background is the endless flat green of the plains to the horizon, cumulus clouds rising up into the sky. Cackabakah Falls (1849–56) is Kane’s sublime depiction of falls on the Kaministiquia River in northwestern Ontario that he would have seen travelling on the Hudson Bay Company’s voyageur route. Depicted from a knoll, the falls are framed by two massive granite pillars around which the foaming white water surges. In order to underscore the sheer scale of the falls, and perhaps also to emphasize the beauty and sacredness of the site, two Indigenous figures are depicted standing at the edge of the gorge into which the river plunges, one with his arm raised in a kind of salute.

Kane lived quietly in Toronto after his return. He painted canvases from his sketches, rendered in a contemporary European genre style. One hundred canvases bought by George William Allan are now in the Royal Ontario Museum, while 12 bought by the Canadian government are in the National Gallery of Canada. His works were also shown at the World’s Fair in Paris in 1855. Kane's account of his travels, The Wanderings of an Artist among the Indians of North America from Canada to Vancouver’s Island and Oregon through the Hudson’s Bay Company’s Territory and Back Again, was published in 1859 and translated into Danish, French and German. A Canadian classic, full of anecdotes, it complements his sketches in its vivid description of the life of Indigenous peoples, Métis peoples, Hudson’s Bay Company traders and missionaries in the 1840s. Kane also served as a mentor and an inspiration to Canadian painters such as F.A. Verner, Lucius O’Brien and William Cresswell.