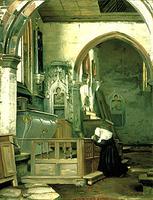 Paul Peel, figure painter (b at London, Canada 7 Nov 1860; d at Paris, France 11 Oct 1892). He spent his formative student years learning the academic style at the Pennsylvania Academy of Fine Arts in Philadelphia, with the great American figure painter Thomas Eakins, and at the Royal Academy Schools in London and at the École des beaux-arts in Paris. His sentimental studies of children, such as The Tired Model (1889) and After the Bath (1890), followed the carefully modelled prescription of the Académie. After the Bath won Peel a medal at the 1890 Salon and displays his skill using light and colour.

Although he was one of the first Canadian painters to portray nude figures, as in his A Venetian Bather (1889), these works were pale compared to those of Degas or Renoir. Works such as Repose (c1890) and Good News, Toronto (1890) show a tentative move away from academic representation and his small impressionistic sketches achieve a remarkable freshness. However, he did not live to develop his art beyond its academic sentimentalism. He died in Paris, where he had spent most of his working life, of a lung infection induced likely by overwork and exhaustion. A major retrospective of his work was held in London, Ontario, in 1987.