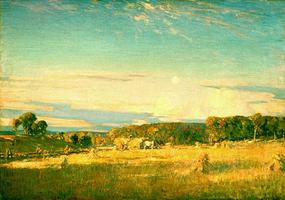 Peleg Franklin Brownell, painter, teacher (b at New Bedford, Mass 27 July 1857; d at Ottawa 13 Mar 1946). After studying at the Boston Museum of Fine Arts, he went to Paris to study under Robert-Fleury, Bouguereau and Bonnat. In 1886 he became principal of the Ottawa Art School and subsequently headed the Woman's Art Association of Ottawa (later Ottawa Art Association), retiring 1937. He also painted in the West Indies, the US, the Gaspé and the Gatineau. Besides highly keyed landscapes, he produced portraits, flower studies, marine and genre scenes in oil, watercolour and pastel.

A founder-member of the Canadian Art Club (1907), he was represented in the exhibitions of several art associations and showed internationally at the 1893 Chicago World's Columbian Exposition; the 1900 Paris World's Fair, at which he won a bronze medal for his RCA diploma work, The Photographer, 1896; the Louisiana Purchase Exhibition, St Louis, 1904; and the British Empire Exhibition, 1924-25. His paintings are found in major Canadian collections. Perhaps his best-known canvas is The Beach, St. Kitts (1913).