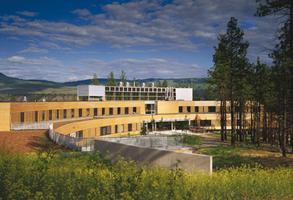 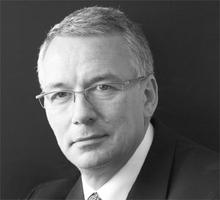 Peter Busby, architect (born at Southport, UK 26 Sept 1952). Peter Busby graduated with a Bachelor of ARCHITECTURE from the UNIVERSITY OF BRITISH COLUMBIA (UBC) in 1977 and, after apprenticing with Rhone & Iredale in Vancouver, worked with Foster and Associates in London and Hong Kong before returning to Vancouver to establish his own practice in 1984. Busby Bridger Architects followed in 1986, Busby Bridger + Associates Architects in 1992 and Busby + Associates Architects in 1996. In 2004 it merged with the US firm Perkins & Will Inc. to become Busby Perkins + Will Architects Ltd. In 2011 Busby Perkins + Will joined forces with Toronto-based Shore Tilbe Perkins + Will and Dundas- and Ottawa-based Vermulen Hind Architects to establish Perkins + Will Canada; Peter Busby became the managing director of the Vancouver office. He is involved in projects located across Canada, North America, Europe and the Middle East.

In 1987 the formation of Designlines, an associated INDUSTRIAL DESIGN practice, enabled the creation of building components, including furniture and hardware, which would contribute to precisely crafted buildings and assist in innovative design. In 1997 Busby was admitted into the College of Fellows of the Royal Architectural Institute of Canada in recognition of the importance and sustained achievement of his work.

Busby's earliest projects evidenced a commitment to the integration of various building systems to enhance both the user and the environment. This was exemplified in Busby Bridger Architects' 1987 Urban Expresso Kiosk. The building made the city of Vancouver, and employment, accessible to the physically challenged via a comprehensive design of all aspects of its operation, including ergonomics, energy needs and maintenance. In 1988 the kiosk earned Busby Bridger Architects the British Columbia Premier's Award for Excellence in Accessible Design. Busby's concerns for accessibility and the quality of urban life are, in a more environmentally sophisticated guise, evident in the multi-award-winning Brentwood Skytrain Station (2001) in Burnaby, BC.

Peter Busby is renowned nationally and internationally as a proponent and practitioner of green building design. His advocacy for green design, which he considers an ethical commitment, is evidenced across a wide spectrum of endeavour. The buildings of Busby + Associates Architects have won prominent and persistent representation in national and international forums showcasing green design since the mid-1990s. Four buildings have been included in the Green Building Challenge process, a biennial forum initiated in 1998 to benchmark international progress in green building: the Revenue Canada Office Building (1998, Surrey), the York University Computing Sciences Building (2000, Toronto), the Telus/William Farrell Building (2000, Vancouver) and the Nicola Valley Institute of Technology (2002, Merritt, BC).

Since 2004, projects continue to further green building and sustainable initiatives as evidenced in Plan Abu Dhabi 2030 Urban Structure Framework (2008), the Van Dusen Botanical Garden and Visitor Centre (2011) at Vancouver, Dockside Green (2008) at Victoria, the Arts + Social Sciences Complex (2009) at Simon Fraser University in Burnaby, and notably on the UBC campus in the Centre for Interactive Research in Sustainability (2006-10), which was not only built to LEED Platinum requirements but also furthers the proposition that buildings in their own right can be laboratories for furthering the study of sustainability.

Busby lectures nationally and internationally on green design and sustainability. In conjunction with the Royal Architectural Institute of Canada, he was instrumental in creating a cross-Canada sustainable-building education program for architects. He has been especially active as an advocate for Leadership in Energy and Environmental Design (LEED™), and his White Rock Operations Building (2002, White Rock, BC) was the first new building in Canada to receive the LEED gold certification in recognition of the high standard of sustainable building practices and performance attained in the building. In 2005 a "Green Operation Plan" was implemented for his architectural office, which was renovated to LEED Platinum standards.

Peter Busby is active on a number of local, national and international committees dedicated to the furthering of the green agenda and was a founding member of the Canada Green Building Council. Busby + Associates Architects' adherence to green performance does not preclude the aesthetic parameters of good design. In 2002 its York University Computer Science Building simultaneously won a World Architecture Award, an International Green Building Award and a Governor General's Award.

Busby + Associates Architects has garnered numerous awards and merit citations for environmental, structural, and lighting excellence; for work in steel, wood and glass; for skyscraper design and resource use; and for heritage conservation and innovation.

The firm has received Governor General of Canada Medals for the Association of Professional Engineers and Geoscientists of BC Head Offices (1997) in Burnaby, the District of North Vancouver Municipal Hall (1997), the Revenue Canada Building (2002) in Surrey, the York University Computer Science Facility (2002), the Nicola Valley Institute of Technology (2004) and Brentwood Skytrain Station (2004).

Busby + Associates has been awarded the Architectural Institute of British Columbia Innovation Award 3 times for projects ranging from the Materials Testing Facility (2001) in Vancouver to the Sustainable Condo Moveable Exhibit (2005) and has received numerous American Institute of Architects awards. The firm earned a Canadian Architect Award of Excellence for the Oltremare Marine Theme Park (2001) in Riccione, Italy, a Holcim Award for sustainable construction in North American Region for The Living Lakes Centre (2008) at Laurentian University, and an Architectural Institute of British Columbia Special Award for Dockside Green-Synergy (2008) in Victoria, also recognized by an American Institute of Architects Award (2009). Peter Busby has garnered more than 100 awards, including 6 Canadian Governor General Awards and 10 Lieutenant Governor Awards.

Peter Busby was named an officer of the ORDER OF CANADA in 2005 and received an honorary doctorate from Ryerson University in 2008. He remains dedicated to furthering sustainability in architectural practices via a range of strategies including, in addition to his design practice, applied research, internal education and public advocacy initiatives. He is committed to developing new strategies for sustainable design including exploring carbon-neutral potentials and renewable energy technology. This longstanding engagement with the complex factors contributing to sustainability as well as advocacy for the profession's role and potential in furthering sustainability goals is recounted in Busby: Learning Sustainable Design (2007).