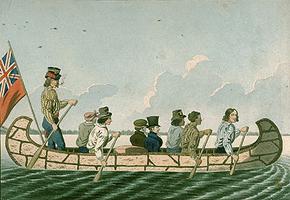 Peter Rindisbacher, painter (b at Eggiwil, Upper Emmenthal, Switz 12 Apr 1806; d at St Louis, Mo 13 Aug 1834). Allegedly a Swiss army drummer boy, Rindisbacher immigrated with his family to the RED RIVER COLONY in 1821. He painted views of the HBC forts along the route from York Factory to the colony, leaving the only visual record of them, and the earliest pictorial record of the country W of the Great Lakes. He spent 5 years in the colony, contributing to family support by selling paintings of prairie and Indian life to HBC officers. Some of these, described as "taken by a gentleman on the spot," in 1823 and 1824, were lithographed and published in London, Eng, in 1824 and 1825. In 1826, repeated hardships finally drove the family to the US. Rindisbacher died at age 28, just as he was gaining success as a portrait artist.