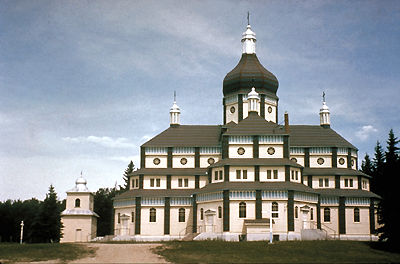 Philip Ruh, priest (OMI) and architect (b Philip Roux at Bickenholtz, Alsace-Lorraine 6 Aug 1883; d at St Boniface, Man 24 Oct 1962). Ruh entered the Oblate Order in Europe and was ordained in Holland in 1910. He volunteered to work as a missionary among the Ukrainian Catholics of Canada and spent 1911-13 in Ukraine learning the language and culture. He came to Edmonton via New York in May 1913 and was assigned to serve all the Ukrainian Catholic settlements north of the North Saskatchewan River.

Although Ruh's formal architectural education was limited, while in Alberta he designed and supervised the construction of 5 churches, a monastery, and gardens for the Faryna family at Radway. In 1924 he was moved to the town of Mountain Road, Man. It was about this time that he changed the spelling of his name to make it more in keeping with his adopted culture. Through the 1920s he designed many churches, including the Mountain Road Church of St. Mary's, the largest wooden church in Western Canada (burnt 1966); the Church of the Blessed Mary Virgin, Portage la Prairie (built 1929 and demolished 1983); the Holy Ascension in Winnipegosis (1929); and St Basil the Great in Regina (1928).

In 1930 Father Ruh was assigned to Cook's Creek, Man, where he remained to complete his double vocation as priest and as architect. It was in 1930 that he began to design and oversee the construction of the Church of the Immaculate Conception, a monument which was not finally completed until 1952. In 1941, in the middle of the long construction period, he was promoted to the position of monseigneur. The grotto and calvary adjacent to the church itself were begun in 1954 and were still incomplete at his death in 1962.

Father Ruh applied his skills and energies to many other churches during the long construction period at Cook's Creek. During the last 30 years of his life he designed many great churches in towns and cities across Ontario and western Canada. St Josophat's in Edmonton (c 1942) is one remaining example of his work. Churches were also designed for Dauphin, Saskatoon and Grimsby, Ont.

Father Ruh was one of the greatest church builders of Canada. Adapting the plans he brought with him to his adopted land, he achieved an often stimulating fusion of the grand style and the vernacular. At least 40 of the buildings he designed across western Canada remain as his legacy.