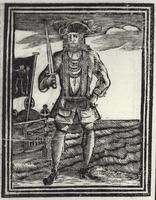 History of Piracy in Canada

In 1612, Peter Easton, an English pirate, embarked on a series of raids on English, French and Portuguese fishing fleets in Newfoundland harbours from Trinity Bay to Ferryland. He inflicted little injury but caused an estimated £20,400 damage.

In June 1720, Bartholomew Roberts attacked Trepassey, Newfoundland. Roberts was the most successful corsair during piracy's Golden Age. He captured 22 merchant ships and 4 vessels, and sank a few fishing boats. Proceeding to the Grand Banks, he captured 6 French vessels. Roberts, who during his four-year career captured 400 ships, was apprehended in 1722 by ships of the Royal Navy off West Africa.

Much of Canada's piracy centers on tales of buried booty. A fabulous treasure ascribed to William Kidd (hanged in 1701) is reputed to be buried on Oak Island, off Nova Scotia's south shore.

Halifax has been the site of two piracy trials. In 1809, Edward and Margaret Jordan and a sailor named Kelly were tried for seizing the Three Sisters and for murdering a number of the crew. The vessel's master, John Stairs, threw himself overboard on a hatch cover upon which he floated four hours before being picked up by an American fisherman. Margaret and Kelly were acquitted, but Edward Jordan was found guilty of murder and piracy and was hanged on 23 November 1809. His tarred and chained corpse was gibbeted at the entrance to Halifax Harbour.

In 1843, Captain George Fielding and his son sought passage home to England from Peru. Sailing from Valparaiso on the barque Saladin, Fielding successfully persuaded some crew members to seize the vessel and murder six shipmates. Under Fielding's command, the Saladin, with a valuable cargo of guano, copper and silver, a chest of dollars and several money letters, set course for Newfoundland. So terrified of Fielding were his fellow conspirators that they threw him and his son into the sea. The Saladin went aground near Country Harbour, Nova Scotia. The crew members were charged with piracy, a charge that was later changed to murder. Two were acquitted because they had not taken part in the murders and were deemed by the court to have been unwilling partners in the death of the Fieldings. The other four were hanged on 30 July 1844 on a knoll where Victoria General Hospital now stands.

In more recent years, Canada has experienced a limited number of incidents of hijacking or sky piracy. On 29 November 1974, Naim Djemal hijacked an aircraft over Saskatchewan. He assaulted a stewardess and ordered the pilot to fly to Cyprus. Upon landing for fuel in Saskatoon, Djemal handed a knife to the captain, and then walked off the aircraft and was subsequently arrested, tried and found guilty. (See also 9/11 and Canada.)