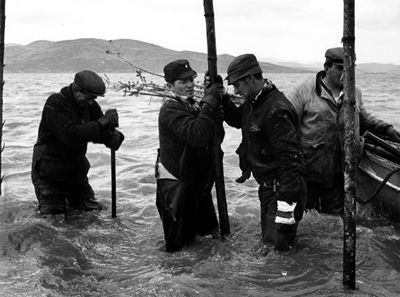 After pitching the National Film Board (NFB) an idea for a scripted docudrama about a beluga hunt by the people of Île aux Coudres, director Pierre Perrault was introduced to cinematographer Michel Brault, who suggested filming it in the direct cinema documentary style that he had been pioneering at the NFB since the late 1950s. The result was Pour la suite du monde, made with a budget of $80,000.

For centuries, the inhabitants of Île aux Coudres, on a small island in the St. Lawrence River near Québec City, trapped beluga whales by sinking a weir of saplings into the offshore mud at low tide. The practice was abandoned in 1940. In 1962, a team of filmmakers led by Perrault and Brault arrived on the island to make a documentary about the people and their isolated life, and they encouraged the islanders to revive the practice of beluga fishing.

The resulting film, photographed with incredible sensitivity by Brault, yielded some stunning imagery. It was hugely popular when it was released in Québec and was met with glowing critical reviews. The original French version ran 105 minutes and was shortened to 83 minutes in its English version, which is variously known as Moontrap; Of Whales, the Moon and Men; and For the Continuation of the World.

Pour la suite du monde represented a major development in the direct-cinema movement, moving away from simple observation to a more immediate participation and a greater emphasis on the words of the people portrayed. It won the Canadian Film Award for Film of the Year in 1964 and was also given a Special Award in recognition of its visual qualities, perceptions and artistry.

The film has come to be regarded as a classic of Canadian cinema. It has been extensively discussed and analyzed, and is consistently ranked by critics as one of the best Canadian films ever made. It was named one of the Top 10 Canadian films of all time in a poll conducted by the Toronto International Film Festival in 1984. In 1996, it was one of 10 films honoured with postage stamps by Canada Post to commemorate 100 years of cinema in Canada.

In 2008, Pour la suite du monde became the first Québec film to be designated a “masterpiece” by the Québec news agency Médiafilm. In 2012, Brault travelled to Île aux Coudres to celebrate the 50th anniversary of the film with the descendants of its subjects. In October 2016, Pour la suite du monde was named one of 150 essential works in Canadian cinema history in a poll of 200 media professionals conducted by TIFF, Library and Archives Canada, the Cinémathèque québécoise and The Cinematheque in Vancouver in anticipation of the Canada 150 celebrations in 2017.