Qausuittuq National Park encompasses 11,000 km2 on northern Bathurst Island and smaller surrounding islands in Nunavut. It also includes the waters of May Inlet and Young Inlet. Pronounced Kow-soo-ee-took, the name of this park translates to “the place where the sun doesn’t rise” in Inuktitut. It is bordered to the south by Polar Bear Pass National Wildlife Area, and together these two zones protect a large, ecologically intact area in the Canadian Arctic Archipelago. Qausuittuq was established on 1 September 2015 as Canada’s 45th national park. It represents the Western High Arctic Natural Region, the 38th natural region of the 39 that constitute Canada’s national parks system.

The terrain of Qausuittuq National Park varies from wetlands and lowlands to plateaux, bluffs and hills. Prehistoric glaciation shaped the surface of Bathurst Island. Moving across the land, glaciers deposited layers of sedimentary rock including limestone, sandstone and dolomite. The landforms they left behind include moraines, eskers and raised beaches (i.e., former beaches that are now above sea level). 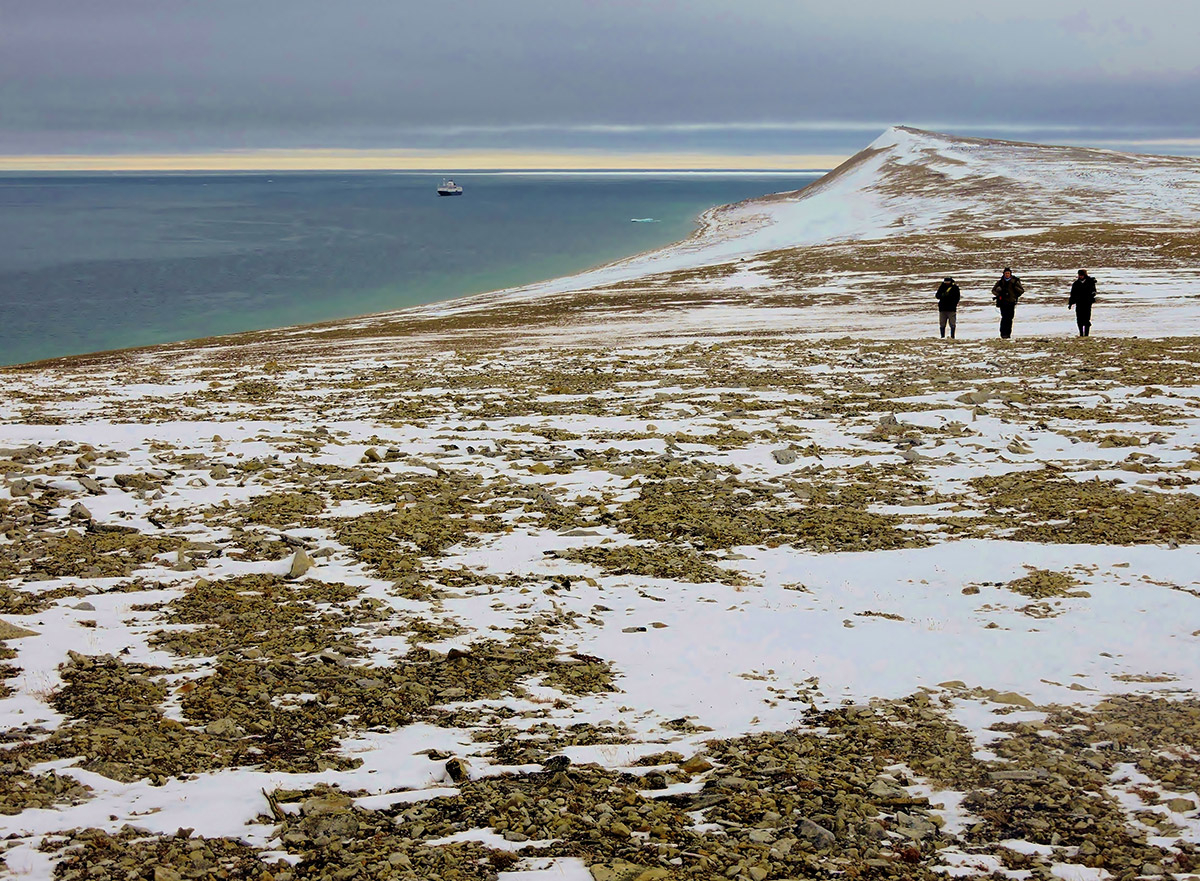 The climate of Bathurst Island is among the coldest and driest on Earth. The temperature averages -32˚ C in January, while July sees an average of just 5˚ C. Snow can fall in midsummer. Over much of the island’s tundra landscape, there is no vegetation at all (see also Vegetation Regions). Where vegetation does grow, it is commonly found on an irregular surface of small hummocks. In wet areas, it consists of thick mats of lichens, mosses, grass, sedges and herbs such as yellow arctic poppies. Purple saxifrage, a hardy, edible flower, is one of the first to appear in spring. The territorial flower of Nunavut and a common tundra herb, it grows low to the ground where it is less likely to be damaged by wind. The only tree that can survive in Qausuittuq is the arctic willow, whose branchestwist along the ground.

Despite its harsh conditions, Qausuittuq harbours diverse wildlife and is among the most pristine places left on the planet. Muskoxen roam the interior of Bathurst Island . A main reason the park was established was to protect critical calving grounds and winter habitat for the endangered Peary caribou, the smallest subspecies of caribou in Canada. Recent studies indicate that populations of muskoxen and Peary caribou are on the rise. Predators in the park include small populations of arctic wolves and arctic foxes.

In contrast to the extreme conditions for life on land, the Arctic Ocean is an environment in which many species thrive. The ringed seal and the bearded seal, respectively the most populous and the largest seals in the Arctic, inhabit the waters off Bathurst Island. Walrus, narwhal and the massive bowhead whale,which can live as long as 200 years, are also found in the area.

Bird life is abundant, at least in the brief summer. The rich sea life supports sea birds such as gulls and jaegers.The wet sedge meadows are nesting grounds for snow geese and shorebirds. Just north of the park is Seymour Island MigratoryBird Sanctuary, which protects the largest known colony in Canada of the rare ivory gull.

A bowhead whale surfaces from a dive in Lancaster Sound, Nunavut.\r\n
PreviousNext

Traces left by the Thule Inuit, Pre-Dorset and Dorset peoples dating back 4,500 years have been found on Bathurst Island, primarily to the south and the east of the park. Archeologists have made discoveries related to the Late Dorset (c. 500­–1200 BCE) near Bracebridge Inlet in the southern part of Qausuittuq.

In the 20th century, explorers sought to establish Canadian Arctic sovereignty and conducted geographical, geological, hydrological and biological research.Most recently, exploration in the area has focused on finding resources such as oil, gas and minerals.

In the 1950s, the Canadian government forcibly relocated 87 Inuit about 2,000 km from Inukjuak, in northern Quebec, and from Pond Inlet, on northern Baffin Island, to Resolute and Grise Fiord. These new communities became Canada’s most northerly settlements. The Inuit had to adapt to a much colder climate, unfamiliar terrain and few resources for survival. They named their new High Arctic home Qausuittuq (“the place where the sun doesn’t rise”), because they had to endure 24 hours of darkness during the winter (see also Arctic Circle). Eventually, they discovered marine and terrestrial hunting areas that became key to their survival, including rich caribou hunting on nearby Bathurst Island.

Creation of the Park

A national park on Bathurst Island was first proposed in 1994. Talks began that year between the Canadian government and the Resolute Hunters and Trappers Organization. Feasibilitystudies and negotiations continued until 2015, when an Inuit Impact and Benefit Agreement was signed between the federal government and the Qikiqtani Inuit Association (whichrepresents Inuit communities in the Baffin region). On 1 September 2015, Qausuittuq was established as Canada’s45th national park. The first tourists arrived in July 2016, and the official opening ceremony took place in Resolute in August 2017.

Qausuittuq National Park is co-operatively managed by Parks Canada and the Qikiqtani Inuit Association. A central feature of the agreement between these parties is the protectionof the park’s cultural heritage and ecosystems. In all management decisions, it is recognized that Inuit are anintegral part of these ecosystems. They retain the right to use the park, harvest wildlife within its boundaries and remove carving stone found there, as well as participate in all facets of its management.

While no visitor facilities had been established as of 2018, visitors are encouraged. The terrain is rough — either dry, broken rock, or wet, muddy meadows — and no trails are marked. Access is by chartered aircraft, boat, snowmobile or dogsled from the community of Resolute, where Parks Canada plans to build a visitor centre and park office.