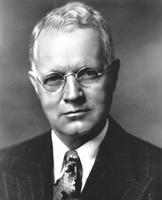 Manion's attempts to reconcile the Conservative Party to Québec only angered many in the party. He was leader 1938-40 (courtesy Library and Archives Canada).

Robert James Manion, politician, physician (b at Pembroke, Ont 19 Nov 1881; d at Ottawa 2 July 1943). After receiving a medical degree at Trinity College (Toronto) in 1904, Manion continued training in Edinburgh until 1906, then returned to Fort William, Ontario, where he was elected alderman 1913-14. He became military surgeon with French forces during WWI, later joined the 21st Canadian Battalion and was decorated for heroism at VIMY RIDGE. He was elected MP for Fort William in 1917 as a Liberal-Unionist, and re-elected as a Conservative in every general election until 1935 when he lost the seat. His longest Cabinet posting was as minister of railways and canals, 1930-35, under PM R.B. Bennett. In July 1938 he was elected leader of the Conservative Party in the hope that his Roman Catholicism and French Canadian marriage would win Québec votes. Manion won a by-election in London later that year and opposed CONSCRIPTION after WWII broke out. The defeat of Premier Duplessis in October 1939 deprived Manion of an effective entrée in Québec. This, combined with hostility from hard-line Toronto Tories over his nonconscription policy, contributed to the party's poor showing in the March 1940 election. He lost his own seat and resigned his party leadership in May of that year.