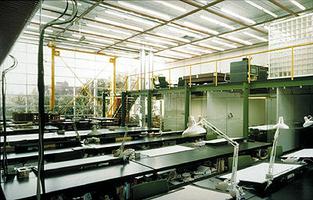 Ronald Keenberg, architect (b at Winnipeg, Man 30 Dec 1941). The only remaining original principal of the architectural firm IKOY (founded 1968), Keenberg received his BFA from the Pratt Institute in 1965. In addition to Keenberg, founding partners of IKOY included Roy Izen (who left the firm in 1970), Stan Osaka (who left in 1977) and Jim Yamashita, who stayed with the firm until 1993.

Keenberg, while remaining engaged in a great number of interesting projects, completed a M Arch from the University of Manitoba in 1989. Often seen as a "progressive" architect, his approach to a building, which is to attempt to realize its social purpose by resolving a set of constructive and environmental systems within an economic framework, is fundamentally "radical conservative." This approach to design and building can also be found in the work of Mies van der Rohe and Frank Lloyd Wright.

While Keenberg's work during the 1970s might be categorized as "high tech" (then the fashion), subsequent buildings have upheld the principle that an excellent building is one beautifully built, whatever the materials. Favourable comparison could be made to the work of architects Norman Foster in England or the Europeans Piano and Rogers. The most significant buildings designed by Keenburg following the departure of his original partners are the Harbourview Recreation centre (1982), the Auto/Diesel Shop at the Red River Community College (1984), the RCMP Forensic Labs (1987), the Wallace Geological Sciences building at the University of Manitoba (1988), all at Winnipeg; the William Davis Computer Research Centre at the University of Waterloo (1988); the Canadian Forces Base Maintenance Facility, Shilo, Manitoba (1996); and the National Archives in Ottawa (1996). Perhaps it is appropriate that his major commission to date should be for a literally conservative institution, the National Archives, a beautiful container to house national treasures to perpetuity.