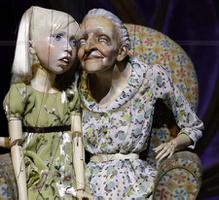 Ronnie Burkett, puppeteer, playwright, performer, designer (born at Lethbridge 10 June 1957). Ronnie Burkett is acclaimed around the world for his dazzling theatrical productions featuring marionettes of his own design and creation. His performances have entertained and delighted adult audiences since the 1970s when he began his career with a one-man street theatre show (featuring a "bag stage" that he actually wore) titled Plight of Polly Pureheart, which he performed more than 1200 times in schools, community centres, night clubs, malls and on Armed Forces tours.

Burkett spent his formative years in Medicine Hat. At 7 years old, he first read about puppets in the World Book Encyclopedia. Early influences were Bil Baird (featured in the WBE), whose puppets in "The Lonely Goatherd" in The Sound of Music set Burkett's determination to become a puppeteer. He claims his first "real" show was a handpuppet musical titled The Patchwork Girl of Oz, which he wrote and began touring at age 14. He attended Medicine Hat College for 1 year and was awarded a scholarship as a theatre major to Brigham Young University in Utah. He left after a semester; his training was to be more practical and hands-on than academic or theoretical.

Ronnie Burkett's chief mentor was Martin Stevens, through whose influence (initially through a correspondence course of puppetry) Burkett would form the basis for his technique in the areas of marionette construction, writing and vocal work. His significant Canadian mentor was Noreen Young of Ottawa, known for her CBC program of that time, Hi Diddle Day.

In 1976 Burkett attended an international puppet festival in Moscow, where his early mentor Bil Baird invited him to New York to audition for Baird's permanent puppet theatre. Burkett joined the company that was to last for only a year and then, still in New York, built many of the puppets for the PBS production of Cinderabbit, winning an Emmy Award in 1979. He returned to Alberta in 1980 and founded a TV puppet company doing industrial work, TV commercials and children's programs. He performed Polly Pureheart at the first Edmonton Fringe Festival in 1982.

In 1986 he started Ronnie Burkett Theatre of Marionettes. The first show was titled Fool's Edge - a naughty commedia dell'arte musical - by Calgarian Blake Brooker of the ONE YELLOW RABBIT Theatre Ensemble. Fool's Edge premiered at Calgary's ALBERTA THEATRE PROJECTS in 1986 and went on to the Edmonton Fringe, the Winnipeg Fringe, Workshop West (Edmonton), One Yellow Rabbit (Calgary), FACTORY THEATRE (Toronto) and the duMaurier World Stage (Toronto). Burkett refers to this time as his "bad boy of puppetry phase."

His play Tinka's New Dress (MANITOBA THEATRE CENTRE, 1994) featured more naturalistic marionettes, through which Burkett began exploring construction, movement and marionette control in more depth. The show toured internationally for 8 years and was the basis for his considerable international reputation. Tinka's New Dress is the first play of The Memory Dress Trilogy, and was followed by Street of Blood (Manitoba Theatre Centre, 1998) and Happy (DuMaurier World Stage, 2006).

Provenance, a play about beauty and the artistic movements of the 20th century, premiered at Edmonton's Theatre Network in 2003 and toured internationally. This was followed in 2006 by 10 Days on Earth for Canadian Stage; it is Burkett's favourite play of his own oeuvre. It depicts a week and a half in the life of a mentally challenged man who doesn't know his mother has died. The show's title comes from the 10 days between Burkett's own birth and adoption when he was "alone on earth." It also toured internationally. Billy Twinkle: Requiem for a Golden Boy followed in 2008, premiering at Edmonton's CITADEL THEATRE and touring internationally. Penny Plain, set in a rooming house, depicting the last 3 days of civilization, premiered in 2011 at the Citadel Theatre. The 2011/12 Canadian tour of this play marked the 25th anniversary season of Ronnie Burkett Theatre of Marionettes.

Ronnie Burkett is one of the most respected theatre artists in Canadian history, yet when asked about career highlights he is more likely to comment on places he has been than specific awards he has won. These places include 5 West End runs in London, runs at the Sydney Opera House and the Vienna Festival, and playing old jewel theatres around the world. His performances have established box office records at Canadian Stage, Theatre Network and the Vancouver East Cultural Centre.

As a teenager, Burkett attended his first Puppeteers of America Festival in Michigan in 1973. Years later at the same festival he was awarded its 2001 President's Medal for Outstanding Contributions to Puppetry. He has won virtually every significant theatre award in cities across Canada and throughout the world.

Two of the most notable awards Burkett has won are an OBIE (Off Broadway theatre award) in New York in 1999 and the SIMINOVITCH AWARD in Canada (for design) in 2009. When pressed on the matter, he says: "I'm sure there's a whole bunch of highlights, but seriously, I'm just happiest when I have a full theatre of adults who show up and watch and listen to my marionettes. I am still amazed and delighted by that the most."

Ronnie Burkett is a remarkably prolific writer, designer and performer, creating original and innovative new work at a breathtaking pace.