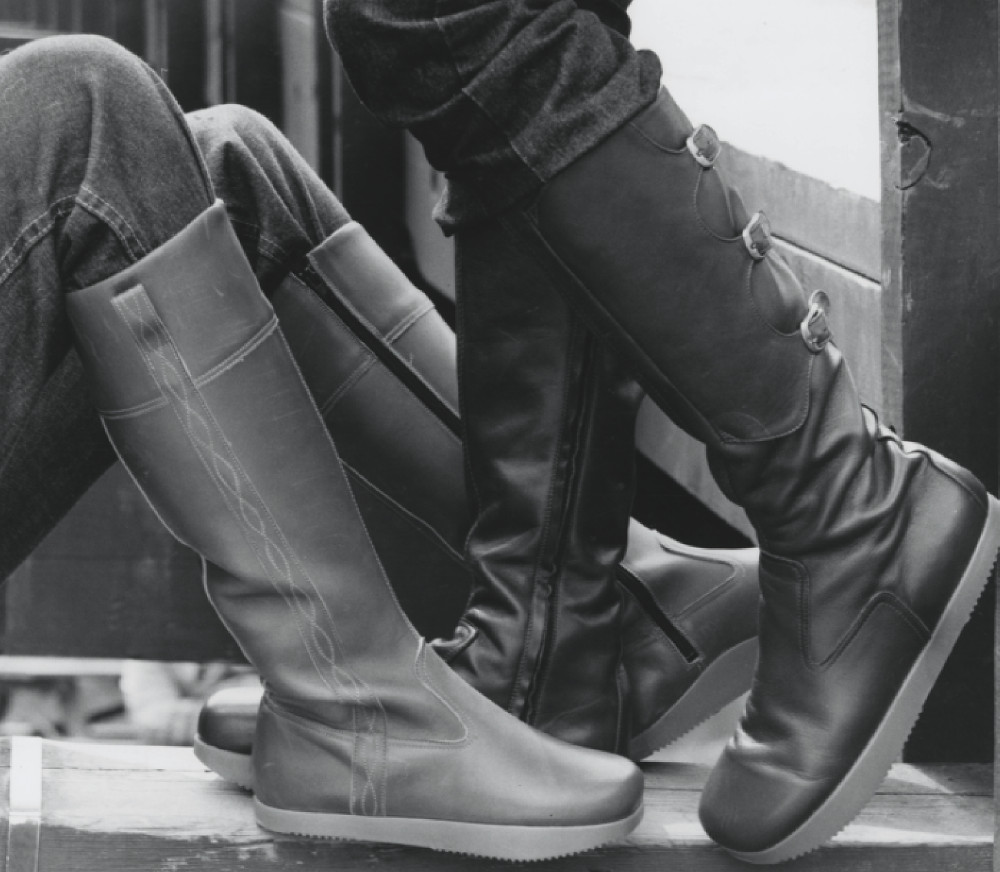 With the rise of practical fashion in the early 1970s, Budman and Green saw an opportunity in a comfort-over-style shoe known as the “negative heel.” The original design was created by Anne Kalsø, a Danish yoga instructor and founder of Earth Brands shoes (see Footwear Industry).

The product aimed to improve posture while reducing back strain through soles thinner at the heel than at the front of the shoe. Budman and Green’s version of Kalsø’s shoe featured a less pronounced incline in the sole and an athletic upper design. 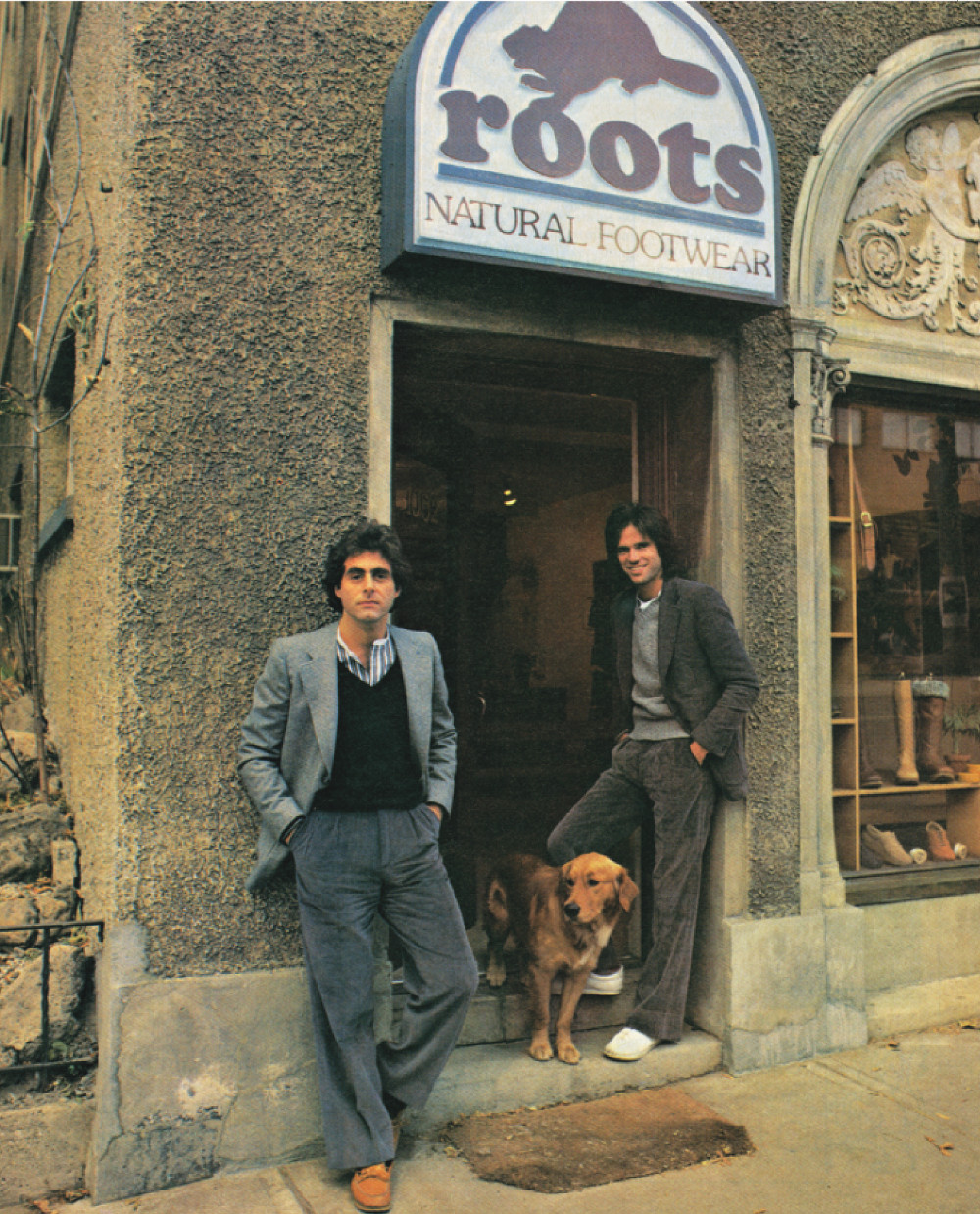 The two Americans partnered with the Boa Shoe Company, a small family-run business located on College Street in Toronto (see Small Business). In 1973, Boa completed the first order of 120 pairs of “Roots Shoes.” The young entrepreneurs then rented an 800-square-foot space on Yonge Street north of the Rosedale subway station, opening their first store on 15 August 1973.

To mark Roots’s new venture, Toronto designers Robert Burns and Heather Cooper collaborated with the company to create the now iconic beaver logo. By 1975, the Roots negative heel shoes had gained immense popularity among Canadians and Americans, including a growing list of celebrities. Shoe production reached a high of 2,000 pairs per week. Roots had become one of the nation’s leading retailers, with 75 stores established by 1975. 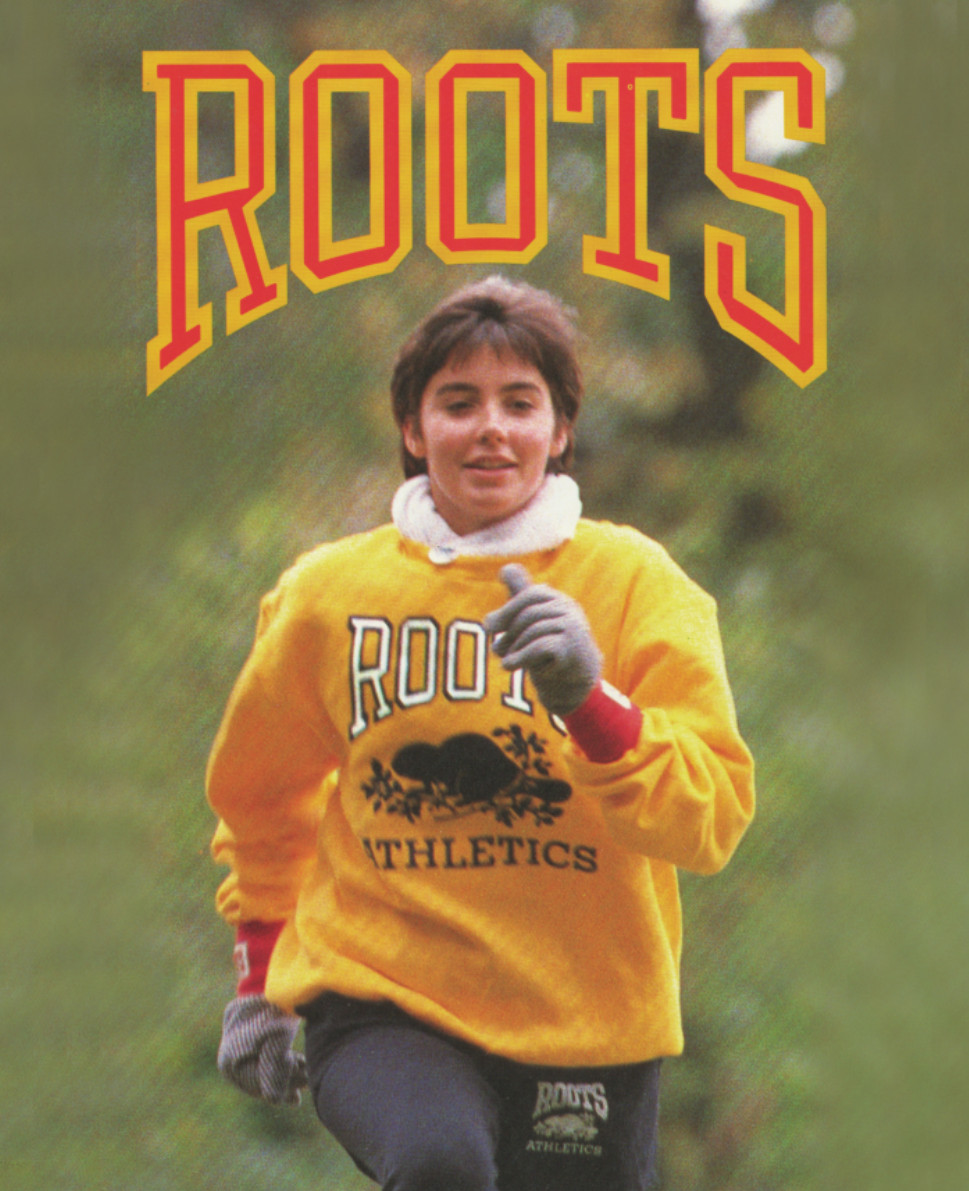 Recognizing the volatility of a trend-driven business, the Roots team sought stability with new ventures that would secure steady sales and valuable publicity. While trying to break into the American market, the retail firm faced a trademark infringement suit from a New Jersey retail company with the same name in 1979.

District records show that the court ruled in favour of Roots Canada because of its high sales volume and national advertising campaigns — efforts that surpassed the New Jersey version of the brand. The American Roots was considered primarily a local clothier, as court records noted that its advertising campaigns were mainly targeted at the New Jersey market. Its traction outside of New Jersey was small in comparison to what the Canadian retailer had achieved to that date.

Despite winning the case, the suit stalled Roots’s entry into the US. However, with patience and planning, Roots re-entered America in 1988 and maintained steady growth throughout the economic recession. Its traditional apparel and nostalgic designs, like the “Roots Beaver Athletics” sweatshirt, resonated with consumers across North America. 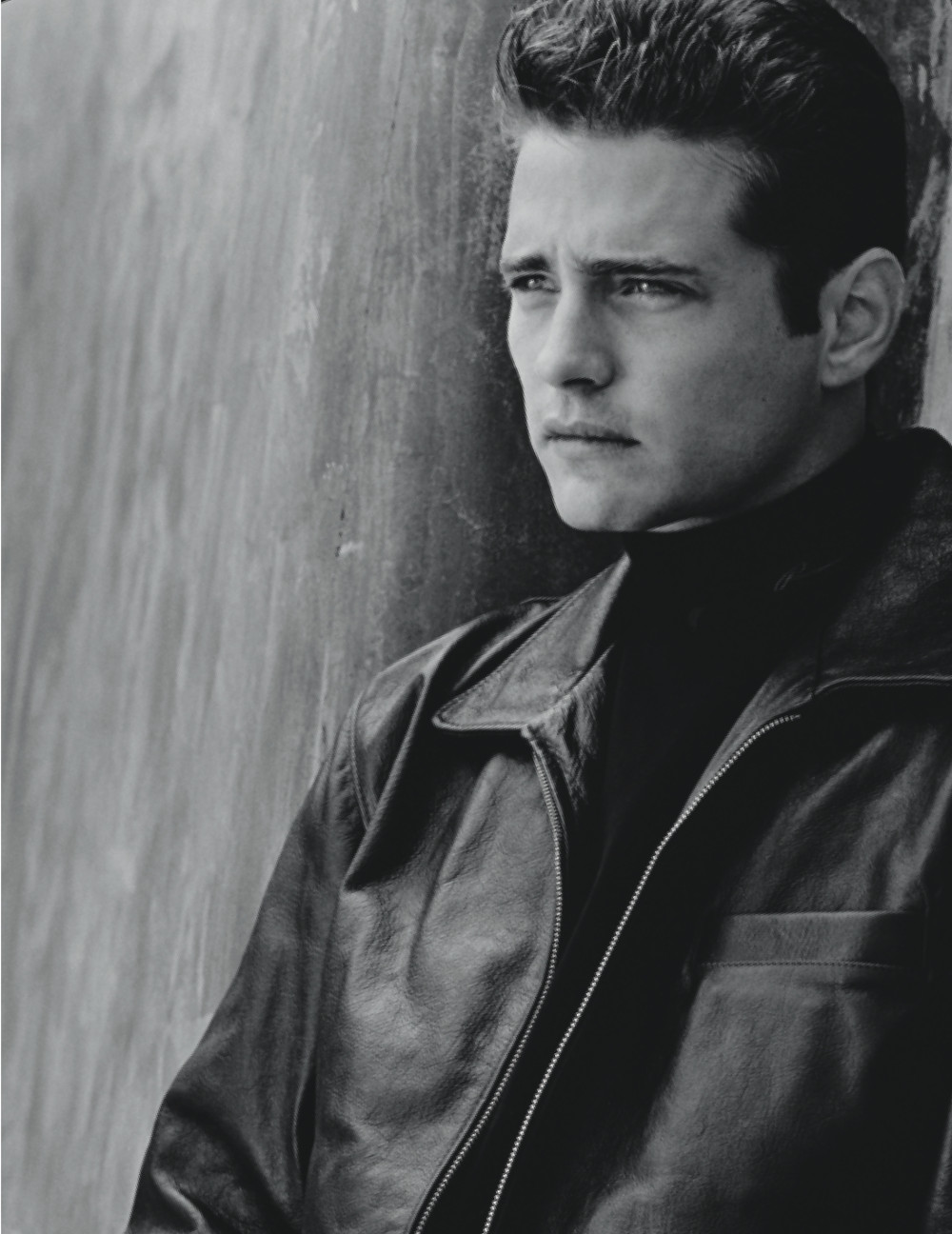 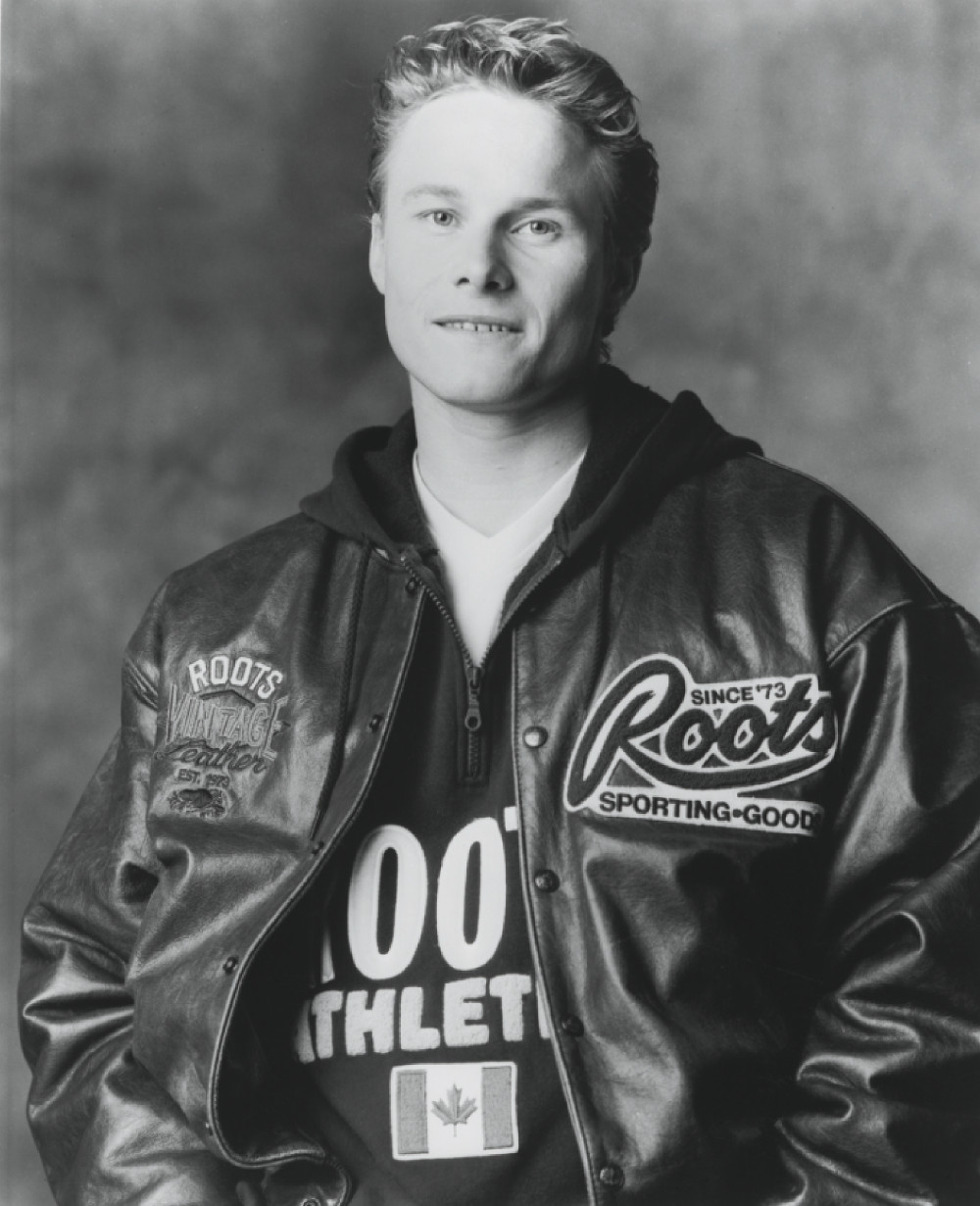 One of Roots’s most effective strategies was using celebrity power to market its products. Brand strategist Bruce Philp once handled advertising for Roots, and discovered in a brand revamp in 1996 that shoppers associated the company’s products with “quality” and “summer camp.” Fans of Roots apparel felt it was a “great leveller,” as anyone from banking executives to tradespeople could wear the clothes on the weekend. Philp’s campaigns featured celebrities, such as actor Jason Priestley, wearing Roots apparel.

Instead of paying endorsement fees to celebrities, the Roots founders leveraged their long-time connections by passing out free sets of clothing when they felt an individual or group would be representative of its brand. For example, Budman and Green would follow their friends John Candy and Dan Aykroyd to Hollywood and bring armloads of clothes with them to give out.

While athletes Elvis Stojko and Ross Rebagliati were paid to wear Roots clothing, actors such as Matt Damon and Ben Affleck took part in a Roots leather photoshoot during the filming of Good Will Hunting in 1997. Industry insiders pointed out that celebrities were willing to do such ads because they had a relationship with the Roots founders and liked the free clothes. Former US president Bill Clinton and ex–Canadian Prime Minister Jean Chrétien have also been spotted wearing Roots leather jackets.

Over the years, Roots’s celebrity marketing strategy has continued. In 2010, the company signed a creative partnership with novelist and artist Douglas Coupland to release a collection of clothing and accessories. Coupland himself designed the line, which included leather goods, accessories and apparel. In 2011, the company teamed up with Canadian rapper Drake to develop signature varsity jackets for his OVO clothing label. The collaboration continued into 2015, fuelled by the close friendship between Drake and Budman’s son, Matthew. 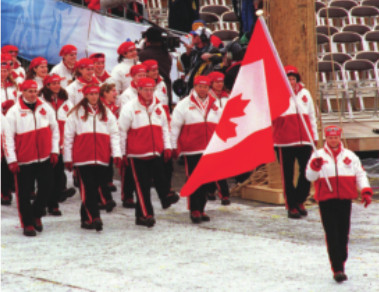 Canadian Olympic Team at the opening ceremony in Nagano, Japan, 1998.

In 1998, during the Nagano Olympic Winter Games, Roots outfitted Canadian athletes with its “poorboy cap” design. The hat became so popular that it was seen on celebrities worldwide, including Prince William, Céline Dion and Spike Lee. The style’s success sparked a long-standing relationship between the brand and the games.

Following the 1998 Games, Roots dressed Team Canada in 2000, 2002 and 2004, the United States in 2002, 2004 and 2006, and Great Britain and Barbados in 2004. The relationship between Roots and the Olympics began to fray when Roots lost out to the Hudson’s Bay Company on a contract to dress the Canadian team for the 2006 Turin Games in Italy. Roots hasn’t outfitted the Canadian team since.

Clothing Made in Canada

Despite most retail companies looking to reduce overhead and have all their products made overseas, the Roots founders took a different approach that combined the cost-efficient strategy of manufacturing in other countries while at the same time running a “made in Canada” operation. Given the brand’s connection with Canada it was important to the founders to have at least some products produced domestically (see Clothing Industries).

By 2013, most Roots’s leather goods and footwear were still made in Canada, although most of its apparel is manufactured in India, China, Peru and Italy. It had more to do with viability than economics, as the Canadian manufacturing industry had slowed down to the point that it just wasn’t possible for large retailers to make everything in Canada. Still, the company seeks to maintain its goal to produce as much as it can domestically, as it believes that its consumers appreciate the idea of locally made goods.

Today, Roots operates a 50,000-square-foot leather factory in uptown Toronto on Caledonia Road, where the company employs 200 artisans who handcraft bags, small leather goods and shoes. The company also uses tanneries in France and Italy, and shoe factories in India and Mexico.

Ahead of US retailer Target’s move into Canada, Roots was selected as one of its Canadian partners with the goal of providing limited collections in the newly opened 124 stores. The partnership between Target and Roots had been a year and a half in the making and gave both retailers an opportunity to tap into a new market. For Target, it would help with its introduction to Canadians and for Roots, it provided an initial foray into a mass merchandising space and the opportunity to align itself with a top American retailer.

Despite being called an iconic brand, Budman felt that the partnership would help the 40-year-old company “stay fresh” and also give Roots access to a wider audience. The Roots Outfitters collection was available at Target between March and June 2013 and featured the Canadian imagery that has become synonymous with Roots, including the beaver, the maple leaf and its logo emblazoned in cursive and block lettering.

Unfortunately, Target’s attempt to enter the Canadian market failed, and CEO Brian Cornell closed all the stores by April 2015. The reasons for its failure included unattractive store locations, understocked stores and competition from Wal-Mart.

After 40 years of running the company, founders Budman and Green decided it was time to think about succession, as they didn’t have plans to pass the business over to their children. In October 2015, Roots announced it would sell a majority stake to private equity firm Searchlight Capital Partners — a company with offices in Toronto, London and New York and investments in M&M Food Market and Hunter Boot, Ltd.

The deal gave Roots the chance to tap into European markets and boost the parts of the business that used to be more lucrative, such as leather shoes and jackets. The terms of the deal put Searchlight in a long-term investment position, with plans to allow the brand to stay true to its Canadian heritage as it marketed itself overseas. The plan was to open more stores both in Canada and internationally, as well as grow Roots’s e-commerce business, which at the time of the acquisition accounted for just 10 per cent of sales.

The amount that Searchlight paid was undisclosed. Budman and Green remain at the forefront of the company as prominent shareholders. On 25 October 2017, Roots made an initial public offering (IPO) — it’s first sale of stock — on the Toronto Stock Exchange, trading under the symbol ROOT (see also Stock and Bond Markets).

International Expansion and the China Market 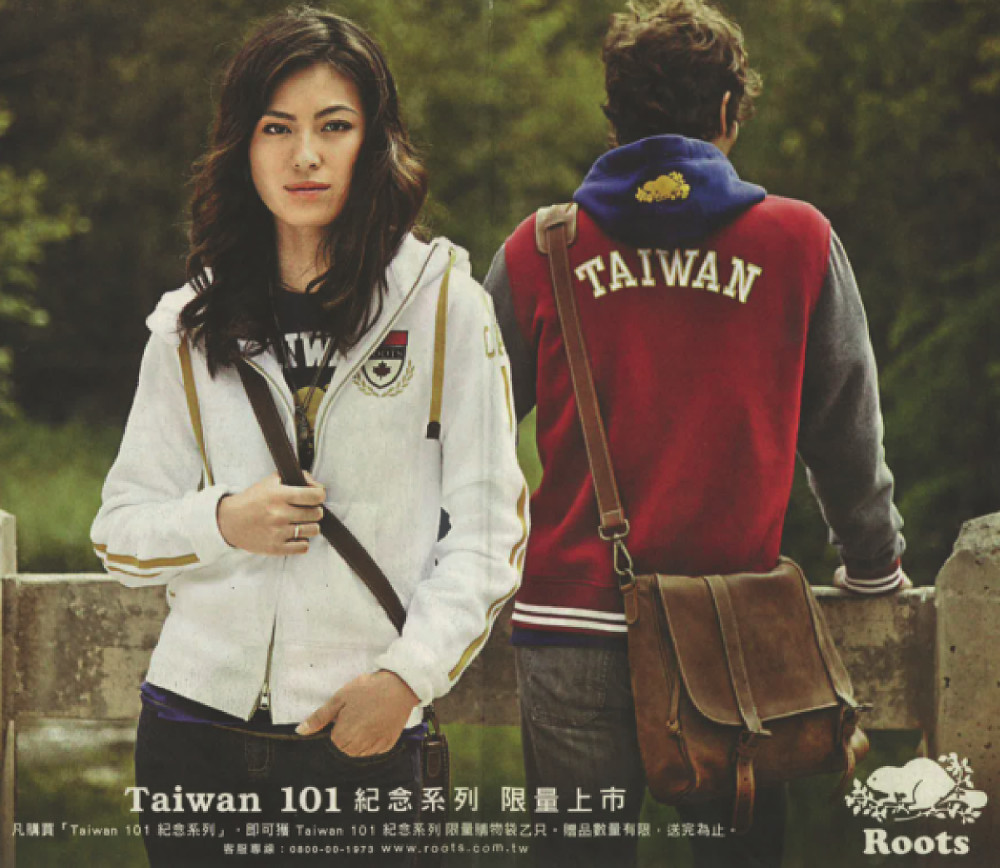 Since its sale to Searchlight Capital Partners, Roots’s strategy has been ardently focused on international expansion. When the company became public in 2017, it had more stores in Asia than it did in North America: 116 in Canada, 4 in the United States and 136 in Asia. Taiwan is its most established overseas market as it has opened 109 stores over the past 20 years.

The company also ran an international ad campaign in early 2016, celebrating its 20th anniversary in Taiwan, in a co-marketing partnership with the island nation’s tourism board. The Mengjia Longshan Temple in Taipei, for example, was featured in Roots’s ads as one of the island’s key tourist destinations.

In the past, Roots has teamed up with tourism boards across Canada to promote a number of locations, including Banff and Lake Louise. The deal with the Taiwan tourism board marked its first tourism board partnership outside of Canada.

Today, Budman and Green are still at the forefront of Roots’s brand strategy, having joined Searchlight founding partners Erol Uzumeri and Eric Zinterhofer on a trip to Taiwan and China in January 2016. The company’s immediate focus for Asia is to grow its stores in the China market, which as of 2016 had 23 stores. 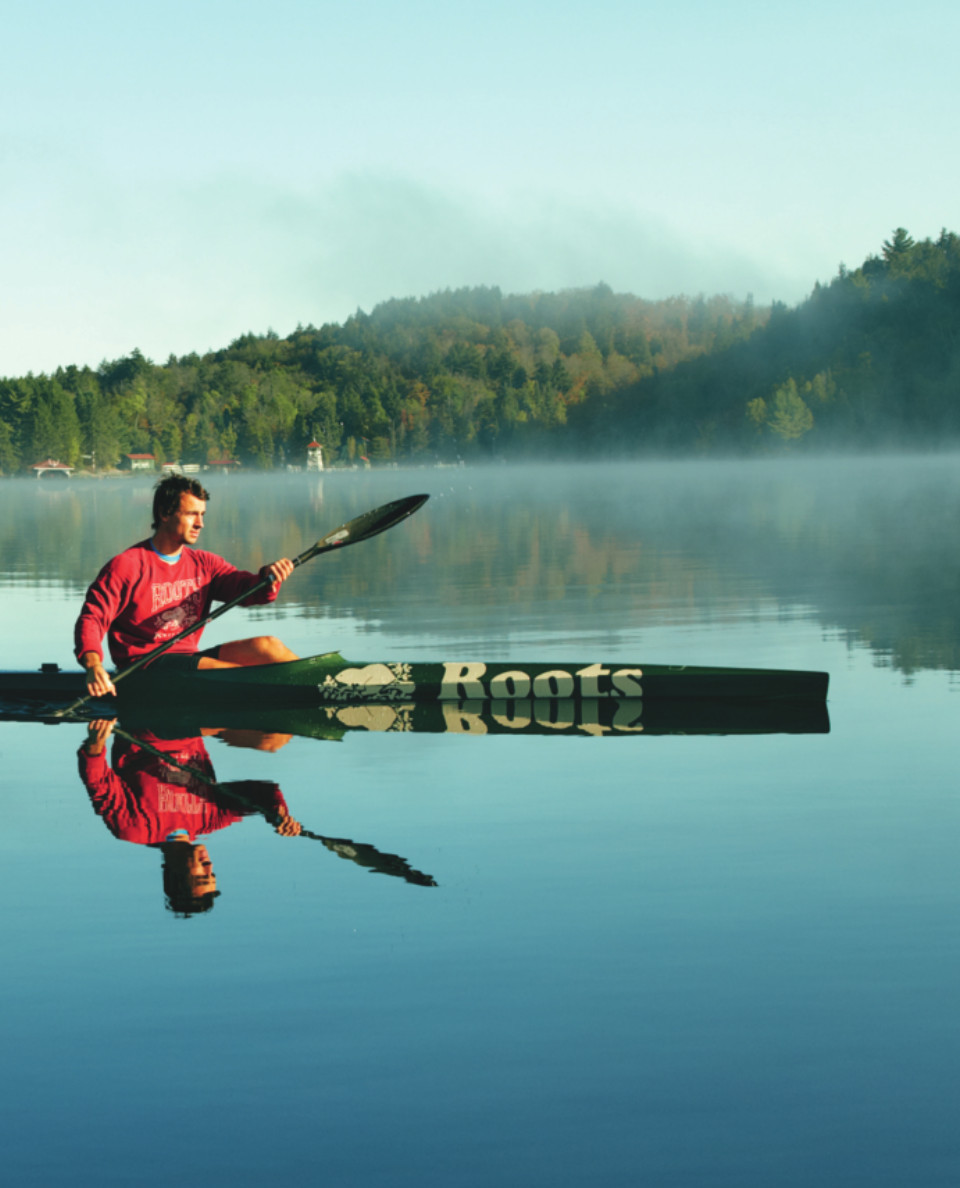 From the beginning, Roots established itself as a local company with strong ties to Canada. The country’s great outdoors, culture, sports and diversity were considered sources of inspiration for its products.

From the beaver featured on its logo to its birthplace in Toronto, Roots built its brand on the foundation of its Canadian heritage and dedication to grassroots projects. In 2006, Roots opened a yoga studio above its Rosedale neighbourhood store to engage the local fitness and wellness community. The studio was managed by Green’s wife, Denyse, a yoga devotee for over 35 years.

As the company was founded on a shared passion for nature, Roots’s products are synonymous with an athletic, outdoor lifestyle and its merchandise is known for comfort and durability. In November 2011, it announced plans to renovate many of its stores with decor resembling a cozy log cabin.