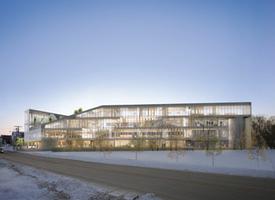 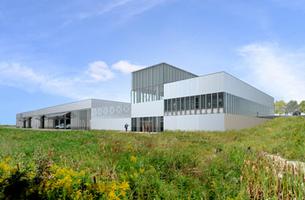 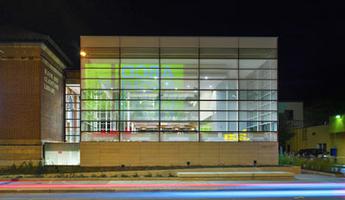 The 2009 renovation for the Bloor/Gladstone branch of the Toronto Public Library received a 2010 Chicago Athenaeum International Architecture Award and a 2010 Ontario Library Association Award for Excellence (courtesy Rounthwaite Dick and Hadley Architects). 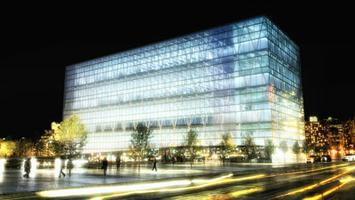 The design for Toronto's Port Lands Sports Complex, billed as the first of its kind in the world, features 4 hockey rinks stacked atop one another and sheathed in an all-glass façade (courtesy Rounthwaite Dick and Hadley Architects).
PreviousNext

Rounthwaite, Dick & Hadley Architects & Engineers (RDH), architectural firm founded by F.H. MARANI in 1919. In its early days the practice designed a wide range of private residences in Ontario and Québec as well as independent schools and colleges, including St Andrew's College, Aurora, Ont; the Lower School, Ridley College, St Catharines, Ont; and Prince of Wales College, Charlottetown. Joined in partnership by R.S. Morris in 1930, Marani & Morris designed the North American Life Building at the St George Street Medical Arts Building, Toronto, and the new Bank of Canada Head Office in Ottawa. After war service, the partnership was expanded to include M.F. Allan and later R.A. Dick.

During the postwar period Marani Morris & Allan, as the firm became known, designed numerous well-known insurance buildings, notably Manufacturers Life, Crown Life and Confederation Life in Toronto; Metropolitan Life in Ottawa; and Great-West Life in Winnipeg; banks, including the Bank of Canada in Ottawa, and the Royal Bank of Canada in Toronto; and public buildings, including Metropolitan Toronto Court House, and the military component of the Canadian Embassy, Washington, DC. In 1958, Morris was awarded the Royal Gold Medal for Architecture, bringing international recognition to the firm. He was only the second Canadian to be so honoured (the first was Frank Darling in 1915).

In 1964 the partnership merged with C.F.T. Rounthwaite (co-recipient of the Massey Foundation Gold Medal for the design of the STRATFORD FESTIVAL Theatre in 1958) to form the firm of Marani Rounthwaite & Dick. In 1972 the practice was entrusted with the extension of the head office of the Bank of Canada in Ottawa in a joint venture with Arthur ERICKSON. Following Marani's death, and upon G.R. Hadley joining the partnership, the firm's name was changed to Rounthwaite, Dick & Hadley. Projects from this period included the new head office of Metropolitan Life and the Metropolitan Centre, the Bank of Canada support centre (all in Ottawa), and Mutual Life in Waterloo. The Crown Life headquarters constructed in Toronto in 1954, with an addition of equal size constructed in the 1970s followed by a retrofit of the original building in 1985, demonstrates the firm's low-key, conservative approach to design.

RDH's more recent corporate work has taken it into more adventurous design territory. First Leaside Financial in Uxbridge, Ont, a striking 40 000-square-foot suburban office development that combines unusual massing clad in glass, is projected to achieve LEED Platinum status. The building incorporates a number of sustainable initiatives, including abundant natural daylight through the extensive use of glazed curtain wall, solar panel technology, intensive green roofs on 4 levels of terracing structure, natural ventilation on each level, the creation of a biologically active floodplain adjacent to parking, and the use of locally available materials. The building received a 2008 Canadian Architect Award of Excellence.

In addition to maintaining a strong base in office designs, the firm gained a reputation for expertise in designs related to transportation and infrastructure. In 1975, RDH designed the terminus for GO Transit's commuter rail system in Toronto's Union Station. RDH has also designed projects for Via Rail and the Toronto Transit Commission Transit Control Centre. At Pearson International Airport, RDH designed a new Central Utilities Building to supply heating and cooling for the new terminal, as well as a sorting facility for FedEx.

In the 2009 renovation for the Bloor/Gladstone branch of the Toronto Public Library (realized in association with Shoalts & Zaback Architects and ERA Architects), new and old meet and contrast to pleasing effect. The addition, essentially a cube of glass, is given visual interest by means of careful attention to lighting and windows; its interiors are bright and airy, while slender structural supports provide a sense of drama and intrigue. The project has received several significant awards, including a 2010 Chicago Athenaeum International Architecture Award and a 2010 Ontario Library Association Award for Excellence.

Controversy, praise, and publicity greeted RDH's 2010 design for the Port Lands Sports Centre, proposed for the east side of the historic port lands area of Toronto. The design, billed as the first of its kind in the world, features 4 hockey rinks stacked atop one another and sheathed in an all-glass façade. The innovative design resulted after a barrage of criticism of the original concept, which proposed to dispose the rinks in a typical Canadian sprawl. After nearly a century of staying quietly in the background, RDH Architects seems poised to stir up architectural waters.