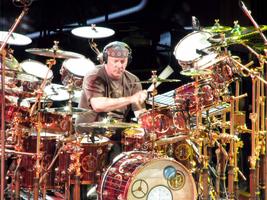 Rush. This rock trio was formed in 1968 in Toronto by the guitarist Alex Lifeson (b Zivojinovich, in Fernie, BC, 27 Aug 1953), the singer, bass guitarist and (later) keyboard player Geddy Lee (b Gary Lee Weinrib, in Toronto, 29 Jul 1953), and the drummer John Rutsey (b 1953, d Toronto 11 May 2008). Initially performing a wide variety of British and US rock cover songs, by 1969-70 the band began to write original songs influenced by the British "proto-heavy metal" band Led Zeppelin. Lee contributed the piercing, high, countertenor vocals that typified Rush's sound from the early 1970s to the early 1980s, and Lifeson contributed a riff-based, though also melodic, electric guitar style.

The trio performed in high school auditoriums and nightclubs in Ontario before recording its self-titled debut album in late 1973 and releasing it in Canada in January of 1974 on the band's own Moon label. Rutsey was replaced by the drummer-lyricist Neil Peart (b Hamilton, Ont, 12 Sep 1952) in time for an album deal with Mercury Records and the trio's first US tour in late 1974. Neil Peart's "semi-literary" fascination with Anglo-American literature (such as literary travelogues and science fiction) included an interest in the individualist writings of Ayn Rand that inspired certain songs from 1975 to 1982. Around the same period, when it co-produced its music with Terry Brown, the trio often fused elements of progressive rock (such as complex time signatures and virtuosity) with its early emphasis on heavy metal, but its adaptive/evolutionary style later involved elements of post-punk, synth-rock, and alternative rock.

From 1974 to 1976, Rush often opened in the US for Kiss, Aerosmith and other hard-rock bands, but by 1975-76 it had started to headline concerts in the US and Canada. By the end of the decade its usual venues were sports arenas and outdoor stadiums - eg, Maple Leaf Gardens, the CNE Grandstand, and their US equivalents (Madison Square Garden, the Nassau County Coliseum, etc). Rush made its first European tour in 1977 (returning in 1981, 1983, 1988, 1992, 2004 and 2007) and also performed in Japan in 1984, in Mexico and Brazil in 2002, and in Puerto Rico in 2008. In its early years, the trio gave more than 200 performances annually (often in smaller venues), but its dozen tours from 1980 to 2004 each consisted of about 70 concerts (in larger venues). The Canadian bands April Wine, Chilliwack, Max Webster, the Pat Travers Band, Streetheart, Payola$, Tom Cochrane and Red Rider, Wrabit, FM, Chalk Circle and Voivod have all served as opening acts for Rush, as have dozens of US and British artists.

The trio's success has come largely through its 30 albums which collectively have sold more than 43 million copies internationally, and through its concerts. The band's best-selling (and, arguably, best) album, Moving Pictures (1981), has sold over four million copies in the US. All three members - Peart in particular - came to be highly regarded for their technical skills, which are given full play in live performance. They also worked on solo projects in the 1990s, and Peart wrote several books, including Ghost Rider: Travels on the Healing Road (2002), after his daughter and spouse died in 1997 and 1998, respectively. The band was moderately successfully as a Top 40 act in Canada, but "New World Man" (1982) was the band's only Top 40 hit in the US. However, many of its songs have enjoyed considerable success on album-oriented rock formats in Canada and the US. Rush is equally known for its extended works (1975-81) - eg, "By-Tor & The Snow Dog," "2112," "Xanadu," "Cygnus X-1," "Hemispheres," the instrumental "La Villa Strangiato," and "Natural Science" - but it moved completely away from the extended format in its new music from 1982 to 2002.

A substantial portion of Rush's "hardcore" fans comprise hundreds of thousands of amateur and professional musicians, ranging from progressive/hard rock drummers, bassists, and keyboardists to classical violinists to death metal guitarists and vocalists. Four Rush tribute albums, reflecting all of these styles, appeared between 1996 and 2005. By comparison, the band has met with, at best, mixed reception among rock critics. Nonetheless, Rush has won numerous music industry awards in Canada, such as Juno Awards for best new band in 1975, and group of the year in 1978 and 1979. Presto (1989) won the inaugural Juno for hard rock/metal album of the year in 1991, followed by Roll the Bones (also for hard rock/metal album) in 1992, and music DVD of the year for Rush in Rio (2004). CRIA identified Rush in 1990 with Bryan Adams and k.d. lang as the "artists of the decade" for the 1980s. The band also played at the post-SARS mega-concert Toronto Rocks (2003) and for the post-tsunami fundraiser Canada for Asia (2005). In 2010 Rush was inducted into the Canadian Songwriters Hall of Fame.

Rush seemed to ride a wave of renewed interest at the dawn of the new decade as the DVD from its successful tour in support of its gold-certified Snakes & Arrows album was nominated for a Juno in 2010, the excellent documentary Rush: Beyond The Lighted Stage won a Juno in 2011 and the Rush: Time Machine 2011: Live in Cleveland DVD received a 2012 nomination. The group toured ambitiously in support of its 2012 Clockwork Angels album, which debuted at number one in Canada and number two in the United States. A novelization of the album by science fiction writer Kevin J. Anderson was published that same year, when Rush also received the Governor General's Performing Arts Award for Lifetime Artistic Achievement. Clockwork Angels went on to win the Rock Album of the Year award at the 2013 Juno Awards in Regina.

Many thought the honour was long overdue, but Rush was finally inducted into the Rock and Roll Hall of Fame in 2013 after selling more than 40 million albums worldwide and performing in front of millions through numerous high-grossing tours. Rush's sales statistics place it third after The Beatles and The Rolling Stones for the most consecutive gold or platinum studio albums by a rock band in the US.