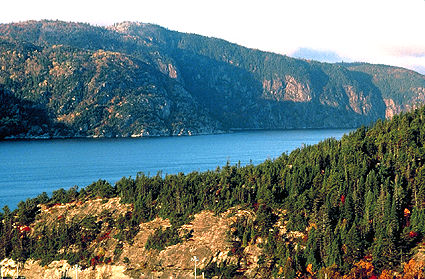 Québec's Saguenay flows through a deep channel in the rock of the Canadian Shield (photo by Jessie Parker).

The Saguenay River, 698 km long to the head of the Péribonca River, issues from lac Saint-Jean in the Laurentian Highlands of Québec. It has a drainage basin of 88 000 km2 and a mean discharge of 1750 m3/s. It discharges from the lake through 2 channels, which join some 10 km from the lake near Alma.

The majesty, power and stark beauty of the river are legendary. From Saint-Fulgence to the St Lawrence River, the river flows through a deep gash in the Precambrian rock, about 2 km wide and over 275 m deep in places, with cliffs rising 500 m above the river. The lower Saguenay is a fjord gouged by the glaciers of the last ice age, 10 000 years ago. As the ice receded, the sea invaded; tidewaters still surge as far as Chicoutimi, rising and falling as much as 6 m at the equinox. It is here the fresh, warm waters of the tributaries float in layers over the cold, salty brine beneath. 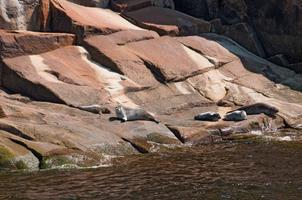 The deep Saguenay waters are the breeding grounds of the beluga and minke whales may be sighted in its depths. The shallower waters at the confluence with the St Lawrence are rich in krill and small fish such as capelin attracting other marine mammals: harbour seal, harbour porpoise, fin and even blue whales. The dramatic scenery of the river, particularly the formidable Cap Trinité (348 m) - on which was built a huge statue of the Virgin Mary in 1881 - and Cap Éternité (352 m) at the mouth of Rivière Éternité, has drawn tourists since the 1850s.

The Saguenay was once the corridor of a trading network extending beyond the height of land to lac Mistassini and beyond to James Bay. Tadoussac, at the confluence with the St Lawrence, was a meeting point of the Algonquian peoples of the shield and the Iroquoian of the St Lawrence Valley. Jacques Cartier visited the river mouth in 1535 and eagerly gathered tales of a rich "Kingdom of Saguenay" in the river's watershed.

The "kingdom" was fantasy, and the journey upriver was not made until Jesuit missionary Jacques Dequen went as far as present-day Chicoutimi in 1647; Father Albanel reached Lac Saint-Jean in 1671-72. Pierre Chauvin established the first trading post in Canada at Tadoussac in 1600, and the river remained an avenue for the fur trade and later the timber trade into the 19th century. Agricultural settlement began in 1838 with the founding of La Baie. Industrialization began with the building of a sawmill at Chicoutimi in 1842; the Chicoutimi pulp mills were opened in 1898.

The great power of the river and its tributaries has made the Saguenay Valley one of the industrial centres of Québec. The first power station was opened in 1925 at Isle-Maligne (402 000 kW). The huge dam at Shipshaw (896 000 kW) was built during WWII to feed the gigantic aluminum smelter at Arvida (now Jonquière).

A number of its tributaries experienced severe flooding in July 1996 that greatly affected 3 communities along its banks (Chicoutimi, Jonquière and La Baie). The Parc du Saguenay preserves land on either side of the river, from near Chicoutimi to Tadoussac; Saguenay-St Lawrence Marine Park protects the waters of the fjord.