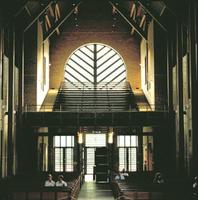 The community was founded by Dom Paul Vannier in 1912 when he acquired a farm at Point Gibraltar, a peninsula sloping down towards the lake. He and 3 other monks began farming and providing religious services. The sudden death of their founder in 1914 and the outbreak of WWI broke the links with their community in Europe. This nearly meant the collapse of the new foundation. Elevated to the rank of abbey in 1952, the community grew until 1955, when it numbered 79 members.

In 1939 the abbey began the construction of a more monumental monastery than the farmhouse they had occupied. The new monastery was designed by the well-known French Benedictine architect Dom Paul Bellot, and a hostelry designed by Dom Claude-Marie Côté was added in 1955. In 1994 a monumental new church, designed by the Montréal architect Daniel S. HANGANU, was inaugurated.

In addition to spending a large part of their time in meditation and prayer, and conducting elaborate liturgical services accompanied by Gregorian chant, the monks perform intellectual and manual labour. They also welcome visitors wishing to spend some time in a peaceful environment.