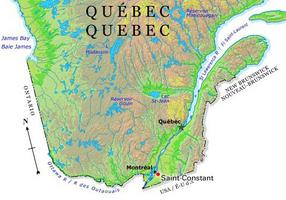 The early settlement of Saint-Constant dates back to the mid-18th century, even though the parish of Saint-Constant-de-la-Prairie-de-la-Magdeleine was only officially created in 1841. The parish got its name from Constant Le Marchand de Lignery (1663-1731), a well-known French officer who came to Canada in 1687. His son Jacques was in charge of the mission at Saint-Constant for a number of years. The small parish suddenly came into its own when the railway reached it in the 1850s. Saint-Constant and neighbouring Delson soon became important railway centres on the lines linking New York and Montréal. It was incorporated as a parish municipality in 1855.

Saint-Constant is now the site of one of North America's better-known railway museums, Museé ferroviaire canadien, a prestigious collection of 130 railway locomotives, railway cars and tramways. Even though the city contrives to evolve as a residential community, 79% of its area is used for agriculture. With an increase in population of 186% since 1976, Saint-Constant is the fastest-growing municipality of the regional county municipality of Roussillon.